Manu Ginobili led all Spurs with 16 points and the bench scored 65 as the Spurs cruised to their 11th straight win.

Have you ever seen Pelicans strutting around, showing off? Well let me tell you, it isn't pretty. I saw it in person last night and couldn't believe my eyes.

With 4:32 remaining in the 3rd quarter Pelican Anthony Davis caught a pass high in the air from Pelican Tyreke Evans and dunked it, in a play called an "Alley-Oop." Spurs fans and players were confused as to what just happened. Around here we like seeing bounce passes and fundamentals and winning 13 out of 14 games.

Fortunately, that's exactly what the Spurs gave us.

Seven Spurs scored in double figures for the game and the Vegas Lineup of Manu, Marco Belinelli, Patty Mills, Tiago Splitter, Boris Diaw and Matt Bonner (because Bonner has to spell Diaw when the Vegas Lineup is rolling) stretched the lead to 10 early in the 2nd quarter en route to taking a 57-40 half-time lead. In the 3rd quarter the Spurs extended the lead to 26, even with the very odd Alley-Oop play that still has me a little freaked out, and then got Nando some minutes in the 4th to finish things out.

It has to go to Manu as he plowed Pelicans like he was driving one of those swamp boats in the Louisiana bayous where all the wild Pelicans ravage the swamps. Manu had 16 points in 19 minutes on 6 of 7 shooting including making 4 out of 5 from the 3 point line. Throw in 5 rebounds and 6 assists and Spurs fans start dreaming about things. 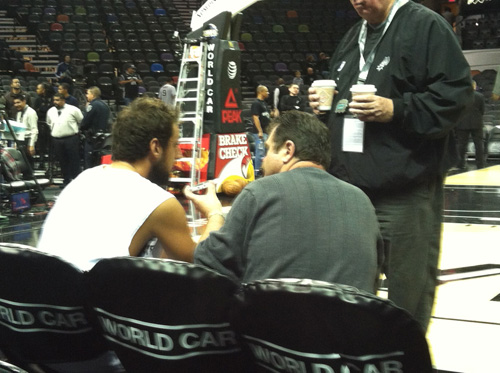 To my knowledge, tonight was the first "Marco has a high basketball IQ" from Pop of the season. Usually hear that about new guys to team.

Anthony Davis on the loss to the #Spurs, "We didn't wanna play ... We didn't care." .... So that is that #Pelicans pic.twitter.com/KZN84jMjiC

The Pelicans had 16 more field-goal attempts than the Spurs tonight, and lost by 19 points.

It's time to start wondering if Boris Diaw is a top-five player in the history of the game.

Going forward the Spurs need to:

In his pre-game interview Pelicans coach Monty Williams was asked if he's had a chance to watch the Spurs this season. "Every game," he replied.

"What do you see?" the reporter asked.

That's not a Pelican strutting around. That's a Pelican showing respect.

Spurs fans get caught up in the soft schedule and the deficiencies and all the bad things that can happen, but around the league people see the Spurs playing Spurs basketball.

And that's a good thing.