Which Western Conference point guard is best at finishing around the rim?

Guest Columnist Phil Naessens of the Phil Naessens Show shares his short list of Western Conference point guards and how they finish at the rim.

Share All sharing options for: Which Western Conference point guard is best at finishing around the rim?

I’ve always been a fan of point guards. These dudes usually play the most minutes, have the ball in their hands most often, and when they're not dropping amazing dimes to their teammates they're showing off their smooth-as-silk moves taking their defender to the rack. My favorite of all time was Nate Archibald. "Tiny" may not have been the best, but he was the man in my eyes.

Last week J.R. Wilco and I were talking about something or other and I brought up Russell Westbrook. We both really like this young fella and Wilco said how much he loved to watch that kid elevate and finish. That got me thinking and, thanks to NBA.com opening up a new world for us in the form of exhaustive sabermetric stats and the crazy hours I keep, I decided to have a look at just how good Westbrook really is at finishing at the rim. Then I decided to compare him to some other point guards from around the Western Conference and see just how he compares to these great point guards.

Please keep in mind, fellow Pounders, that this isn’t an exhaustive list. There may be some names you feel I left out. If there are any that you feel should be added please do. These are just some guys I was thinking about, got nosy and decided to share my findings with you.

Let’s start with the cause of it all: Russell Westbrook. That’s my man Third Row. I call him "Third Row" for the occasional pass he sends to an unsuspecting fan seated in the third row. Check out his shot chart, courtesy of NBA.com. 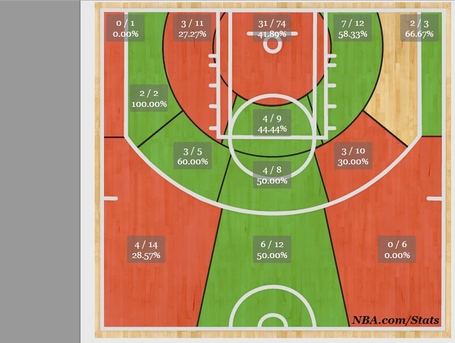 As you can see, Westbrook is making roughly 42% of his shots within an 8-foot area. As you can also see from looking at the right of this chart red sections mean he’s below the NBA average from that area. Some would take that chart and claim "Third Row" isn’t a very good finisher at the rim, but let’s remember this red zone is 8 feet and in so let’s look a bit deeper and check out the stats once again provided courtesy of NBA.com.

Westbrook is 30 for 65 in the restricted area. That means that most of those shots we saw in the red zone were actually closer than 8 feet. That’s 46%, which is a bit better than what the red zone area demonstrated. 46% of those came off of drives to the hoop while 53% came from teammates giving up the rock. He’s also had 8 of those attempts thrown out of the gym from 4 feet and in -- not too shabby for a point guard, but let’s take a look at a few others around the West and see how he compares.

Clippers floor general Chris Paul is regarded by many as the best point guard currently playing in the NBA today. This guy seems to be able to do it all except win a championship but how good a finisher at the rim is "CP3"? Let’s visit his shot chart below. 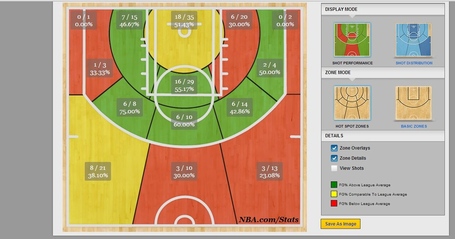 CP3 has finished 18 of his 35 attempts from less than 8 feet from the cup. That’s much better than Westbrook, isn’t it? He’s league average where Westbrook is below average. Let’s see how he compares with Westbrook from the restricted area

Paul is 13 for 23 from the restricted area. That’s 56%, much better than Westbrook. All of these shots came from drives to the basket. Needing no help, he does it all by his lonesome. Only two of these drives were blocked as well. He doesn’t go to the rack as often nor has he been on the receiving end of any teammates' passes, but when he does go to the cup he's a much better finisher than Westbrook.

Next up is Golden State's Steph Curry. Man, oh man, do I love watching him shoot the ball, don’t you? Curry is so much fun to watch but we aren’t talking about long ball shots we are talking about finishing at the rim so let’s take a look at his chart. 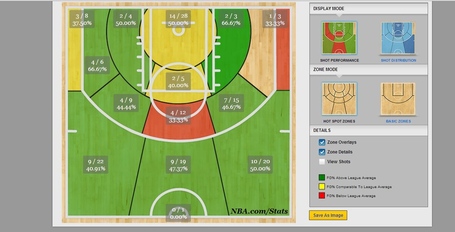 Curry is 14-28 from 8 feet and in. 50% is better than Westbrook and just about the same as Paul from 8 feet. That’s league average in that department but let’s take a look at where he stands in the restricted area.

Curry is 11-20 from the restricted area. 55% is better than Westbrook and nearly the same as Paul. 73% of those came on his own drives and 27% came from teammates assists. The thing that stands out, at least for me, are the zero shots blocked. Maybe he’s more crafty or just plain luckier, I dunno.

Next up is ’s Ty Lawson. Many people tried to tell me Lawson is the next great point guard in the NBA but I don’t see it yet. Maybe one day he will be, who knows -- but what kind of finisher is he? Let’s visit his shot chart and see. 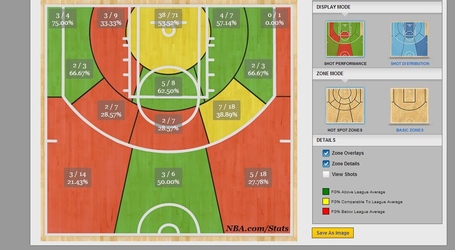 Lawson is 34-61 good for 55%. 85% of those came from his own drives and 15% were from a teammate's help. He’s better there than Westbrook and very similar to both Curry and Paul. 12 of those shots were jacked on him that tells me the big boys like to see Lawson down there to boost their own stats but that’s just the Fantasy Basketball lover in me.

Next up is the Grizzlies' Mike Conley. I’ve enjoyed watching him come into his own these last two seasons and as far as I’m concerned the sky is the limit for this young man. Let’s take a look at his chart and see where he fits into this crowd. 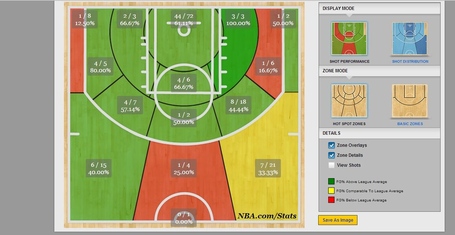 Conley is 44-72 from 8 feet and in. He’s above average in this area of the court and to be perfectly honest I’m not at all surprised by this. He blows Westbrook, Curry, Paul and Lawson away. At least from 8 feet and in he does. Let’s see how he fares in the restricted area.

Conley is 39-54 good for 72%. 66% came on his own and 33% came on assists from his teammates. 6 of those attempts were blocked but clearly Conley is far more accurate and efficient finishing at the rim than Westbrook, Paul, Curry or Lawson thus far this season.

That leaves us with the last on my list, Tony Parker. The guy has been getting it done for so long it isn’t funny but how good is he compared to the rest of this gang of fearless men when it comes to finishing at the rim? Let’s visit his chart. 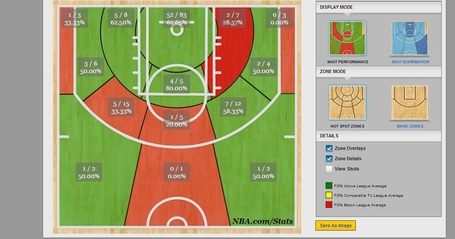 Parker is 52-83 for 62%. He’s above league average from 8 feet and in and only Conley has a higher percentage than Parker does but is he a better finisher at the rim than Conley and the others? Let’s check it out.

Parker is 43-67 good for 64%. 72% came on his own and roughly 28% came from assists. He’s had 6 of those attempts stuffed, but he’s more efficient than Westbrook, Paul, Curry and Lawson but not nearly as accurate as Conley.

Fellow Pounders and guests, this list I compiled was in no way meant to disparage any of these awesome point guards. I think they are all fantastic and have so many other dimensions to their respective games and what they mean to their teams my fingers would fall off and your eyes would bleed trying to list and read them all. This just came from curiosity really and to be honest I would have thought Parker was more efficient. Guess I was wrong.

One thing I did find from putting this together is that when I watch these fellas ball and they do their thing in the paint I say either "cash money" or "not happening" when before I would say something like "nice move". It's made me appreciate not only the work only these young men put into their respective games but the coaches who devise plans to attempt to stop them.

Lastly, what I presented here is a small sample size so what I will probably do is revisit this around the All-Star break and see where they are then as opposed to now.