Fantasy basketball owners are heading into Week number five and, as always, owners are searching for players to meet their teams' needs. The most common question I'm asked is about big men, as they seem to find their way to the suit and tie brigade more often than most so I thought today I would give you three big men who might be worth a look.

Robin Lopez: If rebounds and blocks are what you are looking for then why not have a look at Robin Lopez of the Portland Trailblazers? Lopez is averaging almost 8 rebounds in roughly 29 minutes a game. He certainly isn't a Marc Gasol, but he can at least keep a team afloat. Portland has three games this week (New York Knicks, Phoenix and the Lakers) so he will have some opportunities to help out your team. Lopez is currently owned in 17.6% of ESPN leagues and 58% of Yahoo leagues. (Stats)

Samuel Dalembert: Another center that has been very consistent this fantasy season is Dallas Mavericks center Samuel Dalembert. He'll get you consistent numbers in points (7.4) rebounds (7.5) and blocks (1.8), but also shoots 55% from the floor and 81% from the line so he definitely won't hurt the fantasy owner. As with Lopez, Dalembert is no Al Horford but he will provide some relief if Gasol is out for a good stretch of time.  Dallas plays four games this week (Denver, Golden State, Atlanta, Minnesota) and he's owned in just 4.6% of ESPN Leagues and in 51% of Yahoo Leagues. (Stats)

Jason Smith: I've always been a fan of players with dual eligibility and the New Orleans Pelicans' Jason Smith, eligible at both the Power Forward and Center positions, fits the bill to a tee. Smith has decent numbers in minutes played (27.5), points (10.7), rebounds (4.8), and blocks (1.3), and he also shoots 53% from the floor and 88% from the line, making him an attractive option if one of your big men goes down. New Orleans has four games this week (San Antonio, Golden State, Philadelphia and New York) and Smith is owned in 5% of ESPN Leagues and 21% of Yahoo leagues. (Stats)

Spurs Fantasy Pick of the Week

Staying with the big-man theme, another player that might be worth a look is Tiago Splitter of the Spurs. He's probably just as good, if not a better option than the fellas above. While he does average less minutes (22.9), his numbers are comparable in points (8.8) and rebounds (7.6). He also shoots 57% from the floor and 72% from the charity stripe. Depending on the matchups and situations, Splitter can see his minutes increase and decrease. It's all part of being in coach Gregg Popovich's system. The Spurs have four games this week (New Orleans, Oklahoma City, Houston and Orlando) and he will see minutes in all four contests and is owned in 9.5% of ESPN leagues and 59% of Yahoo leagues. (Stats)

Kyle McKeown from Rotowire and I discussed the recent injuries to Derrick Rose, Marc Gasol and Andre Iguodala, and answered your fantasy basketball questions about Trey Burke and others; Tom Lewis from Indy Cornrows joined me to talk Indiana Pacers and preview Mondays game with Minnesota and Grizzly Bear Blues Joe Mullinax and I talk Marc Gasol, recap their home loss to the Spurs and preview Mondays game with Houston. You can download this here or listen to it on the player below.

Week 4 of the Pounding the Rock Fantasy Basketball League has finished and there were plenty of close matches. Standings after Week 4 are below; 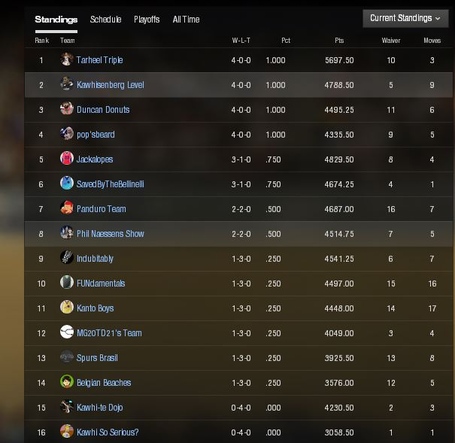 Thanks fellow Pounders for taking time to read and as always I'm looking forward to your input!