How will the Spurs defense fare through the next ten games?

After facing a lot of mediocre to bad teams, the Spurs' defense will be tested in the upcoming ten-game stretch

Share All sharing options for: How will the Spurs defense fare through the next ten games?

The Spurs' schedule has been unusual. The team has had four BABAs already and an atypical four-day rest. When you think about it, starting a season and trying to get in rhythm by interchanging periods of excessive activity and long breaks is rather brutal. Fortunately, the Spurs were lucky enough to face a lot of easy opponents to start the season, which has allowed them to monitor minutes and experiment with rotations without actually costing them in the W column.

Spurs at the top of league Power Rankings 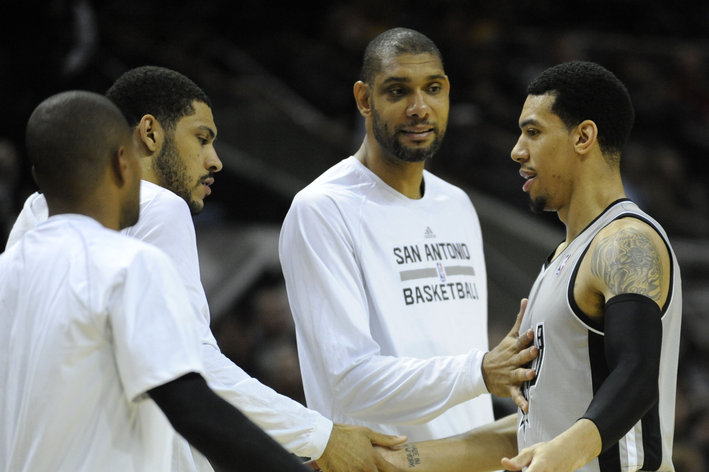 With some teams dealing with major injuries, San Antonio keeps on winning - and having fun doing it.

The Spurs have faced a few good teams, of course. The Grizzlies and the Warriors are virtual locks for the postseason, while the Blazers surprised everyone with a scorching-hot 12-2 start. In the four games against those good Western teams, the team is 3-1, with the loss coming in Portland. Out of the remaining nine opponents, only two currently have a record of .500 or better: the Suns and the Nuggets, which are both at 6-6*. The busy schedule was balanced out by what SAEN's Dan McCarney eloquently called "a veritable baker’s row of offensive cupcakes," which somewhat might have helped the Spurs' defensive numbers.

The next ten games, however, are going to be much harder and should reveal just how good the Spurs really are.

The Spurs will face six teams that are at .500 or above and will be on the road against three weaker teams in Milwaukee, Toronto, and Orlando. There will be two match-ups with a Wolves team that has always challenged the Spurs, even when they were not playoff-bound like they are now. There are two games against Western conference contenders, as Durant, Westbrook, and the Thunder will host the Spurs, while Harden, Howard, and the Rockets will visit the AT&T Center. There will also be a game that could re-shape the top rankings as the Spurs battle the Pacers in San Antonio.

It all starts with the Pelicans visiting on Monday. New Orleans stands at 6-6, but their margins of victory suggest they should have one more win. Anthony Davis is having a monster sophomore season, and, although the Pels' perimeter rotation of Jrue Holiday, Tyreke Evans, and Eric Gordon has yet to live up to its potential, they have enough scoring power to rank in the top ten in offensive rating. They are an athletic team with a top-tier big man and an elite stretch 4, and those have always caused trouble for the Spurs.

After that, the Spurs will visit the Thunder, who are finding their groove on offense now that Russell Westbrook is back from injury. OKC has won their last four games and will be hosting the Spurs after a three-day break. Even without Harden or Kevin Martin, the Thunder are an elite team thanks to their league-best one-two punch of Westbrook and Durant. Their youngsters are also picking up the slack, with Jeremy Lamb and Steven Adams looking better than anticipated and Reggie Jackson continuing to impress.

The Spurs' next game comes in Orlando, where the Magic are 4-3, with the losses coming against the Heat and the surprising Suns and in a close game against the Celtics. The Spurs should beat them with relative ease, but make no mistake: there is talent in Orlando. Arron Afflalo is playing like he wants to be traded to a contender, averaging 22 points, five boards and four assists on a ridiculous 52% from three. Nikola Vucevic is a double-double machine; and they have scorers with rookie Victor Oladipo and veteran Jameer Nelson at the guard position and Andrew Nicholson and Maurice Harkless at forward.

The next day the Spurs will face the Rockets at home on a SEGABABA. That game has "DNP-OLD" written all over it, as Pop has usually chosen to play his stars in the theoretically easier game and rest them against the superior opponent. Even at full force, the offensive juggernaut that is the Rockets should be hard to beat.

Coach Bud and his Hawks are up next for a game that the Spurs should win, at least on paper. Yet the Hawks seem to be better than their record indicates, and the combination of a speedy point guard and two of the best jump-shooting bigs in the league in Al Horford and Paul Millsap could prove challenging. Coach Bud's familiarity with the Spurs' system should help him exploit the Spurs' defensive weaknesses, and Danny Green will have to be extra careful when guarding Kyle Korver on the perimeter, as things could get out of hand.

The match-up that interests me the most is the Timberwolves. The Spurs will face them in Mexico City after the Atlanta trip and again on a FIGABABA at the AT&T Center to end the ten-game run. Even when Darko was starting at center, the Wolves were a nuisance. Now that they have a great starting five with a healthy Kevin Love, they could become a full-on problem. With Ricky Rubio orchestrating the offense, Pekovic banging inside, and a mature Corey Brewer as the glue guy, the Kevins (Martin and Love) have the freedom to be the devastating scorers they were born to be. Considering that the Wolves are a likely first-round opponent, I'll be much more relaxed if I see the Spurs figure them out in their first two season match-ups.

I can't see the Spurs losing to the lowly Bucks or the spacing-challenged Raptors, so that leaves the Pacers. After a few games of facing elite offensive teams, the Spurs will have to battle an elite defensive squad. George Hill and friends have only lost to the Bulls so far, but they have had an easy schedule thanks to playing in the Leastern Conference. When they face the Spurs, they will be in the fourth game of a five-game West swing that includes games against the Clippers, Blazers, and Thunder. If they survive unscathed, they will become bona fide contenders or even the front-runners in the East.

The Pacers have ridiculous length and an asphyxiating defense that will test the Spurs ability to score when staying big. Indiana's bench, once a glaring weakness, is now much improved thanks to the additions of The One That Got Away and C.J. Watson to go with the steady if unspectacular Ian Mahinmi. When/if they get Granger back, they will be one of the, if not the deepest team in the league. There are no must-win games in the regular season, but if the Spurs want to send a message that they are a team to beat, a victory over the Pacers would go a long way towards turning them into early favorites.

The Spurs have looked great so far, and I wouldn't be surprised if they finish the tough ten-game stretch 8-2, with a scheduled loss to the Rockets and a defeat at the hands of either the Pacers or Thunder. But realistically, the worst-case scenario of 3-7 is not out of the question -- not with so many winning teams looking to knock them off. So buckle up, Pounders, because the next ten could be a bit bumpy.

*The Suns are now 7-6 after beating the Magic

MORE FROM Pounding the Rock