What have the Spurs been doing with their days off?

The Spurs started the season playing at a very high level and these four days to practice can only help them keep improving.

Share All sharing options for: What have the Spurs been doing with their days off?

It's hard to get time off to practice in the NBA. With the SEGABABAs and the FOGASINIs, the schedule is pretty full. So far this season, since their first game on October 30, the Spurs have had a single two-day break, and it was between their third and fourth games. That meant they played seven games in 11 days, including the dreaded FIGASENI: five games in seven nights. It's the most games the NBA has a team play in a week, and it begins with games on back to back days, followed by a rest day, a game day, and another rest day before finishing with two more games back to back. That's the stretch the Spurs finished with last Wednesday's Wizards game.

But after they played the Jazz on Friday, they were greeted with four straight rest days. The Spurs won't have a rest like this again until the All-Star Break in mid-February, so they need to make it count. Gregg Popovich has stated multiple times that he doesn't put the team through a practice unless there's more than one day in between games. So it's safe to say that they've been practicing. Which begs the question: what have they been practicing?

Even a team with a 9-1 record can take advantage of these four days off to polish the little things. Surely Pop has some areas he wants the team to work on, but I couldn't resist coming up with a few things I'd love to find out the Spurs have been doing over the past couple of days.

I really like what Jeff Ayres has been bringing to the table on defense. He clearly has been better than Baynes on that end and seems to have solidified his place in the rotation. But there's still room for improvement, mostly on his understanding of his teammates's strengths, weaknesses and tendencies.

Here, we see the Suns using a lot of player movement before starting a pick and roll involving Channing Frye and Ish Smith. Ayres is on Morris, who can hit from outside, so he has to stay close to him.

The mistake here is Kawhi Leonard's, who isn't as experienced guarding the ball handler on pick and rolls. Kawhi goes for a hard show, which allows Smith to cross over and attack. But as the sole big involved, Ayres needs to be there to cover that lane. Without a presence inside, those small-ball lineups just don't work.

In this next play, the mistake is again not Ayres' per se. Tony Parker usually funnels his man to the big, who needs to be there to close the lane. He shifts his body here, prematurely anticipating a pick. 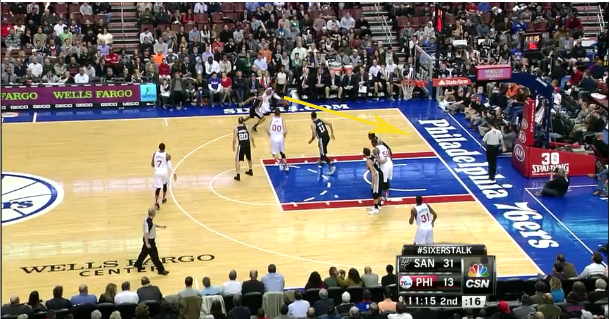 Without the big there, the ball handler can simply drive in a straight line. Once again, Ayres is guarding a stretch big, but he is being asked to be the team's defensive anchor and needs to be able to help and recover consistently in order to avoid breakdowns.

Always being in rebounding position

Ayres' is mostly sharing the court with Boris Diaw and despite his amazing play this season, Boris still isn't a great rebounder. Considering the Spurs usually use Manu Ginobili at SF with the bench unit, the situation on the defensive boards is precarious. So Ayres needs to always be ready to lend a hand, even if it seems the Spurs are going to come away with the board.

Here he contests a jumper after a pick-and-roll but then stands there looking to see if the team got the board, presumably with the intention of leaking out.

That's not necessarily the wrong thing to do in every case, but with the teammates he's sharing the court with here, he needs to be hitting the boards -- regardless.

Here Jefferson is attacking a mismatch on Diaw and Ayres aggressively helps, forcing a miss 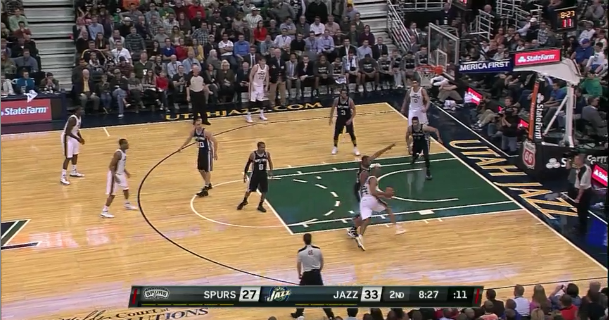 But after that he is completely out of position while not only Kanter but also RJ are right there under the basket. Ayres needs to try to not compromise his rebounding position so much when he helps.

These are similar problems to the ones Splitter experienced last season, which means they will likely take time to solve, but they won't kill the team on defense in the meanwhile. Still, it would be fantastic if he could clean them up, as having another plus defender would allow the Spurs to keep experimenting with lineups.

Shooting drills for Manu and Kawhi

Ginobili's spot up three pointers often look good coming off his hands. There have been more rim outs than awful clanks, but misses are misses and getting back into a comfort zone through repetition has to reap rewards. But what Ginobili really needs to focus on is on practicing off the dribble threes after ball screens. Manu has missed all six of his threes coming out pick-and-roll situations and he needs that shot to fall, as big men are sagging further and further back to deter penetration. Ginobili has traditionally been able to at least be a threat to hit that shot and he needs get back to that.

Unlike Manu, Leonard's shots don't look good at all. Along with Ginobili's and Duncan's shooting woes, Leonard's struggles have gone mostly unnoticed, but Leonard is shooting a terrible 28% from three. Considering spot ups are still a huge part of Leonard's offense, he needs to go back to hitting open shots, especially from the corner. It's possible that Leonard neglected his spot up shooting a bit while looking to develop more weapons this off-season. But taking Saturday through Tuesday to go back to basics could help him return to being a deadly spot-up option. If he does that, the floor will open for him to attack those hard close outs.

Practice pick-and-rolls with Duncan as the dive man

I'm not overly worried about Tim Duncan's offensive struggles because I doubt he forgot how to shoot over the off-season. Duncan has averaged well over 40% on mid-range looks on a significant amount of attempts for the last five seasons and has been deadly on pick-and-pops with Parker. You don't just lose that skill overnight, even if Father Time is starting to get to you. And Duncan has looked fine in other facets of the game, so this is lilely a cold streak he will play his way out of. But the Spurs can help him do that by finding ways to jump start his offense.

Timmy needs to keep taking that jumper, both because it helps the offense when he is hitting it and because it allows him to put up points without as much wear and tear on his body. But maybe mixing up those pick-and-pops with some old fashioned pick-and-rolls could help get him out of his offensive funk while at the same time getting him to the line more often. The Spurs have been abysmal at earning trips to charity stripe, ranking last in free throw rate by a wide margin, and the amount of mid-range jumpers they have been taking is a big reason why. Duncan, for example, has taken only 52 shots in the paint versus 46 from mid-range. It's not surprising that he is currently at a career low for free throw attempts per 36 minutes.

Since the default setting on the Tony and Tim two-man game is to go to the pick-and-pop, having Tim share the court with Manu a little more and run some screen and rolls with Ginobili could yield better results. With Diaw actually taking shots now, the floor should be well-spaced, and Duncan has the hands, touch and instincts to be a deadly scorer as a dive man. Once he gets going offensively, he can go back to the more perimeter-oriented game he has worked so hard to develop. But it could benefit both him and the team to mix things up a little right now.

Stats and images courtesy of NBA.com and MySynergySports