The San Antonio Spurs beat the Washington Wizards 92-79 Wednesday night as the Silver and Black improved to a West leading 8-1 while the Wizards fell to 2-6. This was a THIGAFONI for both the Spurs and the Wizards, but the Spurs had the previous night off while the Wizards were busy losing to the Dallas Mavericks. The Spurs were in control for most of the game, though the Wizards did make things interesting in the third quarter. In the end, the Spurs prevailed for their sixth win in a row.

Three games ago the Spurs were 5-1 and I was nervous. The Spurs looked less than crisp and although they had won five games and only lost one, it felt as if they were extremely fortunate to boast such a record. And then the Spurs traveled to the northeast to visit Madison Square Garden and they regained their Western Conference Champion form.  The ball moved, Danny Green hit shots and the Spurs played their first complete game of the young season. They humiliated the New York Knicks, 120-89, and made Larry David do this. 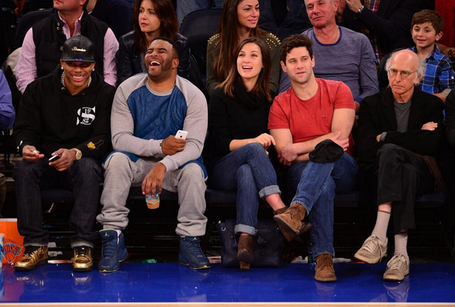 (Did I bring up the Knicks just so I had an excuse to post this pic again? Yes.)
via pbs.twimg.com

The next night the Spurs found themselves in Philly playing a team that had already registered wins against the Heat and Bulls. Adding to their resume, the Sixers beat Houston in overtime tonight. None of this mattered against San Antonio. The Spurs continued their fantastic play, even with Tim Duncan resting, and won in a rout over the early media favorite 76ers.

And all this brought us to tonight's game. Coming back home hot, one expected the Spurs to continue where they had left off in the East and execute great basketball on both sides of the floor. Most looked at the Wizards' 2-5 record and chalked up a win. However, the Wizards' record is deceiving. This is a team that will probably be in the playoff hunt come March.

They've just had an extremely difficult schedule to begin the season. So far they've played the Pistons, Philly twice, the Heat, the Nets, OKC, Dallas and the Spurs. 2-6 is understandable and their team statistics aren't going to be great indicators of what to expect from them over the 82 game season, (especially in the LEastern Conference).

Wednesday night the Spurs came out strong, as they had in their previous two games. The Knicks called their first timeout down 10-0, the 76ers called time down 14-7 and tonight the Wizards stopped the action down 12-3. I wouldn't mind if that trend continued for another 89 games, (73+16, sweeping all the way). Kawhi Leonard led the charge scoring the game's first eight points.

Despite the quick start, the Wizards managed to keep the game fairly close with the help of the Spurs' five turnovers in the quarter. Also helping the Wizards was Tim Duncan's jump shot. He finished a miserable 1-12 in 26 minutes. After one, the Spurs led by eight, 25-17.

In the second quarter, San Antonio built their lead to a peak of 19 points with 6:35 remaining in the half, but were unable to sustain it. Again, this Wizards team isn't that bad. John Wall leads upstart Bradley Beal and veteran Trevor Ariza in the backcourt while their frontcourt consists of Marcin Gortat and a player that always seems to play the Spurs well, Nene. Off the bench they have Martell Webster, whom I've always been a fan of. He has a little Gary Neal in him. Washington managed to shave the 19 point lead to ten points by halftime.

In the third quarter the Wizards continued to claw their way back into the game. With three minutes remaining, they cut the Spurs' lead to three points, 57-60, effectively silencing the home crowd. That's when PaCoNobili took the game over. I'm open to suggestions on what we should call PAtty mills, marCO belinelli and manu giNOBILI moving forward, although PaCoNobili is growing on me. The point is we need a name for them because we'll be talking about this trio a lot as the year progresses.

PaCoNobili has to be the most entertaining trio coming off the bench in the entire league. PaCoNobili, joined by Tiago Splitter and Jeff Ayres, closed the quarter on a 10-0 run. The collective basketball IQ of PaCoNobili was just too much for the Wizards to withstand.

Gregg Popovich started the fourth quarter with PaCoNobili and they continued to streak until the game got out of hand and Pop called the dogs off. Pop substituted Cory Joseph for Patty Mills up 81-59 with 8:25 remaining. PaCoNobili went on a 21-4 run to blow the game wide open. It was one of the most entertaining runs I've seen in years.

--  As I mentioned, Tim Duncan made just one of his 12 shots in 26 minutes. He's shooting just 43.7% from the field so far. Obviously, we're only nine games in and it'd be silly to panic, but it's something to keep an eye on. At least he's healthy and looks to be in fantastic shape.

--  The 76ers beat the Rockets tonight and James Anderson exploded for 36 points. I was never a fan of his. I don't like it when professional athletes have baby fat. It bothers me. In a related story, I can't get into baseball. Baby fat or not, it's difficult to discount 36 points against this year's Rockets.

-- The Spurs wore their new camo uniforms today and were difficult to spot. Honestly, they kind of blended into the background. The Wizards wore white so the contrast between white on wood and camo on wood probably exaggerated the situation, as did my poor eyesight, but apparently camo really works. I thought they looked pretty cool, for what it's worth. You know, when I could see them.

--  Jeff Ayres is growing on me, and it's not just because his uncle will get mad at me in the comment section if I make fun of him. Even though his three missed dunks in the last game were funny, I liked that he kept trying to dunk it. I've watched other guys miss a dunk and immediately become passive. Ayres missed and wanted the rock. Also helping things is the fact that he stopped shooting that funky mid-range jumper. Hustle, dunk, defend and rebound. That's all he needs to do to be successful on this team and I think he's figuring it out.

--  Boris Diaw is playing at a level I haven't seen out of him since his Phoenix days. He is the exception to my baby fat rule. 15 points, five rebounds and two assists with a +/- of +20. Incredible.

--  Tiago Splitter also played a great game. He scored 12 points making five of seven shots, grabbed nine boards and had a +/- of +20 in 24 minutes. It was easily one of his best games of the early season.

--  Basically, everyone else played a mediocre to poor game aside from PaCoNobili. Tony had five turnovers, Tim missed everything, Danny Green cooled off and Kawhi was more quiet than anything. But, PaCoNobili was more than enough to ensure a comfortable win against the Wizards.