Last night was San Antonio's first meeting with Brett Brown's team since he left San Antonio to take the head coaching position in Philadelphia. It wasn't much of a contest. 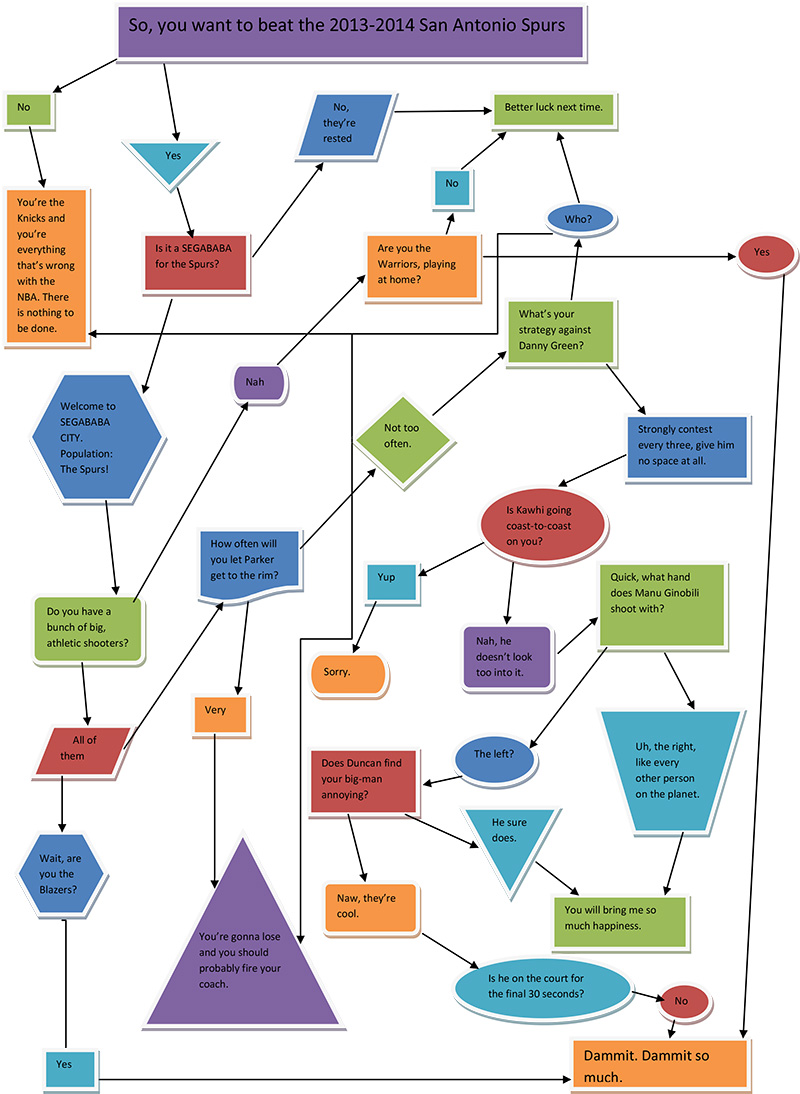 click on the image for a larger version of the flowchart

"It's no fun at all. If you win, you sort of feel bad. If you lose, you sort of feel happy for him. It's a weird feeling because you're supposed to want to win. When I coached against Larry (Brown), we both hated it every time."

5:02: Fourth quarter minutes for Tony Parker, for some reason.

11: Made threes out of 16 attempts for Danny Green the past two games.

5: Turnovers for Boris Diaw. That's too much butter on them croissants.

4: Steals in 19 minutes for Patty Mills, including two (and nearly a third) off an in-bounds after a made basket.

3: Missed dunks by Jeff Ayres, who I'm starting to grow weary of already.

100: Three-point percentage by Manu Ginobili, who sank both of his attempts from down town.

0:00: Second-half playing time by the Argentine.

29: Assists for the Spurs, a season-high.

2-of-11, 4 assists, 2 turnovers: Now that's what I thought a typical Michael Carter-Williams line would be like this season.

Sequence of the Game:

Just by reading Pounding the Rock, you qualify for big discounts on tickets for upcoming Spurs games.

Already up 24-13 late in the first quarter, the Spurs stole the ball on three consecutive Sixers possessions, the last one an especially cruel in-bounds swipe from Mills, and turned that bit of thievery into seven points on a Ginobili three, a Mills layup and a short Belinelli jumper, to finish off the quarter at 31-13 and essentially put the game to bed.

Popovich and Brown had a long, warm exchange before the game, but after the final whistle they didn't shake hands or even acknowledge each other, as Brown made an immediate beeline for the tunnel. My guess is he was so disgusted and embarrassed with his team's sloppy play and lack of effort he couldn't even look his mentor in the eye. Also, I didn't see any long twos from Belinelli, so I think somebody got in his ear about not doing that. I really liked how Belinelli and Ginobili worked together in the first half.

The Spurs are the only team in the top 10 in both offensive and defensive efficiency.

James Harden has been fined $5,000 by the NBA for violating the league's anti-flopping rules for the second time this season.

No Timmeh tonight; how on Earth are we going to stop the front line of Thaddeus Young, Spencer Hawes and Lavoy Allen?!

so when Pop decided to make Kawhi a feature in the transition offense, I think he also made a point to teach Danny how to rebound.

Tiago only eats half of his meals. Says he just can't finish. HAHAHAHAHAHAHAHA #TwitterJokes #SplitterJokes

Did the Sixers learn how to tank over the weekend?

Tony Parker has this fascinating ability to get his right handed layup off a split second early, preventing the big from a block chance.

Oh poor Jeff Ayres. Will you ever get the dunk you so strongly desire?

3. Manu Ginobili (3 pts): Led the bench unit that broke open the game, sank both his threes.

2. Patty Mills (8 pts): His defensive energy wrecked the Sixers offense and seemed to demoralize them.

Vs. Washington (2-4), Wednesday, Nov. 13: For once the Spurs will be the more rested team, as they'll host the Wizards on a SEGABABA for them, with Washington having to play at Dallas on Tuesday. Not that they owe the Wiz any sympathy, mind you, after the way they stupidly blew a double-digit lead late at Oklahoma City on Sunday. (Thanks for nothing, fellas.) Second-year man Bradley Beal had a career-high 34 points in the game and Trevor Ariza and Martell Webster are three-point threats as well. John Wall is the kind of guy who Parker will look to torch early and often. The Spurs, and their gross camo unis, by 16.