San Antonio was ruthless, efficient and hungry in its first east-coast game, blowing out a Knicks team that didn't seem to show up for the early start.

Well, that was anticlimactic.

The Spurs' early-afternoon tilt opposite the NFL was the personification of the classic sports bar argument about basketball, the timeless debate about what's more entertaining to watch, college hoops or the pro game.

The Spurs need to improve their shot selection 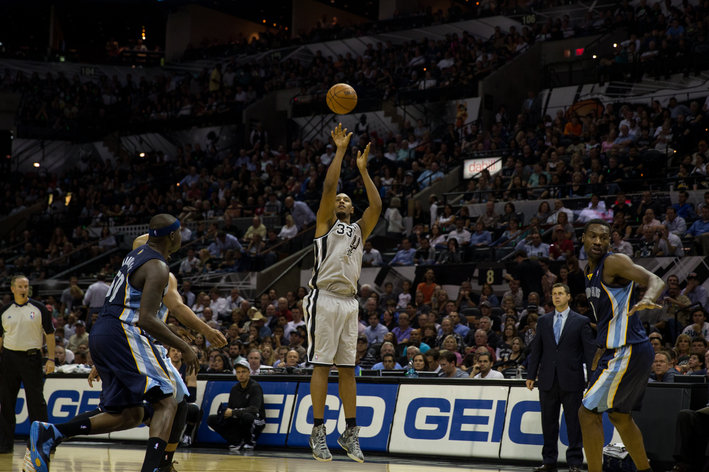 The Spurs have uncharacteristically been taking too many inefficient shots to start the season and it has wrecked havoc on their once elite offense.

I've always been a passionate advocate of the NBA for one simple reason: I don't ever want to watch anybody play ball on television or in person and come away thinking "I could  ____ better than that guy," whether it's shoot free throws, three-pointers, throw a post entry pass, what have you. I want to watch the best of the best. I want to see people play with five guys as one, to execute intricate plays, to knock down open shots all night long like it's nothing and to pull off breathtaking feats of athletic and acrobatic daring do that I couldn't imagine pulling off in a video game.

Exhibit A for why I greatly prefer the NBA is the way the Spurs played today.

Angry isn't quite the right word for it, but they had this edge about them that was hard to explain. Maybe annoyed is better. A bunch of annoyed, world-class professionals barely hiding their contempt at having to play opponents not worth their time. It was reminiscent of those early round Champions League games in soccer, where a superpower like Barcelona or Bayern Munich will be facing the token team from the Romanian league or somebody like that. It's a game that counts, it's vital that the favorites win, but at the same time you know Lionel Messi is thinking, "I can't believe I'm in freaking Romania playing on a Tuesday when I could be getting rest for Saturday's game against Real Madrid."

If that reference went over your head, here's a simpler one: The 1992 Dream Team versus Angola.

I don't know if Gregg Popovich laid into them after Friday's miserable offensive showing, or if the team was ticked about having to play what was, in effect, a morning game on Sunday with their body clocks all out of whack, but whatever frustrations they came in with they took out on the poor, hapless Knicks, who never had a chance in this one.

The Spurs were ruthless, brutal and efficient from the opening tip, racing to leads of 10-0 and then 26-9 and coasting from there. They exploited Andrea Bargnani: Lone Rim Protector (which sounds like a bad Saturday Night Live skit) time and again, with Tony Parker getting whatever he wanted on drives to the hole, Kawhi Leonard taking it to the basket with no resistance whatsoever and many, many wide open threes throughout the game.

This is why I prefer the pros: No college team could ever dream of executing on both ends of the floor as brilliantly as the Spurs did. They were a wonder to behold. Neo-ball, all game long.

Exhibit A for why many folks prefer the college game is the way the Knicks played today.

It'd be one thing if they were just terrible, if they just happened to shoot poorly, fumbled some passes into careless turnovers or were beaten into submission by a superior opponent. Fans can handle that. Sometimes it's not your day. What was troubling, pathetic and inexcusable from a neutral point of view is that the Knicks players - from Carmelo Anthony on down - looked completely apathetic, listless and uninterested from jump street. Not one guy came anywhere close to competing out there on Sunday. It was an embarrassing display in front of their home crowd. (You'll notice I didn't write "effort," because there wasn't any.)

I don't know whether Tyson Chandler's broken leg has crushed the collective esprit de corps of the Knicks so early into the season or if they, too, were put off by having to play so early, but none of them seemed to have even an ounce of faith coming into the game that they had a chance of beating the Spurs. You could see it in their collective body language. There seemed to be a unspoken understanding, "Let's just jog around and not get hurt out there and we'll save our energy for easier opponents against whom we have a fighting chance," or, if you're really cynical, it was more like "Who cares? We get paid the same either way."

I don't know if Mike Woodson had a game plan for the Spurs beyond "Wear really hideous neon orange jerseys and hope the Spurs forfeit out of nausea," but if their coaching staff had prepared a scouting report none of the players so much as glanced at it. Nobody seemed the least bit aware of who Danny Green was and what he specializes in. They treated Kawhi Leonard like he's some guy who can't dribble. They fouled Tim Duncan like he was DeAndre Jordan. It was all baffling.

Say what you want for the college game -- they can't shoot a lick, the point guards can't run any offense and the post games are abysmal -- but at least the college guys try hard every time out. No matter how unskilled and untalented the teams are, you'll never see a team lay a collective turd like that, insulting the intelligence of every fan and making them openly question why they wasted the time and money when there are so many other options for their precious little free time and disposable income.

We're damned lucky to be Spurs fans and this game was another reminder, far beyond the final score.

"I thought tonight we played a good, solid B+, A- game. There were some good things out there."

10: Rebounds for Tim Duncan, giving him his first double-double of the season.

10: Rebounds for Danny Green, a career-high, giving him his first ever double-double as a pro.

Sequence of the Game:

With 6:50 to go in the first quarter, Green leaped WAY up to emphatically swat a layup attempt from Raymond Felton (note: it could've been a goaltend) into the hands of Marco Belinelli. For once, the Knicks got back in transition, so the Spurs got into their halfcourt offense, with Parker on the left wing and Duncan posting up Bargnani. Parker gave Duncan a subtle signal and Duncan quickly spun behind Bargnani, sealing him off and leaving nobody in the paint to challenge the driving Parker, who scored an absurdly easy layup, prompting a dejected Woodson to call time.

In my preview for the game I had some immature fun at J.R. Smith's expense and it was immature and wrong. I feel like a bit of a dope, and I'm better than that. Anyway, Smith did indeed make his season debut for the Spurs, and to be perfectly blunt, he was pretty poor, shooting 1-of-9 with three air-balls and four turnovers. He has a chronic habit of taking some really bad, ill-advised shots. Still, it was only his first game of the season, he's obviously rusty and we need to realize that Smith is a streaky shooter who can score from everywhere when he's feeling good. It's not like he's some bum like Hasheesh Hasheem Thabeet, this guy can really play.

Just by reading Pounding the Rock, you qualify for big discounts on tickets for upcoming Spurs games.

Teams have often been picking up Danny Green near halfcourt early this season. Knicks maybe didn't get memo.

The Knicks are switching on PnR so far, which ends up putting Bargs on Parker. That's a matchup I can live with.

(I don't like having to rag on Bargs this much. He's just kind of terrible.)

On offense, the Spurs are really just going with whomever Bargs happens to be guarding. It's really kind of mean. Effective. But mean.

(Also known as The Bonner Strategy)

I'm sure Amare looks at Duncan like, "I used to KILL this guy 7 years ago. What happened to me?"

(Yeah, I used to kill this guy seven years ago while he kept bouncing my team out of the playoffs...)

Ginobili got after Parker a little after that play. Parker had him wide open in the corner, didn't get it to him.

(I mean, when you've got a man shooting a sweet 19.4 percent from three wide open, you gotta get it to him.)

Andrea Bargnani trying to drive by Tim Duncan off the dribble is adorable.

("Andrea, how advanced is your understanding of defense?" "Uh... kindergarten?")

The best offensive set play for Kawhi Leonard is a defensive rebound.

The Spurs are running with a lineup of Patty-CoJo-Nando-Ayres-Baynes. That's...uh...something.

@poundingtherock Those sure are five players with contracts to play in the National Basketball Association.

When's a SEGABABA not a SEGABABA? When A) it's a night game after a day game the day before, B) it's across a bridge from the last game and C) it's against a crappy Sixers team. Yes, the Sixers are technically second in the Eastern Conference at 4-3. They have wins over the Heat and the Bulls to their name. I'll be honest - I didn't think these guys would have four wins in 2013. Former Spurs assistant Brett Brown has them playing hard and believing, rookie point guard Michael Carter-Williams isn't making anyone miss Jrue Holiday, and they've got three other quality NBA players in Evan Turner, Spencer Hawes and Thaddeus Young. And James Anderson starts for them, which is amazing. I've talked so much trash about the Sixers already that it'd be karmic retribution for them to beat the Spurs, but I'll believe it when I see it -- Spurs by 14.