The Spurs should feature Kawhi Leonard in the post this year

Pop has said that Kawhi Leonard will see his role on offense expanded this season. The best way to do that might just be to have him work in the post as often as possible.

Kawhi Leonard had his national coming out party during the Finals and was arguably one of the best four players in a series that included six likely Hall of Famers. Gregg Popovich has said that he will be one of the cornerstones of the franchise as the "Big Three" era comes to an end. However, for that to happen, Leonard will need to get more actively involved in creating offense. Pop has said the team will start running plays for him, and Manu Ginobili confirmed that in interviews this week.

How will the Spurs feature Leonard on offense?

While everyone agrees Leonard needs to get more touches, no one seems to know how exactly the Spurs plan on expanding Leonard's offensive role. During his first two years most of Leonard's looks have come on two types of plays: spot ups and in transition. Kawhi is a dual threat in that he can shoot after kick-outs and drive if the defense closes out too strongly. His disruptive defense and athleticism make him a great break starter and a terror in the open court. Those skills make him a terrific role player but don't seem to be all that translatable in justifying a higher usage.

The Spurs use a lot of pick-and-rolls to initiate the offense, and Leonard has not had the chance to show he can work efficiently as a ball handler in those sets. Is he a creative, or at least proficient, enough playmaker to take some of the pick-and-roll touches Manu has been getting? It doesn't seem like it, at this point. His ball-handling is good for a complementary player, but if defenses key in on him, he might not be able to keep his dribble alive, much less attack in isolations. He is a good enough shooter that using him coming off screens could be a possibility, but Danny Green seems better suited for it.

In an admittedly ridiculously small sample size, Leonard was the leader in points scored per possession in the post last season, according to MySynergySports. The PtR people that cover the games mentioned that he works on it with coaches before games. It shows on film, as Leonard does seem to have a go-to move and a counter move at his disposal already, which is more than some of the NBA's traditional big men have.

Kawhi's favorite move on the post is to use his length to shoot over smaller or weaker defenders.

Here he is posting up Mike Miller during the finals. He establishes position looking to exploit a possible fronting. 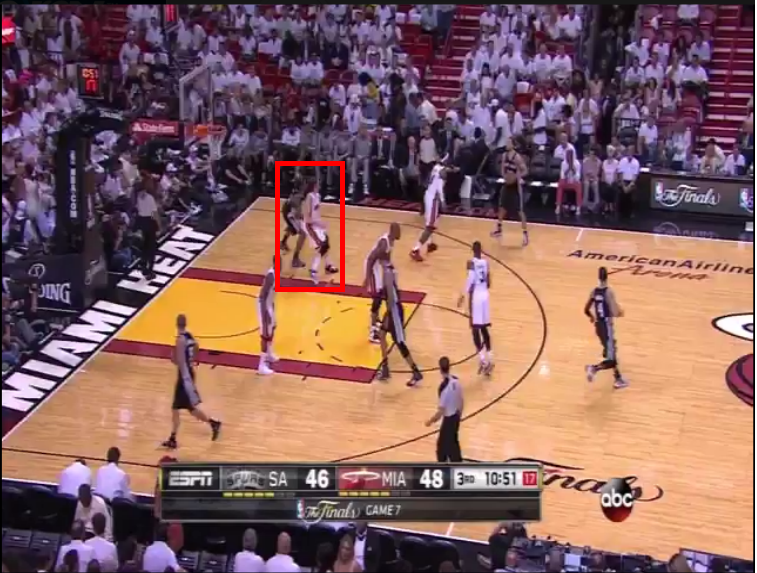 He backs him down by lowering his center of gravity. Help is looming in case he wants to take a power dribble and go to the rim. 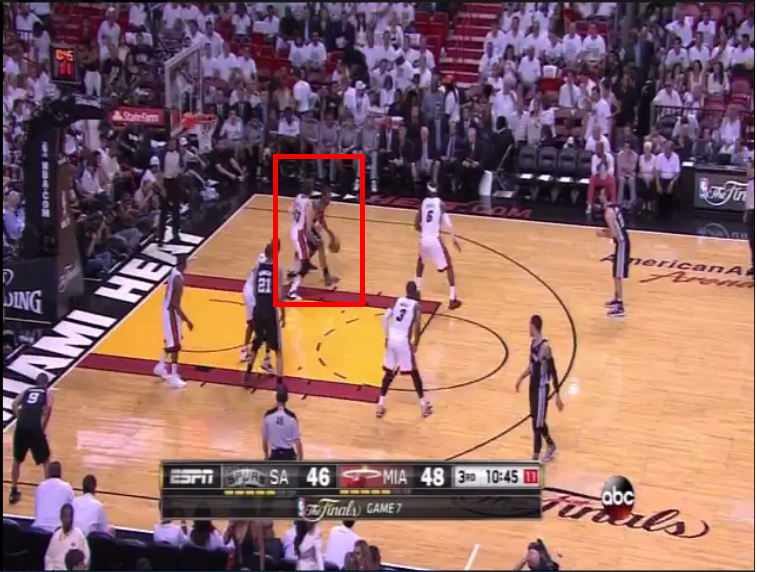 He creates space using his shoulder and pulls up. His length allows him to simply shoot over the defender. 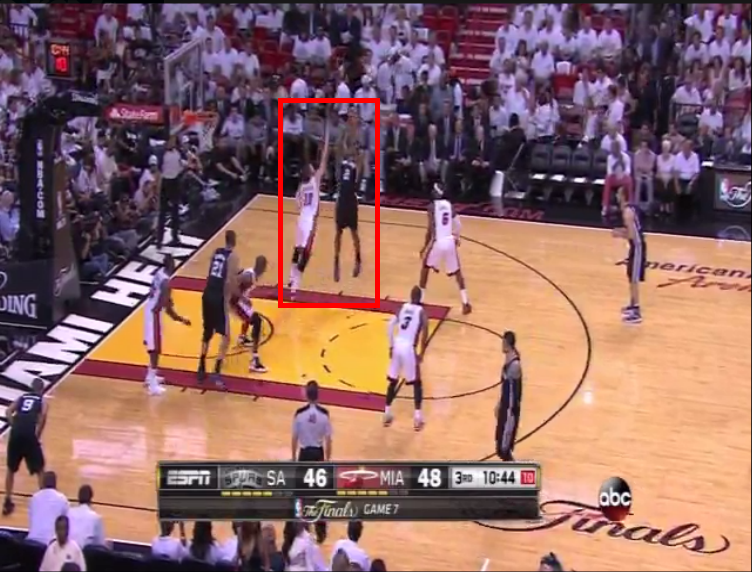 There are very few players that can contest a shot that high, and Leonard knows it. He is a very good mid-range shooter and makes it work to his advantage in those situations. Kawhi seems to prefer going over his left shoulder and into his right arm, but he can shoot turning the other way as well.

His counter move is to go to a hook shot, as seen here. Leonard has Kyle Singler on him as he catches the ball in the right block with the clock winding down. 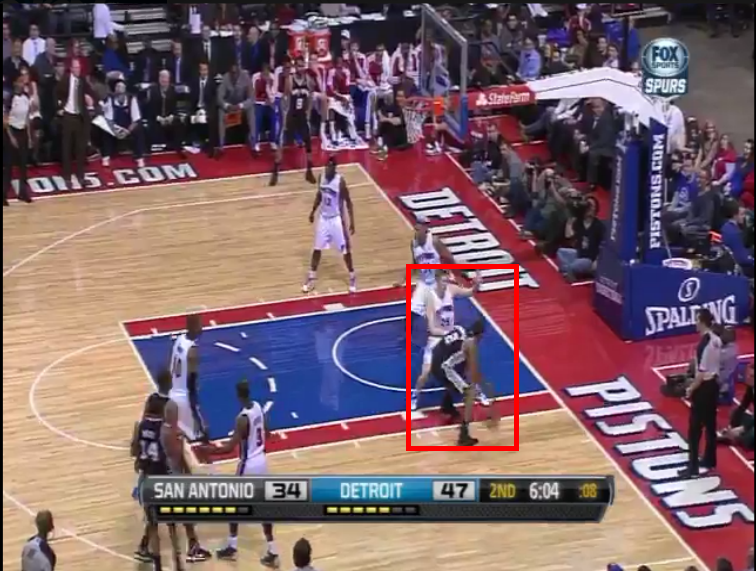 Greg Monroe recognizes that the shot clock is expiring and, knowing Boris Diaw is not a threat from outside, is ready to help. 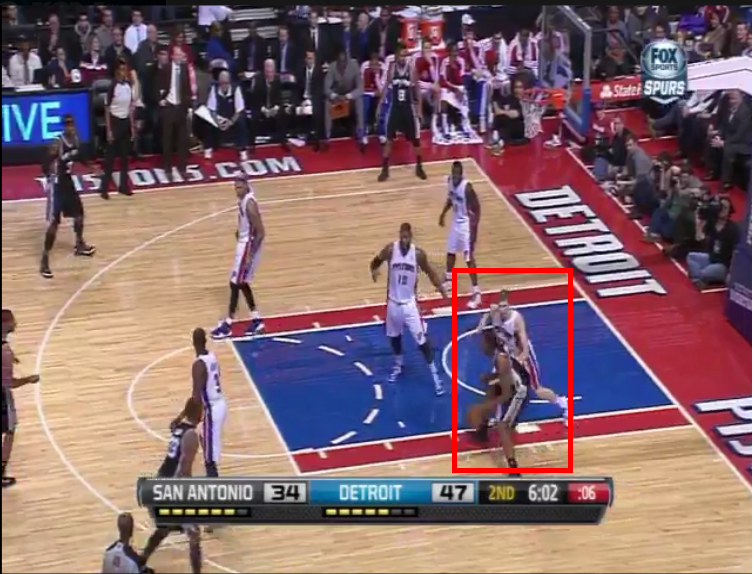 Leonard sees the possible double team coming and spins baseline, where he scores on a righty hook. 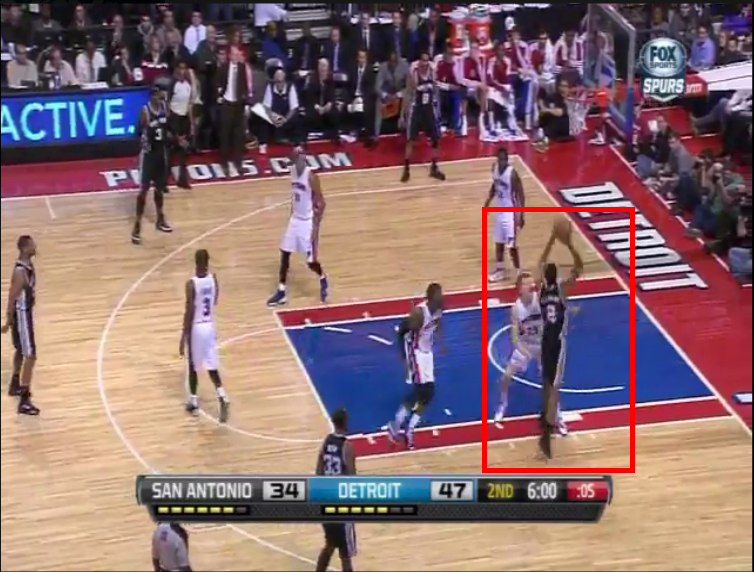 Leonard seems to be a skilled post player, but that alone won't cut it. He also needs to understand which of his weapons to use to prevent a defense from contesting him effectively. The good news is he is advanced in that area as well.

As an example, let's take a look at this sequence from a game against the Hornets. Here Xavier Henry picked Leonard up in transition. 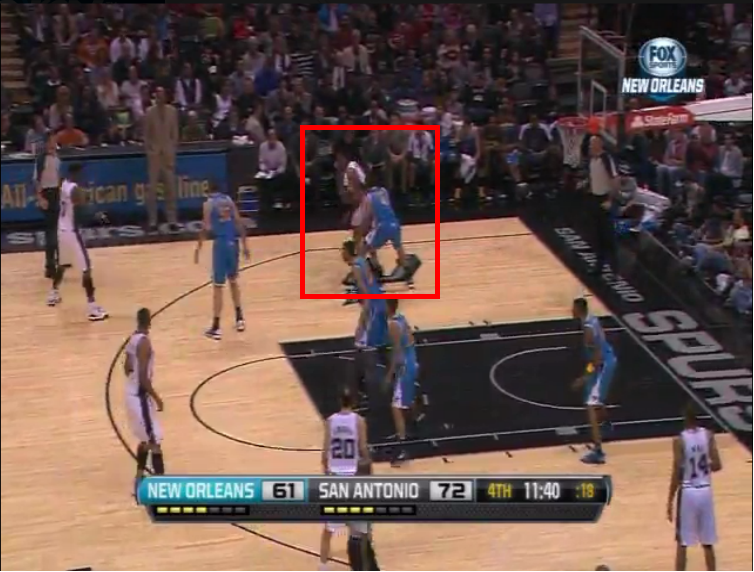 He spins baseline to his left hand, but he doesn't really have a lefty hook shot. Leonard's man is also taking away his lane to the basket. 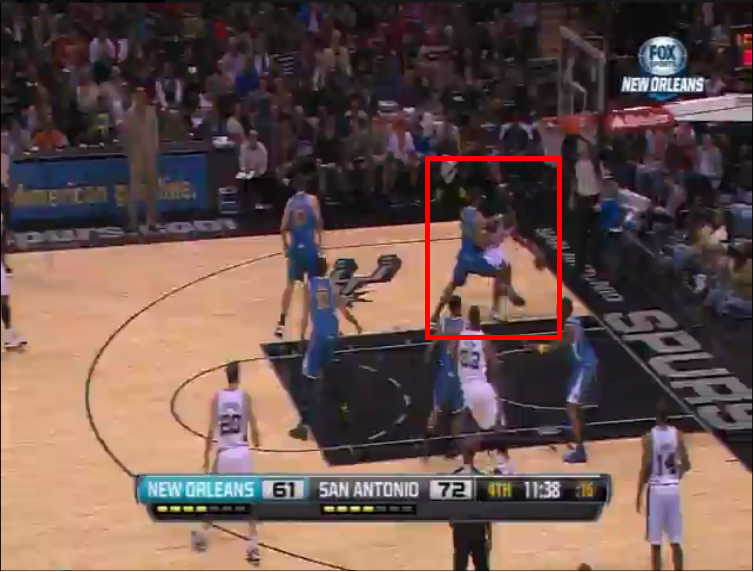 Instead of trying to force up a shot as the defense is sinking to contest, he simply spins back to his right hand for the hook. His solid ball handling and patience helps him immensely where other players might turn it over or get blocked from this angle. 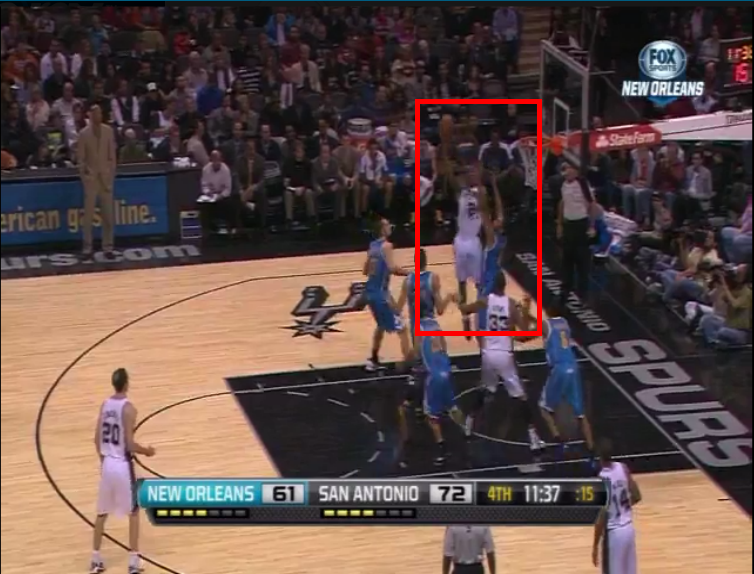 Similarly, Leonard seems to make the right decision as to where to go and which shot to take. Look at this two post ups against the Lakers, in which he figures out where Dwight Howard is and what he needs to do to prevent him from providing help defense.

First, Dwight is too far away from the play to help. 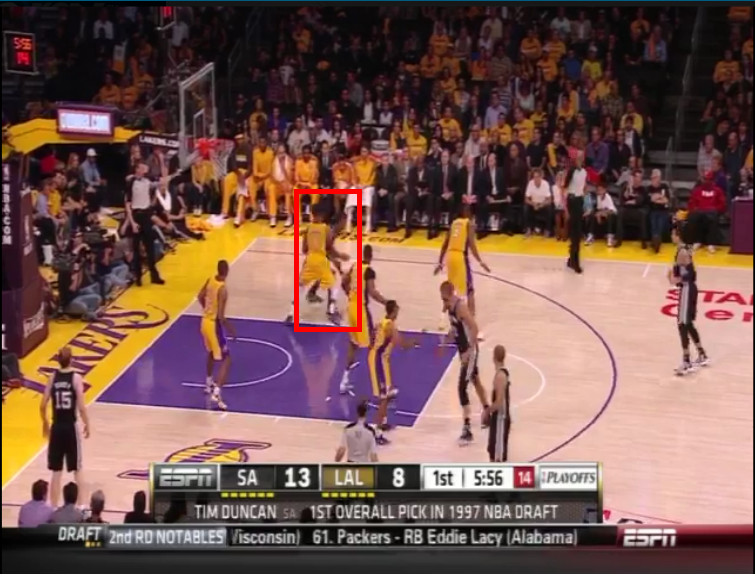 So, it's easy to go baseline for his hook. 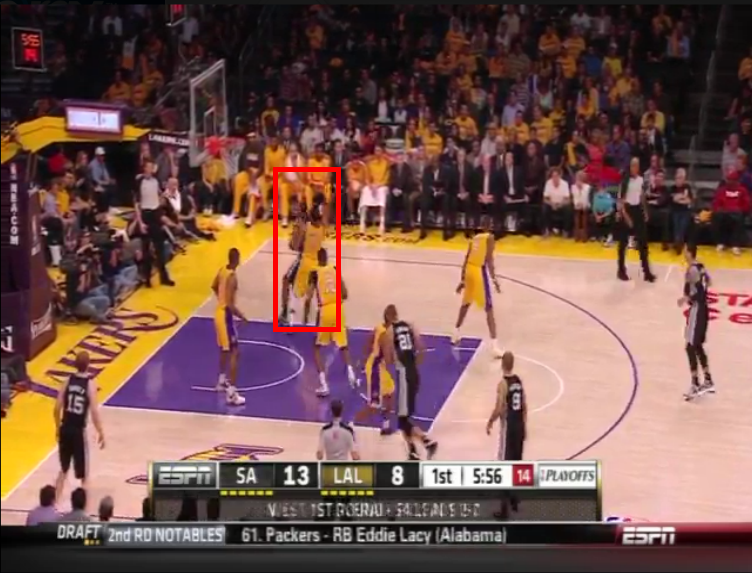 In this second instance, Howard is right there under the rim, ready to help on either a power move or a spin baseline. 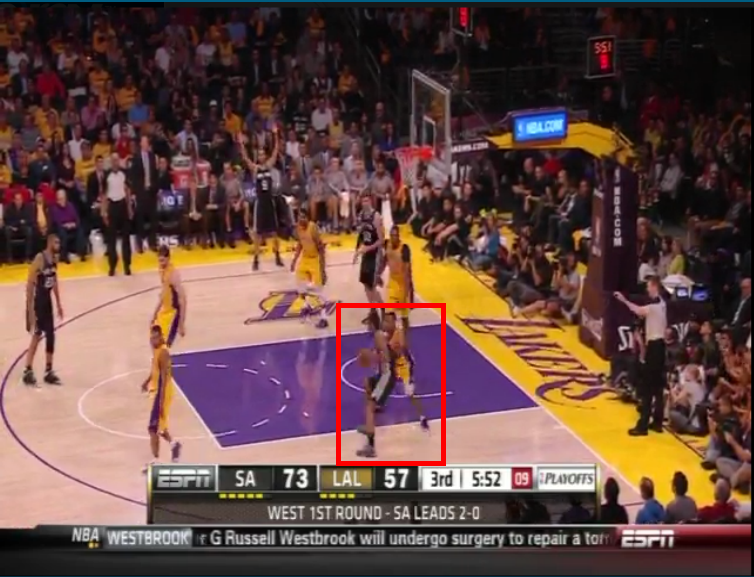 So, Leonard simply pulls up for the jumper. 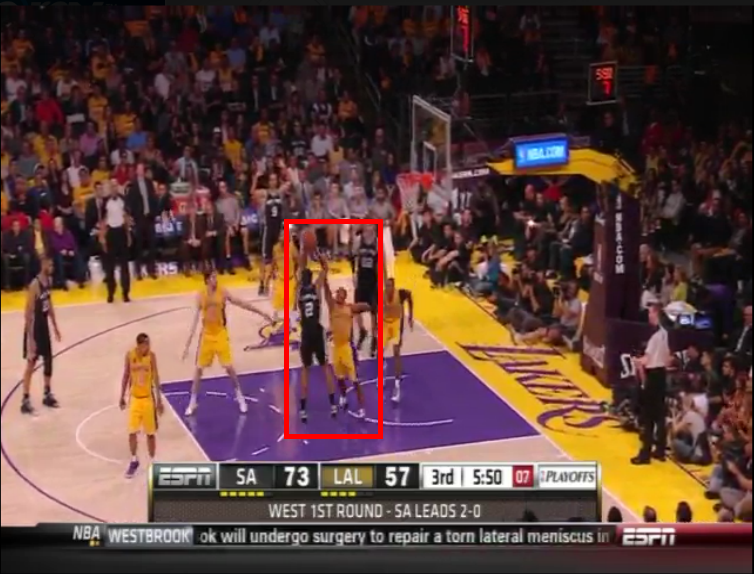 Leonard has both the skills and the BBIQ to work well in the post. He might not be the best passer out of the block yet, but that seems to be an easier skill to acquire than the type of court vision needed to operate out of pick and rolls. And posting up could result in more trips to the line, which is an area in which Kawhi needs all the help he can get.

This post is not only about Leonard individual development, however. Having him on the block can also help the team.

One of the reasons it would be fantastic if Leonard becomes a reliable threat in the post, is that it would make it that much harder for the opponents to cross-match on defense. Of the 29 post-up field goals Leonard attempted according to MySynergySports, 13 came in the playoffs. Specifically, most of them came when opponents tried to switch their best wing defender to Tony Parker. This sets up Kawhi for a perfect post up opportunity against what should be a smaller defender who's expecting only guard Leonard spotting up. Even if teams start respecting Leonard's post-up ability and keep a big defender on him, the Spurs can force the switch on 1-3 pick and rolls.

Additionally, Leonard becoming a prolific post-up threat would make up for the lack of a second elite post-up big man. Jeff Ayres and Tiago Splitter can post up on occasion, but they both work better on pick and roll plays and depend on establishing position early. If Kawhi proves capable of scoring consistently on the block, he could ostensibly be the Spurs' main post threat when Tim Duncan rests. And when the two play together, don't be surprised if the Spurs switch things up and try posting up Leonard with Duncan on the high post or the wing, ready to receive the kick-out pass.

The only downside to posting Leonard that I can think of, is that it will likely slow the pace of the game down a bit, but the benefits outweigh the negatives in my eyes. By going with post-ups instead of forcing Leonard to step out of his comfort zone and initiate the offense off the dribble, the Spurs could save themselves in the short term from the growing pains Leonard will likely go through at some point down the road, while simultaneously freeing Ginobili and Marco Belinelli to do what they do best. Maybe Leonard should ask Diaw for some diet tips to expand his derriere as well as his low-post moves and to give him a wider base and some extra cushion to bang with guys down low.