Manu discusses how he felt after the finals, why he hated the Hill-for-Leonard trade at the time and his relationship with Tim and Tony.

The rumors of Ginobili's demise were greatly exaggerated 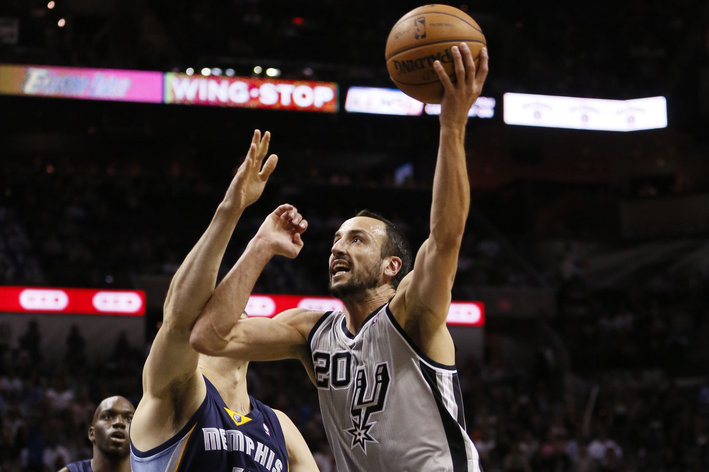 After a poor performance in last year's playoffs, many considered the days of Manu Ginobili as an impact player to be over. But his performance against the Grizzlies seems to suggest they might be wrong, after all.

What follows is a translation of an interview with Manu from Argentine sports newspaper Olé.

Do you feel indebted to someone, considering the way the season ended?

I don't know if indebted is the right word. I do feel disappointed for having done less than I thought I was able to do. It was an all-around rough season and I don't think I was at my best. You could say I'm indebted to my teammates because of that, perhaps. But not to the franchise. I'm back because they wanted me back and I wanted to come back.

Popovich said he re-watched the finals everyday until the start of preseason. Did you re-watch any of the games?

No. I haven't watched them and I never will. It would hurt me to do it.

What surprised you the most: the immediate support from the fans, the criticism you got from people that would not have touched you in the past or the franchise's gesture of resigning you without a second thought?

I wasn't even aware of how the fans felt. They had an ovation for me after game five because it had been my best game of the year and it was the finals. It's hard to know for certain how the fans feel. I'm aware they never booed me. Not when I was playing poorly, not when I was constantly hurt. And I really value that. As for the front office's support, yes, it made me feel good; I won't deny that. I kind of knew they wanted me back but I needed it to hear it.

Have you gone a little soft with age?

(Thinks) I wouldn't say it has to do with age. I had never felt vulnerable before and it happened last season. I had no reason to hide that. I'm not less of a man for expressing a specific feeling. I felt weak, period. I'm not a coward because of that. If I feel that way again, I'll express it.

You've never felt that way before?

Not in the playoffs.

But you did mention that you had had a rough time in 2003 because of all the exposure. That's a form of vulnerability

Yes, that's true. But I could separate what was going on outside the court from what was going on inside it. I would want to murder anyone who asked me for a photo or I would have practices in which I couldn't stand the coach or one of my teammates. But when the ball was in the air, I felt like I could take on the entire world, just like I always had. This time, that didn't happen.

How do you manage to hide your ego?

Competing against your teammates is crazy. It's inconceivable. -Manu

I have an ego. I have great self-esteem. In fact, I consider myself a very important part of this franchise and the national team. But that's as far as it goes. I don't experience it like other people, perhaps. I don't know -- if I were to sense that Pop didn't respect me or the franchise didn't care for me, then that would affect me. But I don't feel that way. Maybe that's strange for people on the outside to understand, because I come off the bench and don't complain about it or because when they bring in someone new like Marco (Belinelli) I try to do whatever I can to help them settle in. But I see that as part of my job. Competing against your teammates is crazy. It's inconceivable.

You must have competed for a spot at one time...

No. And maybe if it's for a job I can understand it. That never happened to me. And now I'm past that. Except from my first time with the national team, I never had to fight for minutes. I'll go further: when I first got to Kinder Bologna, I was actually happy to play next to (star Serbian shooting guard Predrag) Danilovic. And when (Michael) Finley, who at the time was an elite player, joined us. I always felt that sooner or later I would end up playing. I always believed in myself. That's probably where my self-esteem shows the best.

Does defeat hurt after so many triumphs?

if the opponent plays better than you do, what are you going to do? It's not like somebody died. -Manu

Let's put that myth to bed: I've lost much more than I've won during my career. I've won a lot; that's true. When you average it out, I come out on top. But I can assure you I experienced plenty of defeat. Some very tough ones, too. I have experienced a surprising amount of losses just like the one against Miami in game six. At least four: World Championship finals, World Championship semifinals, under 21 World Finals and Fisher's shot. And it pisses me off. But I'm learning to live with it. You win some, you lose some. In this particular case, I won't deny it: it was a gut punch. Because we had the candy and it was taken away from us. That hurts more. But if the opponent plays better than you do, what are you going to do? It's not like somebody died.

If you could change the outcome of one game from your career, which would it be?

(Thinks) The final game in Indianapolis (World Championship) and game six against Miami. At the time it happened, losing the Euroleague final against Panathinaikos destroyed me. We were up 13 and had it in the bag. And ended up losing. But I would choose those two games.

Your leadership is really perceived better here at practice. Do you enjoy that aspect?

I do. I've noticed a drastic change since 2005. And I liked it. We were starting to get taken into consideration , Pop would talk to us three and asked us how to resolve a situation. I went all in, then. And it continued to evolve ever since. Back in the day, I wasn't as much of a vocal leader as I am today. Because I was younger, because we had renowned veterans and because my English wasn't as good. When your heart is racing, in the heat of the moment, it's hard to speak a language other than your own. It's all more natural for me now.

Were you surprised by (Kawhi) Leonard?

When [Kawhi] arrived, I was very angry because I liked playing with George Hill. -Manu

When he arrived, I was very angry because I liked playing with George Hill. I was upset that he was traded for a rookie. But I didn't really know him. In his first year, and despite the lockout, he showed things, you could see his potential. But in the second part of last season his performance was crazy -- to really stand and applaud. The dude just balls, he deserves to have the rock in his hands and he earned our respect. If you ask him, even Pop will tell you he was surprised by him.

After being together for so long, what do you talk about with Duncan and Parker?

I barely talk basketball with Tim and Tony; we mostly goof around. -Manu

I barely talk basketball with Tim and Tony; we mostly goof around. Timmy and I do get sentimental after a loss sometimes. But I don't really need to talk to them, that's how strong the bond is. I see Tony check in and I know how he is going to play. I know when it is OK to say something to Tim and when it's best to leave him alone. It's a level of familiarity that transcends speech. I mean, if Tim has a bad game, he doesn't need me to tell him anything. He will show up three hours earlier tomorrow to work on his shot and will kill it next time, like he always does. And if Tony has a bad game, I know that when someone from the coaching stuff gets to him about it, he will react positively, like he always does. We don't need to push each other that much.

At 36, is basketball a passion or a job?

It depends on the moment. For most of last season, it was a job. This month, on the other hand, I'm enjoying it fully. I feel healthy, happy, at ease. But up until June it was the worst, I wasn't enjoying basketball. It was the first time that happened to me in my career. I wanted to do well and I couldn't. So I sort of lost track of everything I love about the sport. I felt constricted, with my head going at a thousand miles an hour.