The Spurs took care of business in their season opener despite losing Tim Duncan to a chest contusion in the third quarter.

The Spurs started the season on the right foot, beating the always-tough Grizzlies at home 101-94. Unfortunately, Tim Duncan had to leave the game in the third quarter with a chest contusion, but the team pulled through and shut down the Grizzlies' attempt at a second-half comeback.

The Spurs started the game looking like they hadn't play together in a game that counted for a while. Tony Parker wasn't looking like his lightning-quick self and the Spurs offense was clearly hurting because of it. To make matters worse, the Grizzlies seemed to be making good on their off-season commitment to pushing the pace, and caught the Spurs defense dozing off on some transition opportunities. The bench unit looked a bit better than the starters but the Grizzlies held onto a 20-18 lead at the end of the first quarter, on the back of strong performances by Tayshaun Prince and Marc Gasol.

Then Patty Mills happened. Mills scored 10 second-quarter points on a perfect 3-3 from the three-point line and topped it off with a made free throw on a four-point play. Manu Ginobili orchestrated the offense beautifully with the help of Marco Belinelli and the defense improved dramatically, playing off the Grizzlies' shooters and packing the paint. It worked as well as it did in the conference finals and it allowed the Spurs to shut down the usually tepid Memphis offense, allowing only seven points in the period while scoring 30 of their own. At the break the Spurs had a surprisingly high 21-point lead.

The starters once again began sloppy and the Grizzlies went on a 4-0 mini run to start the third. To make matters worse, this happened: 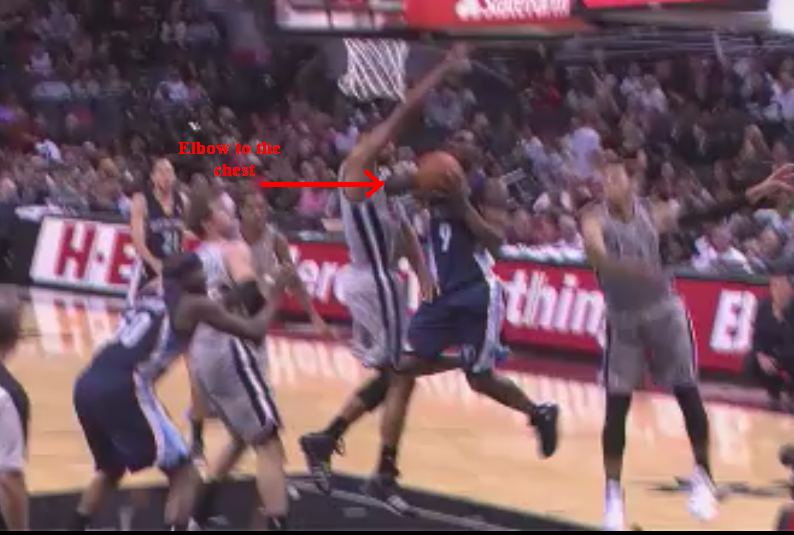 Tim Duncan left the game with a chest contusion and didn't come back. Fortunately, Tiago Splitter and Manu Ginobili were there to pick up the slack, scoring a combined 10 points in the third quarter. But the momentum shifted and the Grizzlies bench, which was largely ineffective in the first half, managed to chip off at the lead on sheer effort. Going into the fourth, they were down only 14 after trailing by as much as 21.

By now everyone knows that the grit-and-grind Grizzlies don't give up, they don't quit. So of course they tightened up on defense and took advantage of some lapses by the Spurs on their own end to reduce the lead to just five. Consecutive three-pointers by Parker and Green with a little over six minutes to go weren't enough to deter the late run from Memphis. Fortunately, the Spurs have Kawhi Leonard and a healthy Manu this season.

Up eight after a Diaw layup, Leonard stole the ball and hit a breakaway layup over Mike Miller with 3:29 to go. The Grizzlies called for a timeout but couldn't score off it, and Ginobili attacked the still-not-set defense on the secondary break after the miss for a vintage lefty layup. Gasol cut the deficit back to 12 but Leonard hit a three to stretch it to 13 with only 2:19 to go. After that, the game was decided and the bench closed it out.

The Spurs won their first game of the season against a contender and looked good doing it, for the most part. That's all anyone can ask this early in the season.

Basketball is back, Pounders, and the Spurs started out great, so rejoice! There is no news on Duncan yet so all we can do is be optimistic he will be ready to go on Friday against the Lakers in LA.