After a fantastic season that ended on a sour note, it's time to focus on what the future holds for the still-contending Spurs.

It's PtR's turn to preview our Spurs for the ongoing SBNation's NBA season previews. That means opening night is almost here, you guys!

1. What significant moves were made during the off-season? 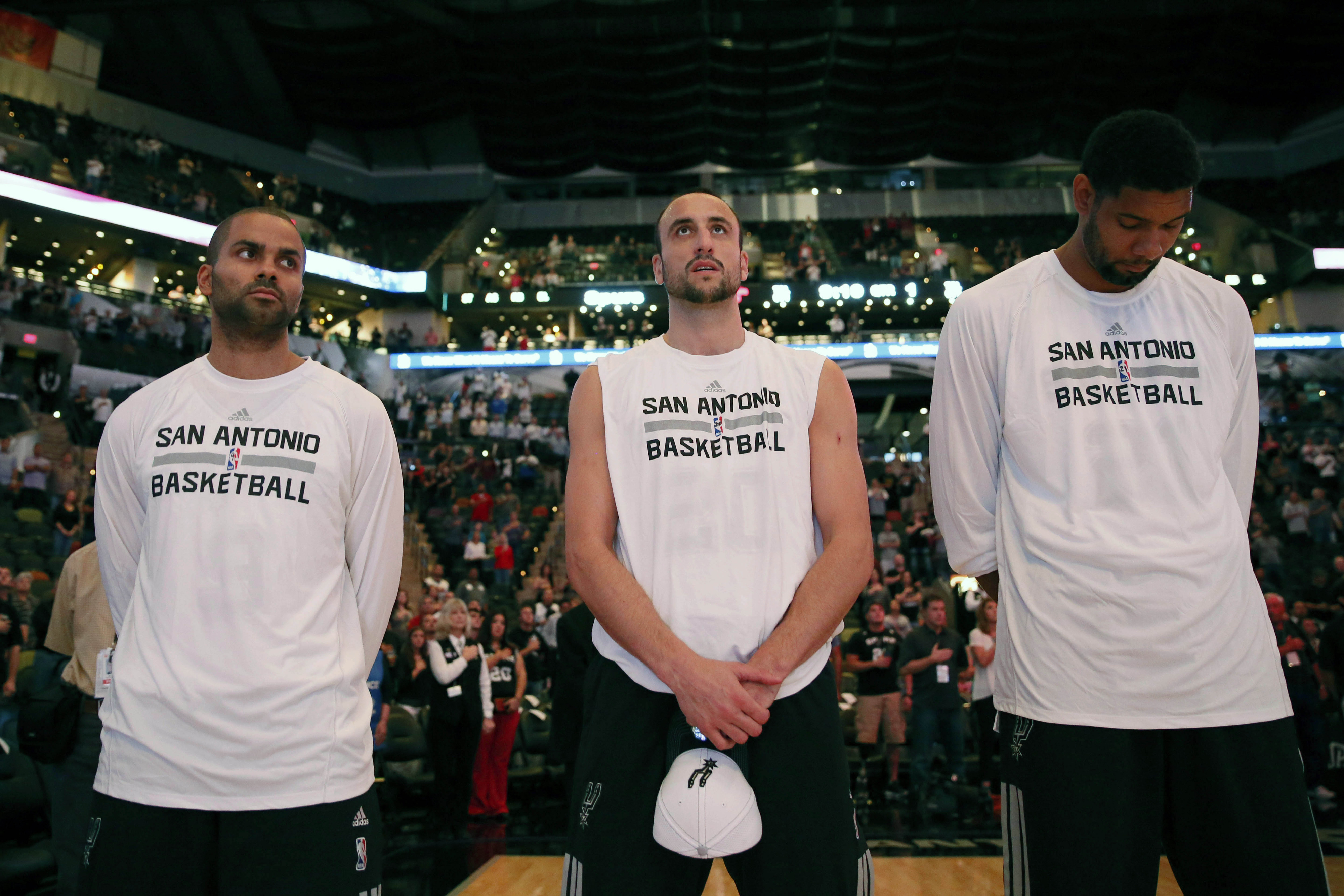 After coming as close to winning a title as a team can get without actually hoisting the trophy , the Spurs predictably opted for continuity. Instead of renouncing Manu Ginobili and Tiago Splitter and swinging for the fences by trying to get a marquee free agent, the Spurs re-signed the two South Americans to hefty contracts to give it one more two-year shot with the existing core.

Two players that have been mainstays of the rotation over the past few years became free agents and the Spurs did very little to try and retain them. Gary Neal and DeJuan Blair will be fondly remembered, but it was becoming painfully obvious that their physical limitations were too significant to overcome on the defensive end. So the Spurs replaced them with similar players that fit their vision better in Marco Belinelli and Jeff Ayres.

Belinelli seems to be the perfect complement for a bench unit that struggled with shot creation and scoring. Coming off a season with Tom Thibodeau in Chicago, his defense is not as suspect as it was earlier in his career, and his ability to play both on and off the ball could make him a key component of the Spurs rotation. Ayres (formerly known as Pendergraph) is more of an unknown but the early signs are encouraging. At the very least, he brings something the Spurs have been lacking from a reserve big since Antonio McDyess retired: a mid-range jumper. Ayres will battle Matt Bonner and Aron Baynes for minutes but I wouldn't be surprised if he has cemented his place in the rotation by Christmas.

2. What are the team's biggest strengths?

Cohesiveness and execution on both sides of the ball

The Spurs have always valued chemistry and execution as highly as any team, but recently they've struggled finding the right pieces to fully carry out Gregg Popovich's vision. Over the last couple of years the Spurs have experienced a fair amount of roster turnover as they transitioned from the old days of Tim Duncan's dominance into a more perimeter-oriented, well-balanced team. It seems this season they will finally have the right pieces to unlock their full potential.

Defensively, the Spurs have undergone a renaissance

The starting lineup was fantastic last season and is expected to get even better. Duncan and Parker are the focal point on offense for the starters, with Splitter setting screens and Kawhi Leonard and Danny Green spacing the floor. Everyone knows where to be and what to do, which results in a beautiful motion offense filled with crisp ball movement. There has traditionally been more room for improvisation when Manu Ginobili comes in with the bench but in past years the personnel were just not suited to Manu's skills. That shouldn't be a problem this season with the departures of the erratic Neal and Jackson and the addition of the more compatible and versatile Marco Belinelli and Jeff Ayres.

Defensively, the Spurs have undergone a renaissance thanks to Kawhi Leonard's emergence as a defensive stopper as well as Danny Green's and Tiago Splitter's fundamentally sound, team-oriented performances. Splitter's presence has allowed Duncan to hang back to protect the rim, which resulted in Big Fun posting a career year as a shot-blocker at age 36. Danny Green occasionally slides down to defend point guards, which frees up Parker to rest on defense. Ginobili remains a terror as a help defender and Kawhi Leonard has joined him as the other designated ball hawk while the rest of the team rigorously sticks to the defensive game plan.

The result? It's very hard for opponents to catch the Spurs off-guard on defense or to force them away from their preferred sets on offense.

3. What are the team's biggest weaknesses?

Health and a lower potential peak than some other contenders

The Spurs need every one of their core players to be healthy in order to be a bona fide contender. That's a tricky proposition when your three biggest stars are over 30 and have a lot of miles on their legs. Manu Ginobili struggled with nagging injuries all through last season while Tony Parker wasn't the same after a postseason hamstring injury robbed him of his speed. I won't even mention Tim Kness, because I get scared just thinking about him, or the fact that Kawhi Leonard battled tendinitis at age 21.

But every team needs to be wary of injuries. The problem for the Spurs is that even if they remain healthy, there's the chance it won't be enough. Other contenders seem to have a higher ceiling by virtue of being younger and -- at least on paper -- more potential-laden. Who knows how good Kevin Durant will be next season? Can Blake Griffin and Deandre Jordan finally figure out team defense? It's unlikely to happen, but if Greg Oden can approximate in Miami the level he showed with the Blazers when healthy, it's game over for the rest of the league. If everything clicks into place - including some trade-deadline deals - the Pacers, Warriors and Rockets might just be too talented and athletic for the Spurs to handle.

More: All of SB Nation's NBA previews to date

The Spurs are more likely to be the best version of themselves compared to other contenders because of continuity. But their reliance on useful but limited role players with not much upside - as well as veteran starters that can't stay on the court as long - could be risky against teams that might have less dependable but more naturally talented supporting casts.

4. What are the goals for the team?

The Spurs were good enough to win it last season but a few unlucky bounces and some mental mistakes prevented them from hanging up their fifth banner. With Tim Duncan and Manu Ginobili rapidly approaching the end of their careers, the Spurs are in win-now mode and anything short of a Finals appearance will feel like a failure.

5. Will Kawhi Leonard take the next step on his development?

Leonard surprised from the get-go, developing an outside shot seemingly out of nowhere during his rookie season to effectively quiet the single biggest concern about his prospects as an NBA player. Once Richard Jefferson was traded, Kawhi settled in as the starting small forward and showed that he was more than just an elite role player. This is the year Leonard could become a two-way force unlike any the Spurs have enjoyed at small forward in the Duncan era. Even the usually conservative Pop seems committed to expanding Leonard's offensive role this upcoming season. The question is: What exactly will that look like?

Leonard has not had the ball in his hands much in his young career, and when he has, he's had a hard time creating efficient looks, often settling for mid-range jumpers. The Spurs could ostensibly attempt to get him involved on some simple pick-and-roll actions, like Zach Lowe suggests, or could try using him in the post or as a screener on 1-3 pick-and-rolls. Regardless of the path they choose, it will all be experimental at this point. San Antonio has relied almost exclusively on the Big Three to create on offense for so long that any deviation from that seems hard to fathom.

Leonard will be a key player even in a reduced offensive role thanks to his phenomenal defense and rebounding. But if he can make a successful transition into an offensive force, that could vault the Spurs right to the top of the heap of contenders.

The Spurs take advantage of the uncertainties surrounding the West's top teams to get the first seed. From there, anything can happen.