Maggette will retire if the Spurs don't sign him

Corey Maggette has said that his days of playing in the NBA are over if he doesn't make the final roster cut with the Spurs.

The San Antonio Express-News' Jeff McDonald tweeted that Corey Maggette expects to call it quits from his NBA career if he doesn't make the Spurs roster. 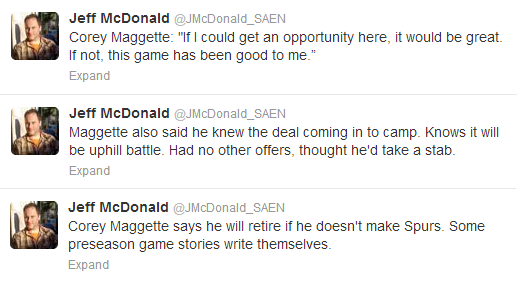 Maggette's words seem neither frustrated nor bitter, but merely those of a veteran who might not be up for spending the next few years grinding it out against younger players for a minimum contract.

Maggette started in Sunday's preseason game against the Phoenix Suns. He played a team-high 27 minutes on his way to scoring 10 points -- including a very Maggette-like 8-8 from the free throw line -- before fouling out. After the game, Pop had this to say about his play:

"(Maggette) looks like he's caught on to what we're trying to do," Popovich said. "He's an intelligent player. He's been in the league a while. He knows how to try to fit in and that's what he's trying to do with us. See if he can absorb enough to be a part of this team."

After waiving Sam Young, the Spurs roster sits at 19 players. The other guys battling for that 15th and final roster spot -- assuming the Spurs fill it -- are Myck Kabongo, Marcus Cousin, Dan Nwaele and Courtney Fells. Neither Kabongo nor Nwaele played against the Suns.

Did you catch the Suns game? What did you of Maggette in a Spurs uniform? What do you think of his chances to make the 15-man roster?