Spurs cheated out of title by PEDs: Performance Enhancing Disability

Share All sharing options for: Spurs cheated out of title by PEDs: Performance Enhancing Disability

Hey Pounders, this is your pal, Stampler, to talk to you about something very important. You might want to sit down for this. Again, this is super important.

I, like most of you, have been obsessed over the team's Finals loss to the Miami Heat this past June. I keep reliving the last few minutes of Game 6 over and over again. Heck, they were even close in Game 7, you know? So many chances. So many chances.

Until recently though, I thought it was fate that made the Spurs lose. A couple of bad bounces, some bad luck, and some terrible coaching decisions. I didn't think they were cheated by the referees or there was some awful conspiracy.

Now I think differently. Now instead of regret all I taste is bitterness, and no matter how much Listerine I gargle with, I just can't get it out of my mouth. I fear I'll take it to the grave.

When we think of "PEDs" -- performance-enhancing drugs --- we automatically think of baseball and sluggers like Barry Bonds, Alex Rodriguez, Mark McGwire, Sammy Sosa and Rafael Palmeiro. If not baseball, then the Tour de France where Lance Armstrong and all the other riders dope their blood. And if not those two sports, then football where just about everybody powders their Froot Loops with HGH.

Sadly, the PED epidemic seems to be spreading, and like baseball and cycling, I'm sorry to have to report that it's struck our beloved sport all the way at the top, with LeBron James, the consensus best player in the world, caught red-handed (or red-footed, I should say) with PEDs.

This is a different animal altogether. James isn't guilty of using performing-enhancing drugs. Rather, he's guilty of cheating by way of a performance-enhancing disability. WARNING: You might want to have an air-sickness bag near you, or perhaps a large bucket.

I present to you Exhibit A: 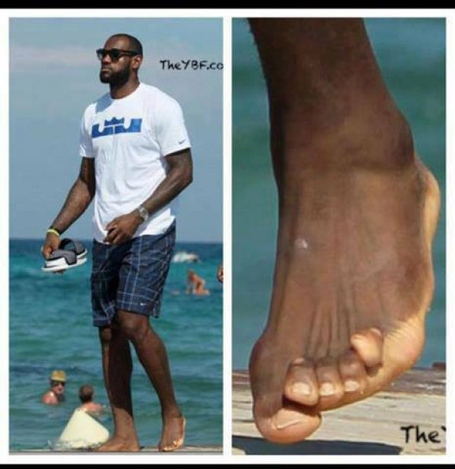 Obviously your first thought when you saw that was, "Gross." Hey, me too.

After though, if you're a lunatic like me, you think about the benefits of having such a freakish foot. I mean, look at that thing. It's basically impossible for James to suffer a foot injury. He can't have his piggies stepped on like you and I have to worry about whenever we hoop it up. Also, he seems to have an extra inch of sole on the bottom of his foot that looks like all rubberized muscle, no bone. What I'm trying to say is that LeBron's left foot, his jumping foot, is basically made of flubber.

Trust me, I've been in a lot of locker rooms in my day and have observed a lot of professional athletes. I'm not a fetishist or anything, but, as you might guess, professional athletic humans have feet that look just like yours or mine, albeit with some bruised, mangled up toes at times. James' foot though, is unlike any I've ever seen, with the sole in particular striking more peculiar than the toes. It just looks sproingy to me -- to use a technical term.

As far as I'm concerned, James physiology is cheating and all of his individual and team accomplishments in the NBA should be revoked and forfeited. The Spurs should be awarded the 2013 Larry O'Brien trophy and whoever won the West in 2012 (who can remember that far back?) should get that trophy.

I know what you're thinking: "Stampler, you're insensitive. You're an evil monster. You're PtR's version of Heisenberg."

Guilty on all counts, but this is still a load of bull.

I mean, if a man was born with 25-pound weights for hands we wouldn't let him become a professional boxer would we? He'd kill people with one punch. Here's a rendering. 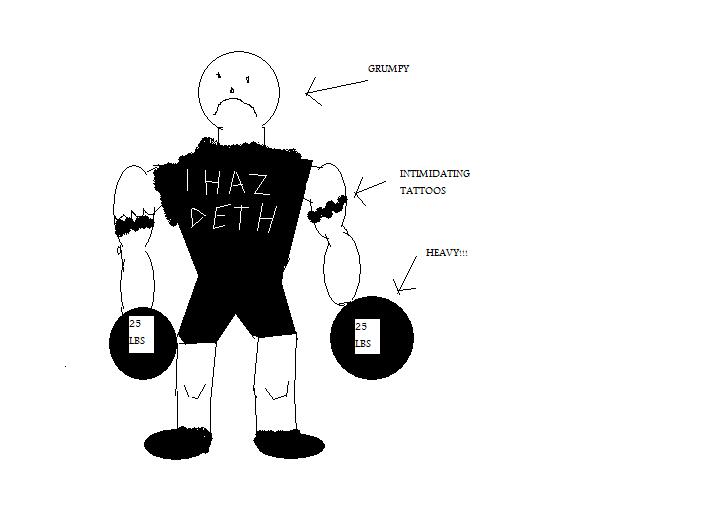 As you can see, those graphic design classes have really been paying off for me.

Would you let Mr. Heavy-hands here, grumpy from a lifetime of schoolyard torment, anywhere near a boxing ring? No, you would not. So why are we letting James merrily beast around the basketball court on his rubber feet? It makes no sense.

I say we start a petition and sort this thing out. Just please arrange yourselves in a calm, orderly, single-file line...