State of the Spurs: By the numbers

Which of the Spurs wings has the biggest impact on San Antonio's defense? Are the most used lineups the most productive? Who should shoot more and who should shoot less? And why is everybody talking about how great Tiago Splitter is this year? It's all in the numbers.

Share All sharing options for: State of the Spurs: By the numbers

Since the Spurs have had a couple of off days I thought I would dive into the NBA's stat site us media folk get access to and look at some numbers and see if there was anything interesting to report. I found some intriguing trends and some unexpected information. Nothing too mind-blowing, mind you, but curious, at least. I'm talking about things like...

When Ginobili is on the court the Spurs allow a team best 95.1 points per 100 possessions. When he's off, the Spurs allow 100.8. That's an over five point swing and it's mostly because of Green. With Danny on the court the Spurs allow 100.4 points and when he's off 96.2. Green spends more time than Manu guarding the other team's best perimeter player but that doesn't fully explain why Danny's defensive numbers have deteriorated. Last season the Spurs had a better defensive rating with Danny on instead of Manu but the trend has reversed. One thing to note is that the starting lineup with Green on has a stellar defensive rating (89.1) while the same four other guys with Manu struggle a bit more (94.4), even if they are still good. It's possible that Green is just a great fit with the starting lineup and not so much when surrounded by bench guys. Something to keep and eye on.

Two of the Spurs' most used five man units so far have negative net ratings. The Blair-Duncan-Neal-Green-Parker is the third most used lineup and has a -2.1 net rating on 105 minutes together. It's below average on defense, allowing 101.4 points per 100 possessions but the real flaw is, surprisingly, on offense. That lineup scored more than eight points per 100 possessions less than the team average. One would think that a lineup featuring Parker and Duncan, plus two solid shooters like Green and Neal and a good screen and roll guy like Blair would score better but that hasn't been the case.

The other lineup that ranks top five in minutes but has a negative net rating is Parker-Neal-Green-Duncan-Splitter. In 57 minutes together that lineup was just atrocious defensively, allowing 109.3 points per 100 possessions. Pop was forced to use these small forward-less lineups when Leonard and Jackson were injured but has since, understandably, gone away form them. It goes to show how important it is for the Spurs to have size on the wings . We all know Neal is not a good defender so I won't pile on him here, but it is worrisome that even when playing SG (the position where most of us want to see him) the most-used lineups featuring him perform poorly on the defensive end, even those with Duncan.

In over 600 less total minutes, Patty Mills has taken 33 more three pointers than BoBo. Stephen Jackson, he of the 28% three point shooting, has taken 105 three pointers, which is 56 more than Diaw. Even Tony Parker has taken more threes than Boris even though Diaw trails only Bonner in three-point shooting percentage. Of course a case could be made for Diaw having great shooting numbers because he's choosy with his shot selection and the fact that he takes 46% of his shots at the rim is obviously a good thing, but Diaw was supposed to have range and space the floor. He needs to start taking more threes so that teams don't play off of him. Sacrificing a little efficiency to keep opponents on their toes is better than having great shooting numbers while not helping the offense on a team level. Take those open threes, Boris.

Conversely, Jackson needs to either take less threes or start making them 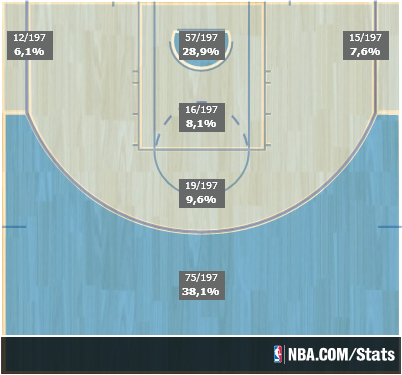 It looks great: he's taking shots from where he's supposed to. I lauded him before for forsaking the mid range jumper and focusing on three pointers and shots at the rim. Now here is his shot performance shot chart (his makes and misses) 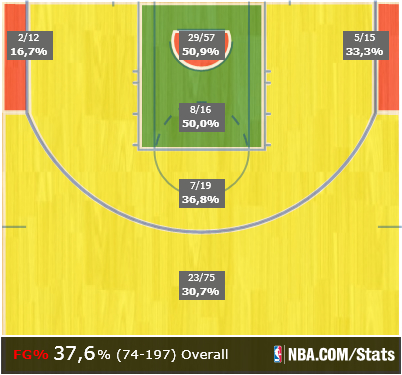 Ouch. Jack doesn't like the corners and is finishing at a low rate at the rim. It's no secret that Jackson is having a tough year scoring the ball and some of it can be excused by his finger injury, but he needs to get going fast, or he'll end up hurting the team. If an open shot is there he should absolutely take it but until he gets out of his funk he should try to take it easy and let the scoring come to him. Don't force shots from outside. If you are not open, move the ball. Some more post touches would be nice, as it earns him some trips to the line. The team needs Jackson to be at least a little more efficient.

Perceptions are deceiving: Splitter is playing about the same

The Most Improved Player award is kind of a sham. It usually goes to players that upped their raw stats by virtue of spending more time on the floor. That's what happening here with Splitter and his perceived improved play. Sure, Tiago's per game stats show him scoring more, rebounding better and getting to the line at a higher rate. He's improved in pretty much any conceivable per game metric, really. But he's also playing more. Looking at per 36 minutes numbers, he's basically the same player he was last year. You could even say he has regressed a little. He's playing with better teammates and doing a great job, don't get me wrong. But he hasn't taken a significant step forward with his game. He's still great on the pick and roll and a solid defender and that's all the Spurs need of him. But he's not all that different from what he was last season, except for a slight improvement in free throw shooting and turnovers. Tiago is having a great season and I'm happy with his performance but he also had a great season last year. Pop is just giving him more minutes now. 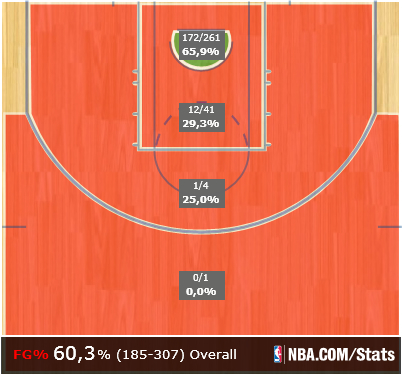 He's only taken five shots outside of the paint and one was a three pointer. Love you, Sparkles.