So much to check out before the game: Manu and Argentine amigo Luis Scola visiting, Tony's eye, the New Guy, the NBAFit warmup shirts,Tim's wardrobe - Let's take a look and then proceed to some game action:

They've been friends since playing together in their teen years on Argentina's FIBA teams. Manu came out and took a few half-hearted shots while waiting for his buddy, then they talked for a while before being joined by Tiago. Manu then took his regular warmup shots, the last player to finish (usually that's Matt Bonner). With the Spurs out of town the night before the game, they missed their traditional meal together. 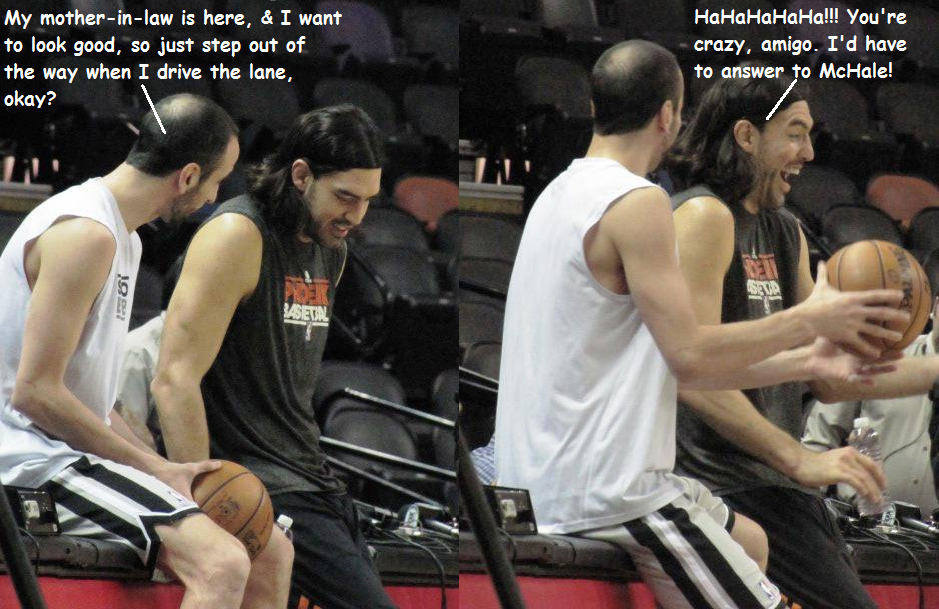 I really expected Tony's eye to look much worse:

It didn't matter that it was Australia Day. The only on-court action Aron Baynes saw was during warmups. I was told he was at the AT&T very early working alone on his shot before anyone except a few sports writers were admitted. He and Tony are wearing the NBAFit warmup shirts, which all teams are wearing this week. Gotta sell more merchandise! 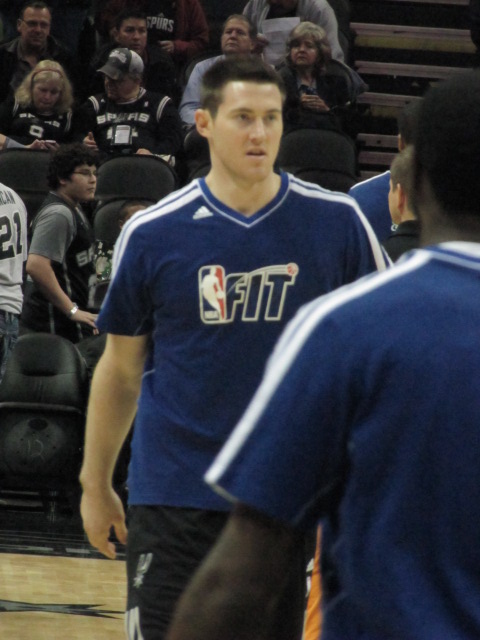 Sean Elliott jokes about Tim Duncan's wardrobe, but it's really beyond being funny - the only way I can figure a man who is 6'11" can get a pair of pants that are too long is to get them custom-tailored. Someone should shoot the tailor before the headline reads: "DUNCAN RE-INJURES KNEE WHILE TRIPPING ON PANTS LEG!" 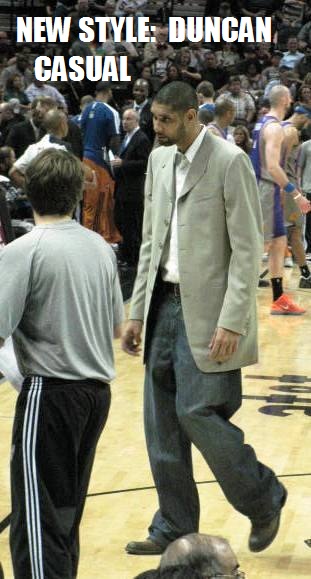 Injured Spurs always sit behind the bench when not in uniform, unless they are Tim Duncan. He sits where he pleases. With the addition of Baynes, this meant that someone was out a seat, and it was Patty Mills who lost the game of musical chairs. He sat on the floor near the bench. 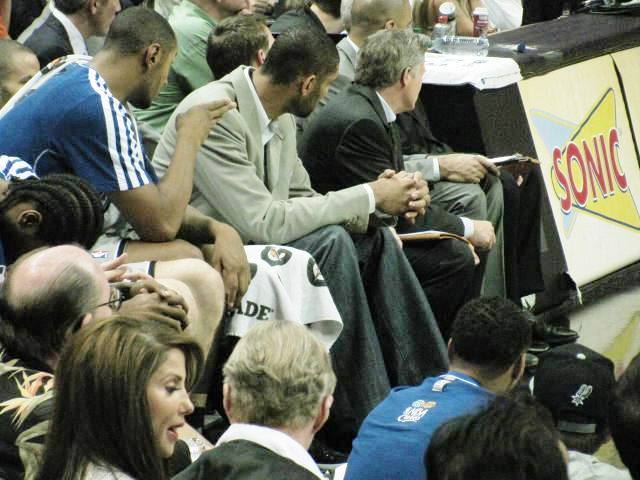 I was curious to see how Kawhi's knee had healed from the injury in Philadelphia. I could find no evidence of a cut, but Mike Monroe assured me he had seen his left knee "bleeding profusely." 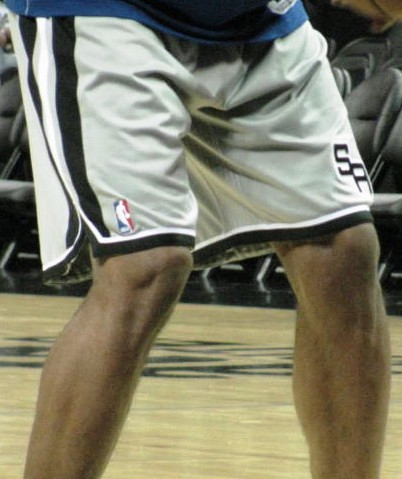 This is the Spurs 40th anniversary year, but some things are better forgotten: 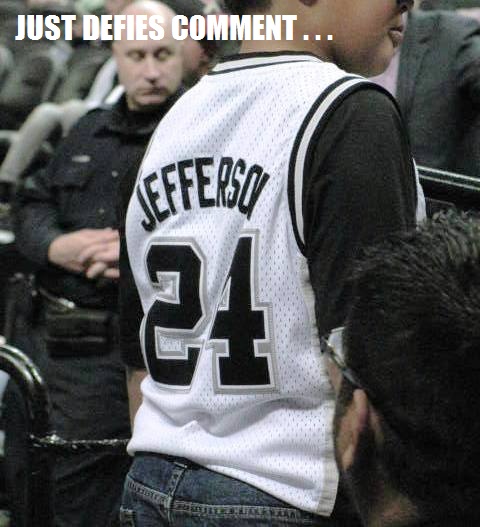 The coolest thing I saw before the game was this Hummer limo. It pulled up to the front entrance around 5:20 and out came running a dozen teenage girls, followed by one set of parents. It was a birthday party! 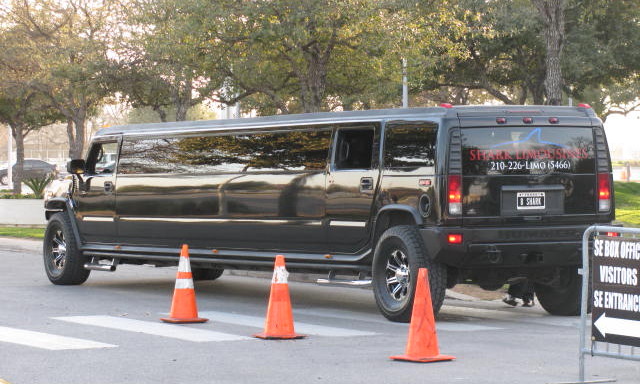 Enough pregame - you can read the recaps for the details and stats. Here's a few of my takes on the action.

Marcin Gortat and Tiago Splitter battled each other much of the game. In terms of looks, it was a basketball version of Beauty and the Beast. 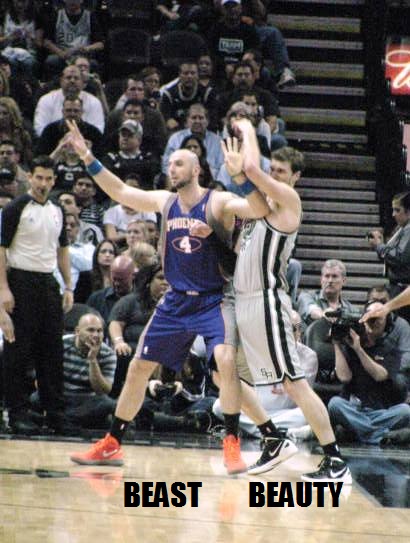 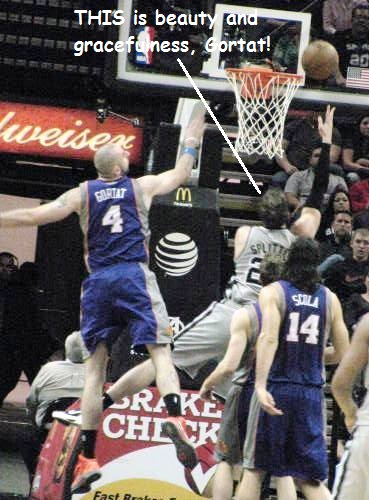 Michael Beasley and Kawhi Leonard had different takes on corn-rows - there's a clear winner here! Beasley should be thankful for Andrew Bynum's hairstyle - otherwise he would be more ridiculed. 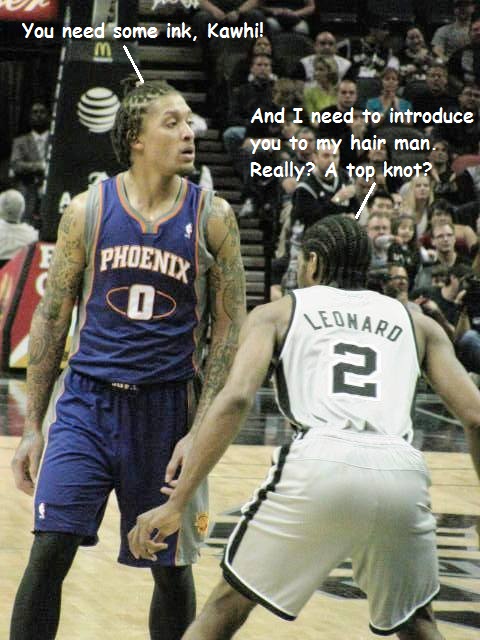 The biggest thing to happen in the game was Shannon Brown's flagrant 2 foul on Manu near the end of the third quarter. Manu's teammates were quick to be ready to defend him (Manu stared at Brown, got up, and walked away from the scrum). As Manu waited a few feet from the scorer's table, trying to get a glimpse of the replays and waiting for the refs' call, Stephen Jackson never left his side, just in case. 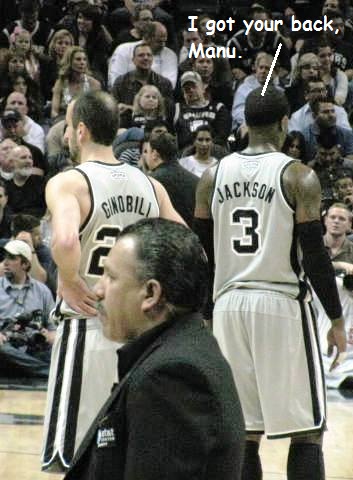 As Brown was escorted from the floor, Manu stood at the foul line and glared, with Zach Zarba nearby. Check out the fans' reaction as they wave goodbye. Brown had to walk down the tunnel between two lines of Silver Dancers waiting to take the floor between quarters, so he was waved out with a flourish of silver and black pompoms. Is that the Spurs version of being "drummed out" of the military? 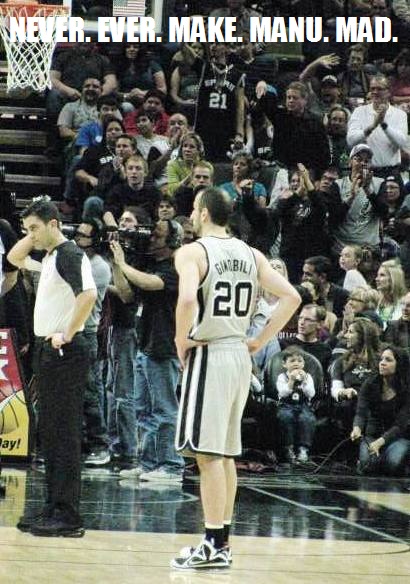 Of course, the fourth quarter belonged to The Closer - 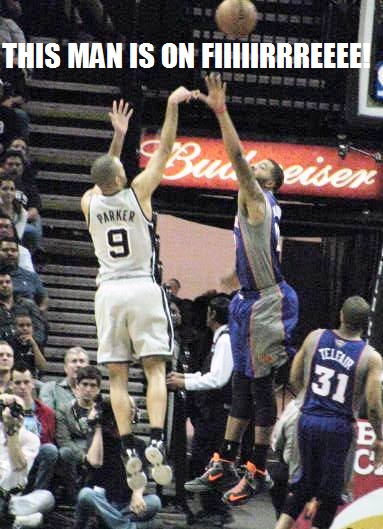 Post game, several Australians visited with Patty Mills. All, including Patty, were wearing their Straya Day t-shirts sold by Patty through Twitter for Australia Day. His girlfriend told me he has over $20,000 in sales in three days. Money goes to a children's home in Australia that Patty helps support. 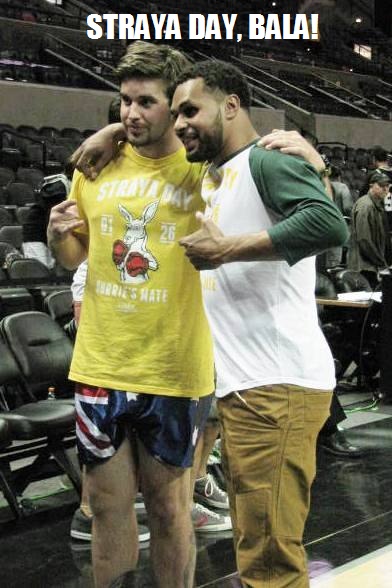