I have always been intrigued by the emotions Manu shows on his face, and how well he interacts with fans. With Big Kev, the former Spurs arena announcer doing the moderating, Manu spoke to several hundred season ticket holders after the Hornets game. Here's some of what he had to say when responding to various questions (not direct quotes because I was too busy taking pics to write down exactly what he said & I didn't have a recorder).

On retiring: he hopes to play "a couple of more years" - good news!

Where will he live after retiring? Initially he will return to Argentina to enjoy family and friends, but he will return to San Antonio often. He has built a relationship with the city in his eleven years here and will want to return.

Any thoughts of coaching? He referred to coaching as "craziness"

Who does he most like playng against in the NBA? Always enjoys playing against other Argentines (Scola, Prigioni, and Delfino). They enjoy dining out together and visiting, but when the ball is tipped, all friendship is put aside. Other than that, he likes playing against the best, and mentioned Kobe in particular as the player he most looked forward to playing against when he started in the NBA.

Are there any up and coming young players in Argentina? He said there were two young point guards (without naming them). He also pointed out that the fact that the Golden Generation has had such longevity may have hindered the development of new, young talent. It's been difficult to integrate new players into the team.

What are his best basketball memories? He spoke of winning championships in Italy and the Euroleague when he first started his career, and he thought nothing could top that. Then he came to the Spurs and won a championship in 2003, and thought that was the top, only to have it surpassed by winning two more. His favorite NBA memory was the 2005 championship. The very best memory was winning the Olympic gold in 2004, standing on the podium surrounded by his long-time teammates and hearing his country's anthem played - nothing tops that.

What music does he listen to? When he is in the car with his twins, it's whatever they want - Barney, Elmo, Disney. For just him, he doesn't listen so much to music as he does to talk shows. He can hear talk shows with news from Argentina via the internet and listens mostly to that.

What did he think of Tony's attempt to be a rapper? He laughed and said "Why do you have to put me on the spot like that?" before saying rap wasn't his type of music.

What junk food does he like to eat? Since at age 35 he has to compete against 22 year olds who are faster and in great shape, he does not eat junk food. He eats a lot of fish and pasta, and looked around to his wife Many across the arena and said she takes good care of him.

Will he encourage his twins to follow in his footsteps? He just wants them to find a career that will make them happy, no matter what it is.

He spent about 15 to 20 minutes with the fans while Many and the pajama-clad twins waited on the other side of the court. He was asked by one fan if we could meet his boys, and the Spurs quickly moved on to another question as Manu pretended not to understand the question. He was relaxed and honestly enjoyed the time spent, as did the many fans who stayed after the game.

It seems lately Sparkles has taken over as the resident "heart throb" of PTR, but here's a composite of photos I took of Manu during the post game chat with season ticket holders after the Hornets game. It seems proper that it be on a "Manu Ginobili-loving" site. 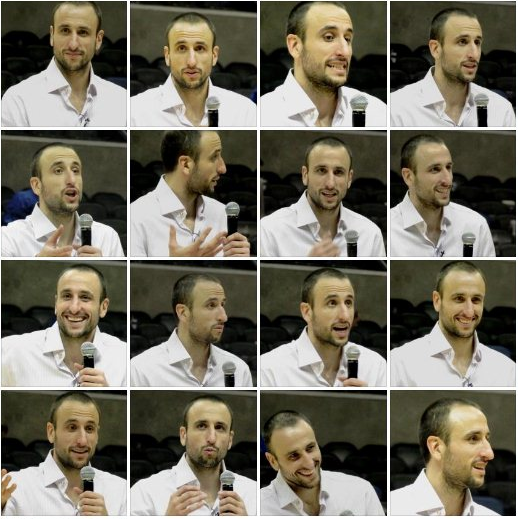