How I spent my Summer Vacation, Spurs Edition

What have the Spurs players been up to this off-season?

Share All sharing options for: How I spent my Summer Vacation, Spurs Edition

The off-season is a sad, sad time devoid of basketball. On the other hand, it does give us a chance to focus on things other than the NBA. It's the same for the players, who can use this time to pursue other interests or simply spend time with family and friends. So let's start checking in on what the Spurs have been up to, starting with the king of all things off-season, Stephen Jackson.

By now you've probably seen the awesomeness that is the video of Jackson eating ribs in slow motion, so I'll go with this following video as my Stephen Jackson moment of the off-season. In it, Jack is coaching the kids at his youth camp. That's a side of Jack we don't see too often.

Now that the niceness is out of the way, let's bring out the realness. As you all know, Stephen Jackson is the NBA's best rapper. He has an album dropping soon, and he's helping put together a collaborative hip hop mix tape featuring NBA players. That didn't stop him from calling Kevin Durant and Iman Shumpert (guys that are featured on Jack's solo album I might add) "wack" rappers in this radio interview. He also called Tony Parker's record "terrible". You ain't never lied, Jack. But seriously, you should watch the video. It's 12 minutes long, but worth it. Jackson opens up about the Malice in the Palace, the strip club shooting and his failed almost-wedding. That's as honest as anyone can get.

After Jack, things get more...traditional. Most of the international Spurs went back home after the Olympics, to spend time with families and friends. Manu got together with Alejandro Montechia and Pepe Sanchez to celebrate the anniversary of Team Argentina's first win over the US and spent some time chatting with Oscar-winning composer Gustavo Santaolalla. He's been quiet as of late but has assured us through his La Nacion column (in Spanish) that while he's been eating asados with friends, he will start working out soon. He also mentions that he won't play the World Cup qualifiers next summer, so that should ease Spurs' fans minds.

Boris Diaw and Tony Parker joined forces for a charity event. Diaw organized the event but Tony was the star, winning a watch for a little girl by hitting a half-court shot. Then Tony attended a Paris Saint Germain game and hung out with Victoria Azarenka, because that what Tony Parker do. On a serious note, he might scale back his involvement with his French team ASVEL because of an unresolved arena situation. Bummer.

Our other Frenchie, Nando De Colo is in Paris, enjoying the city and apparently working on finalizing his visa, which finally came through. Look how happy he looks there. He had a gym named after him, too, which is kind of cool.

Patty Mills really enjoyed his time with his family on his native Australia, if his twitter feed is to be believed. Now he has started "the grind". It's good that he recharged his batteries after an impressive performance in the Olympic Games, because this could be his breakout year. In the meantime, he and Cory Joseph volunteered at the San Antonio food bank. Good guys, those two.

Tiago Splitter went back to Brazil and did some interviews at the NBA 3X event. Our friends at Air Alamo translated one from Brazilian site Basketeria, where he raves about Tim Duncan and says he believes that "the team that is better on paper doesn't always win", referring to the Lakers, and that the Spurs are OKC's and the Lakers' equals. I like that fire, Tiago. You'll need it when Dwight tries to back you up in the post. He is back in San Antonio now where he'll join Timmeh to work out, if my Portuguese isn't failing me. Oh, and yes, female Pounders - he still is a very handsome young fella. 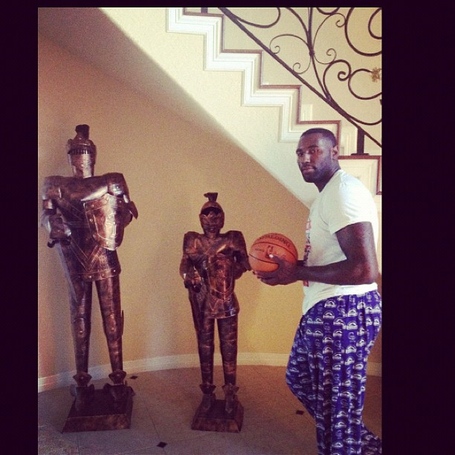 Why yes, that is DeJuan Blair, holding a ball in his pajamas next to two full sets of armor. "Why is he doing that?", you ask. "Why aren't we all?" is my answer. Never change, DeJuan.

Cory Joseph was back in his native Canada spending time with fellow national team players Tristan Thompson, Joel Anthony and others in Steve Nash's national team camp. Now he is in San Antonio working out with coach Chad Forcier and Kawhi Leonard. After his impressive turn in Summer League it's good to see Cory staying focused on basketball and in contact with the Spurs.

As for Kawhi, he hosted a basketball camp in San Diego in August and has kept a low profile ever since. He hasn't updated his twitter account in a while. I like to imagine he has been working on his game on a gym somewhere this whole time and will come back stronger for the upcoming season, taking home MIP. But maybe he was just chillin' with friends. I'm good either way.

Danny Green was in Russia as a Basketball Without Borders ambassador. Now he's back in San Antonio too and also joined Kawhi, Joseph and Coach Forcier for a workout. He is also very interested in raising awareness of the dangers of texting while driving, which is cool. Keep working, Danny. Earn that contract.

Gary Neal's been quiet as well. His twitter account is not updated regularly and in the last month Neal has shared a Jay-Z quote, the Jacob Riis quote and has said "what's up, bro" to T.J. Ford, Stephen Jackson and Danny Green. Make of that what you will.

Matt Bonner has been doing a ton of Spurs-sponsored fan outreach. Say what you want about Matty, but the guy is a team player.

That brings us to Tim Duncan, who has an uncharacteristic new hobby: drag racing. I know that we should all be freaking out like that time Tony was riding a motorized skate board (he's doing it again, BTW) but come on. It's Timmeh! Racing a car! That's pretty awesome as far as I'm concerned. It also makes you wonder what other stuff Timmeh's been hiding from us all this years...

So that pretty much sums up what the Spurs players have been up to this off-season. As entertaining as some of it was, I'm glad they are all starting to work out and get ready for the season. I can't wait. If I missed something our guys did, feel free to share it in the comments.