PtR's logo has changed. Here's the thought process behind it.

Share All sharing options for: The New Logo Explained

It's a new era for Pounding the Rock, as it is for every other blog that's a part of the SBNation family. As a result, this story (and the page in general) look very different than they did yesterday. And that can be a bit of a shock.

But the site also looks different than it will look in the days to come. Changes are still being made, and some of the things that kind of work now, will come to work quite well. If you aren't excited about the changes, please withhold your final judgment until the dust settles and everything takes a more final form. I appreciate your patience during this transition period.

That said, I would now like to discuss the new logo, which was unveiled last week and elicited far fewer cheers than jeers (although one notable criticism was retracted after this morning's launch.)

For the record (as well as for anyone who is new to our little corner of the interwebs) the name of our blog is taken from a quote by Jacob Riis that Coach Popovich uses as the guiding principle in coaching the San Antonio Spurs.

When nothing seems to help, I go and look at a stonecutter hammering away at his rock perhaps a hundred times without as much as a crack showing in it. Yet at the hundred and first blow it will split in two, and I know it was not that blow that did it, but all that had gone before.

To me, this quote means continual effort, and it means not being discouraged when effort seems to have achieved no result. It speaks to how overcoming obstacles is as much about the exertion of will as it is about the application of force. It isn't just the Stonecutter's Creedo, it's an inspirational call to persistence.

When I imagine Riis watching a stonecutter, I see the man bringing his mallet down as almost an act of faith. Faith that his tools will hold and that his labor is not in vain. Faith in his training and in his body's endurance. Faith that he can outlast his age-old opponent.

Why should faith come into it? Because for the vast majority of a stonecutter's time at work, he experiences almost no perceivable encouragement. Yet, in order to overcome, he must choose to persist. He must believe that he is having an impact, even though the rock shows no signs of ever splitting.

Below I've included a modern example of pounding the rock so you can see the effort it takes. Feel free to skip forward to the 1:20 mark of the video, or you can click here to be jumped directly to that moment on YouTube.

Usually when I read Riis' quote I think about the stonecutter, his determination, and how I can make that attitude my own. But today, for the first time ever, I found myself thinking of Riis, and why he went to watch the man swing away, over and over again. I think the words "when nothing seems to help" show that it's because Riis needed to remind himself that his work was having an effect, that regardless of whether he could see it or not, there were subtle changes taking place as a result of what he was doing. I can relate to both perspectives, and I find that I need each of them.

When I worked with the design firm who did all of the new logos for SBNation's blogs, I told them that the moment I wanted to depict in the logo was one of those hundred blows, not the hundred and first. We are in the middle of the process here. It's a rare event when we get to see a huge rock fall apart like it does in that video. When the stonecutter raises his tired arms in victory, it's as natural a response as can be. But it's only a moment in time before we move on to the next goal. For most of our lives, we're pounding the rock.

So, in the logo, I wanted to show the moment of impact -- to communicate the speed, the force and the effort involved. It's a very different logo from what we had before. As much as I liked the old fellow, I feel the new one is truer to the Riis quote. This isn't a bit of art we're tapping away at. We're bringing every ounce of energy we have to bear on what opposes us. That's the first impression I wanted to convey.

Another aspect to notice is that, because the process is ongoing, the cracks aren't complete; in fact, they've barely begun and don't reach out past the part of the rock we can see. Also, once it had been brought up, I couldn't resist the idea of making the design of the cracks roughly mimic the lines on a basketball. Yeah, not everyone sees that right off. Don't kick yourself if you didn't either. 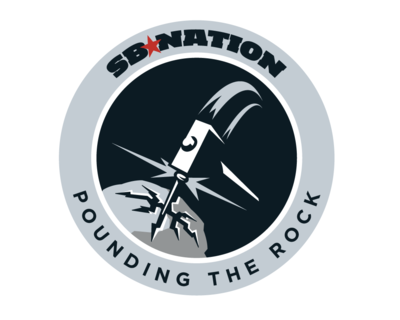 So, there it is. Our attempt at visualizing the philosophy of the team as chosen by the coach. Pop is constantly saying, "You don't win a game all at once, you win over a period of time." And one of the themes of our blog is that mindset of continuing to try, even in the absence of any evidence that what you're doing is having an effect -- trusting that we'll reach our goal by continuing, even when it appears that what you're doing isn't getting you anywhere.