Share All sharing options for: The DeJuan Blair Situation

Good ol' DeJuan Blair. I have a love/hate relationship (if you can call fandom a "relationship") with DeJuan. I was super-excited to see the Spurs get him and that continued into and through his rookie season. There was talk of him being the next steal of the draft for the Spurs organization and hopes were high. Since then, there seems to have been a drop in Blair's play. It could be that he doesn't like starting until the stretch run and then he ends up getting little-to-no burn late in the season and the playoffs, and that would be understandable. But the fact remains that Blair has not lived up to his rookie season in hardly any statistical category. When I say that, understand that I would expect any rookie to improve from year 1 to year 2. Blair has gotten marginally better in some areas of his game, but just marginally. Last season was no different. In fact, many thought, Blair included, that the Spurs would try to move the Pitt-product in the off-season.

That was not to be, at least to this point. Blair has one year remaining on his rookie deal and will then be a free-agent. So with that in mind, what should the Spurs do with Blair? Can he improve enough to have some trade value or enough for the Spurs to want to keep him as a part of their future? I'll share my thoughts on what to do with DaBeast.

First off, for those who will call me Blair-Hater, let's look at the stats (all stats via basketball-reference.com):

I'll admit to being surprised by the fact that Blair's numbers aren't all that much worse in the last two seasons compared with his rookie campaign. That said, notice that he started in far fewer games and played less minutes per-game his rookie season. So with that in mind, let's look a Per-36-Minute chart:

This seems to be a fairer representation of what Blair's seasons have looked like. Very nice in Season 1, a slight up-tick in some areas in Season 2, but a down-tick in others. Season 3 looks like regression across the board with the exception of small improvements in points and FG% and assists. I can already hear some of you shouting for advance stats to prove DeJuan's true worth, so here you are:

So what does this tell us? Blair has seen a drop in rebounding every year since his rookie season. His assists percentage and steal percentage have gone up, with his turnovers dropping. His total win shares have not been as high as his rookie campaign. So Blair has gotten better at dishing the ball, stealing the ball, and turning the ball over less--all good things to be sure. Surprisingly his offensive rating is as good as his rookie season. He also had his worst defensive rating last year, albeit not by much. However, there is clearly a theme that even in the areas in which Blair has improved, it has not been significant improvement.

So what does all this mean in the big scheme of things? Well, first let me say that Blair was not as bad as I remember him being this past year. I really had a hard time remembering him doing as well as the stats point out. That said, he has clearly not only not drastically improved, he has even regressed from his rookie season in some very vital areas of his game--most notably, rebounding.

Why is that? Well, if you notice, DeJuan only started 23 games his rookie season. Meaning he was playing against a lot of second units and less-talented big men. Blair was able to have a very nice rebounding season, leading all of us to scream BLLLLLAAAAAIIIIIIIRRRRR! many times a game. Ahhh, the memories: 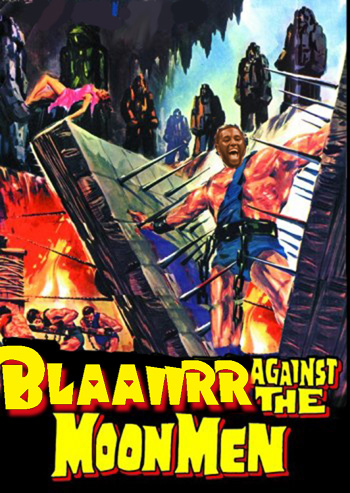 Who could forget such classics as this?

Listen, I know Blair is, more or less, playing in a position that makes it hard for him to succeed. He's undersized, he has trouble with his weight and he has the ever-popular built-in excuse of having no ACLs. I understand that Blair is playing on a team that doesn't run many plays for him and that he is expected to do many things that might not fit his personality. So what can the Spurs do with Blair?

In my opinion, Blair should be moved to the second unit. In the past that's meant starting either Tiago Splitter or Matt Bonner with Duncan. However, with Boris Diaw, the Spurs now have a better starting option than Blair and can let the young player develop into a nice bench/role player. If the Spurs can do that, I think they'll have a much better chance of getting more production from DeJuan this season. Blair is still on a good contract with the Spurs and I think he could bring useful energy off the bench.

The only issue I can see with what I have proposed is that Blair doesn't come in with the right attitude. I have no doubt that Blair is a good kid and he seems to enjoy life. That said, I do have my doubts as to his work ethic and overall commitment to the game. I tend to think that Blair has had a lot of his basketball success come to him easily and now that he's going to have to really work at things, it might be difficult for him to take that next step. I really have nothing to back up this opinion outside of my personal feelings and observations of DeJuan and his game.

If Blair can get it together I expect the Spurs to trade him, let him go at the end of season, or try to re-sign him to a contract that is similar to what he has now, which I doubt he'll go for. I sincerely hope that Blair is put in a better situation to succeed and that he takes advantage of it. Blair has the capability to be a special guy that helps this team be better, and helps Tim Duncan, Manu Ginobili and Tony Parker get another ring.