For Spurs, I-35 leads to Biggest NBA Rival

Share All sharing options for: For Spurs, I-35 leads to Biggest NBA Rival

First I want to say to everyone reading, I've missed you. It's been too long. So long, I'm beginning to wonder if I've forgotten how to do this whole writing/typing thing (It took me roughly five minutes to write this cute little intro). Anyway, onto this whole rivalry thing.

Isn't the NBA great? The season - when at its full length - takes up nearly 75 percent of the calendar year, and even when the offseason hits, there's no shortage of drama and interest in a league dominated by divas and Dwight Howards (he's earned his own category, above divas and drama queens). Ah, but then there are the Spurs. Cerebral, quiet and, uh, boring somewhat uneventful. Then again, Tony Parker did get involved in a rapper bar fight and had to wear rec specs during the Olympics. That's about all the excitement we've been given the last couple of months: a Frenchman's impaired vision. But now the season is upon us and it's time for revenge.

OK NOW onto the rivalry thing...where the Dallas Mavericks are Enemy Numero Uno.

Since San Antonio entered its illustrious run, one that recently earned it the title 'Team of the Decade' by ESPN the Magazine, rivals have come and gone for the most part. The Spurs have maintained a high level of play since 1999, winning 50 games a season for the past 13 years. That's an NBA record, so it goes without saying nobody has duplicated that success. And you can go on... Since Tim Duncan entered the league, the Spurs have the best winning percentage in all the major sports, and no player-coach combination in NBA history has won more games together than Duncan and Gregg Popovich. So it's been fun. And as you look around at the other NBA powers, nobody has sustained the same sort of excellence, at least in terms of total wins.

While the Lakers do have five rings during the span, it wasn't a consistent run in the same capacity. Los Angeles didn't draft and develop, they traded and threw money at people at the appropriate times. And hey, L.A., you're a giant sports market. You can do that and make it work. Oklahoma City? Well, they're just too young and too new (though we saw first hand what that meant in the playoffs last year). Yes, they're the conference favorite, and the future is wildly bright for the Thunder. Seriously, I consider them to be an illegitimate love child created by the Spurs' front office and the Sonics' crappy records during the mid-2000s that developed into some super-freak man-baby that is here to take over the planet. Though it remains to be seen what happens with party boy Rick Ross James Harden and his beard in the coming months, we can agree this team is here to stay. But that hatred and animosity isn't there with them because former Spurs brass has been involved in the development. There's almost an inkling of pride, isn't there? You could make an argument for the Phoenix Suns as the Spurs' rival, but wasn't there always way more hatred from their side of the equation? Not to mention, that was kind of short-lived. Yeah, I remember the Goran Dragic show in 2010, but that Spurs team wasn't going anywhere anyway.

So that leaves us now with the Dallas Mavericks. Terrible and harmless for much of the Spurs' early success, it was more of a rivalry by proximity, which really is how almost every rivalry is formed. Think about it. Rivalry fires are fueled by fans, for the most part, and given the distance between the two cities and the relative ease of getting to the metroplex, it makes for plenty of confrontation and bickering. I have a ton of friends who are Mavs fans, mostly from being at school at Texas Tech. They were the worst. Hell, I'm DATING a Mavs fan who just so happens to be running our fellow SB Nation blog. She's OK though because it wasn't a lifelong thing, she was converted. Oh crap, that might be even worse. But I digress.

All of this does not stem from some long, deep-seeded hatred for one another. I mean, it's not like either team has this rich, illustrious, title-winning history that dates back to the days of the thigh-high shorts. Maybe there was always some regional rivalry, but nothing like it had become once Mark Cuban took over in Dallas. His ridiculous antics, snide commentary and stupid, stupid face angered Spurs fans (those River Walk quotes, though). Not only did he make very few friends in the Alamo City, he led a charge of loud-mouthed, somehow entitled Mavs fans clinging to his coattails. (I have this theory that Dallas fans are so entitled because of the pre-salary-cap NFL rings they won with Jerry Jones' money, and that it somehow translated to other sports. Am I being antagonistic enough? This is a rivalry post, right?) 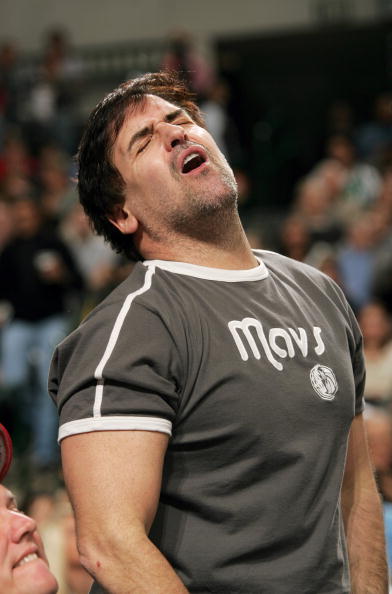 They were EVERYWHERE, looking to pop off at every opportunity. Yes, it was annoying, but Spurs fans always had the 'yeah but look at the ringzzzz' rebuttal. It was great, until 2006, that is. It was the year it finally happened. That moment where Manu Ginobili fouled the giant German in the waning moments of regulation, allowing the Mavs to sneak out of San Antonio with a Game 7 overtime victory. I was shocked. I drank a lot, probably. Oh it hurt. Though the pleasure I derived from the Dallas collapse at the hands of the Heat was palpable, it still didn't make up for the feeling of 'that would have been our fourth ring.' Hey, I was perhaps the only person in the country outside of South Beach (and front-runner dudes who like the Yankees, Cowboys, Lakers and Heat and wear stickers on their New Era baseball caps) who wanted the Heat to win in 2011 as well.

But I've matured throughout my 27 years of life. There's without question a mutual respect for what that organization has done. As much as Cuban bugs me, I love that he'd do anything for his team. He's brought the Mavs to where they are today and is responsible for that ring as much as anyone. And I'm happy for guys like Dirk Nowitzki and Rick Carlisle, two of the best in the league at what they do. Oh and Ian Mahinmi. But nobody else. Especially not Jason Terry. 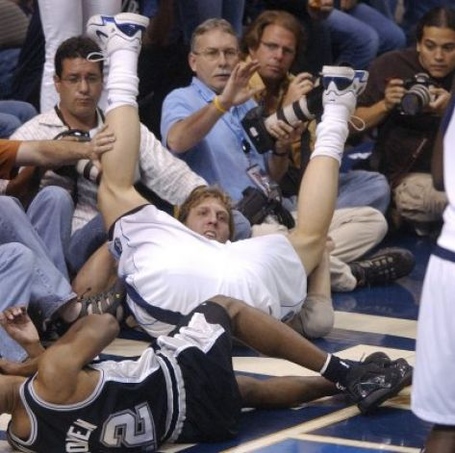 You're great, Dirk, but here's how I'll always remember you...

Some might argue vehemently for the Lakers as the Spurs' main rival. I can kind of get it, but it can't be. Yes, a Spurs-Lakers game in San Antonio is almost unbearable due to the number of L.A. fans in the crowd. There was this one acne-ridden dude who stood up nearly the entire game on April 11 (the one where Bynum grabbed 30 freaking rebounds) with his hands out, palms up, yelling 'WHAT, WHAT' to anyone who would look at him. I came to the conclusion that was basically one of like seven words he knew in the English language, despite being American, so it didn't bother me all that much. But, you know, Lakers fans.

So I get the Los Angeles argument, but it's not there. The Lakers had too much down time while the Mavericks were on the rise in the Western Conference. And again, location, location, location. The best rivalries exist in close quarters. UNC-Duke, Ohio State-Michigan, Lakers-Celtics (OK, that one doesn't work, but that only exists because they were clearly the two best franchises going back as long as modern-day basketball has been around...also it doesn't aid my argument so it doesn't exist). You get the point. High School through professional, sports rivalries are just better when fan-bases are near one another (oh yeah, Celtics and Lakers fans are every-freaking-where, so that explains that).

I'll never forget Terry's nut punch love tap in Game 5 of the 2006 playoffs (please note Cuban's griping in that video), and I'll never forget Bruce Bowen blocking Nowitzki at the buzzer of the same game. I'll never forget the And-1 in Game 7 that year, but I'll always LOVE that Mark Cuban basically paid Michael Finley to win a title in San Antonio the following year. 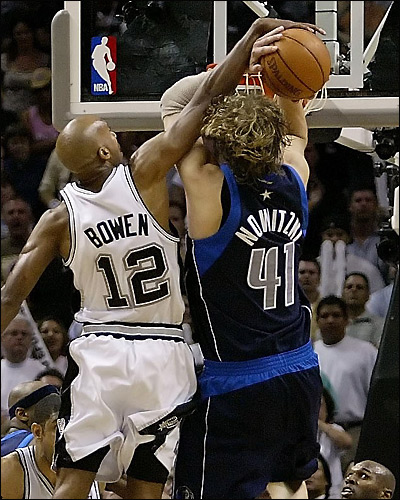 One other thing: I'll always love the memory of Dwyane Wade destroying the Mavs in 2006 and watching Dirk kick a stationary bike while all my Mavs friends watched in agony after already celebrating the championship to which they felt so entitled. I hated Dallas so much I couldn't stand to see that city win anything.

Doesn't that kind of say it all?