Not long ago, I wrote a post explaining why the Spurs needed to focus on getting defensive help at power forward, since Duncan was a center. That is still true on defense, where Duncan can't guard the increasingly more perimeter-oriented bigs and occasionally struggles defending the pick and roll. On offense, however, Duncan, indisputably one of the best post scorer of his generation, has been steadily evolving into a jump shooter over the past few years.

These are Duncan's shot selection percentages, courtesy of 82games.com. 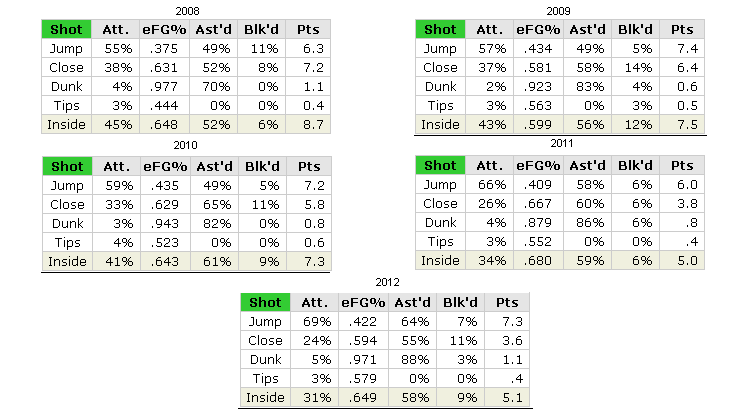 It's pretty clear that Duncan has been shooting an increasing amount of jumpers since 2007. He got most of his points from close in 2007/08, but that trend has reversed and now Tim gets twice as many points from jump shots that he gets from close. Part of that has to do with the Spurs offense: Duncan went from the first option and having the offense run through him in the post, to the second or third option on most plays as he's taken a back seat to Parker and Ginobili. The offense is better this way and Duncan gets to save energy for the defensive side, instead of fighting for position in the post possession after possession. The fact that he had to lose weight to avoid injuries made him less effective in the low block, but his efficiency from mid-range has, for the most part, made up for it.

Another factor is the players that have shared the court with Duncan. In 2007/08, Duncan was most often paired with a player who couldn't create his own shot in Oberto. In 2008/09, Bonner was the frontcourt player most often paired with Duncan, meaning Duncan had space to play in the post. After that, DeJuan Blair entered the picture. The most common Spurs lineup in 2009/10 included Duncan and jump shooter Antonio McDyess. However, when Dice was resting and when Blair was starting, Tim shared the court with DeJuan, whose jump shooting only accounted for 25% of his offense with a very poor percentage in 2009. From 2007/08 to 2009/10, Duncan went from attempting 55% of his shots from the perimeter to 59%, which is not that big of a jump on its own. Over the next two seasons, that number climbed to a whopping 69%.

The other number that jumps from year to year is the percentage of jump shots that are assisted. Duncan was only assisted on 49% of his jumps shots in 2007 while that number steadily climbed to 64% on 2012. That tells me two things: the offense doesn't run through Tim anymore and the Spurs actually view Duncan the jump shooter as a legitimate option, not as a last resort escape valve. Both the "eye test" and his efficiency numbers illustrate that Duncan is a bona fide weapon from mid range. On admittedly less attempts, Duncan's 45% from mid-range this season ranks him eerily close to Nowitzki's 46%.

The problem is not that he's taking jumpers, but that he's not diversifying his attack much. According to Hoopdata, Tim never exceeded 3.2 attempts from 16-23 feet before this past season, when the number of attempts from that distance sky rocketed to 4.2. The only centers that attempt more shots from there are Andrea Bargnani, Al Jefferson and Byron Mullens. On attempts at the rim, however, Duncan ranks 13th, with below average efficiency. Fortunately, Duncan has been able to get himself to the line this season, bouncing back from a career low 14 free throw attempts per 36 minutes to an above average 16.1. That allowed him to post a true shooting percentage of .529%, his best of the last three years and closer to his career average of .549%

That being said, it's not uncommon for players to evolve as they age and Tim needed to become a better shooter to extend his career. Everyone on the roster (except Tiago, for some reason) can play next to Duncan because of his versatility, and the better he gets at mid-range jumpers, the more room Tony Parker will have when he drives to the basket.

My concern, as I mentioned, was the dipping in free throw attempts during the 2011 season, but he corrected that in 2012. Tim was aggressive when he had the ball in the post, but mainly, he got better at drawing fouls while facing up. Whenever an opposing center closed out a little too hard on Tim, he'd use that to pump fake and drive, usually leaving behind his defender and forcing the helper to foul. When the opposing player didn't fall for the original pump fake, he'd use head fakes and jab steps to create separation, then pump fake and drive, getting similar results. Basically, Duncan used the type of cerebral approach that made him unstoppable in the post and adapted it to a more perimeter-oriented game. Timmy is nothing, if not smart and adaptable.

How does this change the Spurs' offense?

The offense is fine and all these changes have already been incorporated to the sets the Spurs run. The only problem is that the Spurs can't simply dump the ball to Tim in the post and watch him work anymore, but sometimes the team seems to forget this. It's understandable for Pop, Manu and Tony to go to Tim when things are not going well after years of having that security blanket. And Duncan can still hurt teams in the low block even if he's not automatic from there, but it should be one of many alternatives and not the default go-to option when things go awry. Often times in the past season, the Spurs would call "4-down" on consecutive possessions, trying to get some post scoring. While sometimes Duncan would in fact score, it was never without using a lot of shot clock and freezing out teammates. That, in time, stagnated the offense.

The Spurs should definitely keep Duncan in the low block as an option but should not abuse it, since the returns are diminishing and the offense seems to run better through the perimeter playmakers.

How can the Spurs get Tim more close range opportunities?

I'll leave that to Pop, but a simple way to balance his scoring would be as the roll man in pick and roll sets if Diaw continues to start. Duncan is a fantastic screener, and with Diaw, Green and Leonard spacing the floor, Tony and Tim could really hurt teams. It would also add a little variation to the type of pick and pop action he runs with Parker, making it less predictable. If Blair starts next to Tim, the Spurs could take advantage of DeJuan's solid passing to try the type of high-low passes Tim used to receive from Oberto. In those situation, Duncan already has good position and only has to turn and shoot.

Duncan has been re-signed for two more years, and his impeccable conditioning and transition into a jump shooter makes me confident that he will continue to contribute at a high level for the duration of his contract. Continued improvements from DeJuan Blair and Tiago Splitter will hopefully make the need for Duncan's inside scoring less pressing, but the Spurs should continue to find ways to get Tim some easy shots. In the meantime, let's just enjoy the fact that Tim Duncan has mastered another part of the game.