Share All sharing options for: Argentina 93 - Nigeria 79: Winter Is Coming 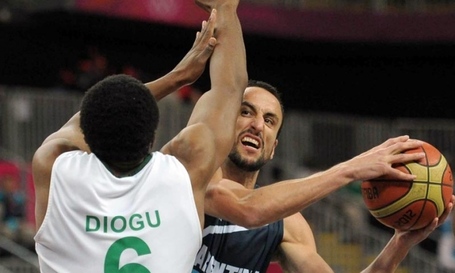 Summertime is over. No more games of little meaning and foretold outcomes in these Olympics for my dear Argies. Nigeria and Tunisia were as easy as they seemed on paper, and now all that is left are the USA, and a difficult quarterfinals deathmatch. But hey, no one said Olympic medals are easy, right?

Check after the jump for a classic honest-to-goodness hack recap (tm), in which a blogger that missed half a game tries to describe a boring, predictable affair while PTR continues its usual off-season hibernation.

This was a story of one quarter, the first. Unfortunately, I started watching the game at the half so you could say I missed the entire story. After coming out the gates firing on all cylinders, Argentina proceeded to spank Nigeria by scoring two points for every one they allowed, and finishing the quarter 37-19. Game over. The team basically coasted the rest of the way, giving playing time to players usually relegated to the bottomless depths of Lamas's bench.

There are few surprises in Argentina at this point in the competition. Manu Ginobili continued to play spectacular basketball, showing off his keen sense of the moment by always providing Argentina with what the team needs. Yesterday it was passing and penetration. Tomorrow it will be something else, and he will be there. Spurs fans, take notice: there is a lot of magic left in the scrawny body hiding behind that prominent nose. Luis Scola, too, was very much Luis Scolaish. Dominating on offense, clever when passing the ball, crafty on the pick and roll. His offensive dominance of the international game is not a surprise, and he can usually be counted on to produce 20 points out of thin air, like a lumbering magician with greasy long locks and copious body sweat.

Everything starts from our two main voices, but that is not to say that the choir was not in rare form yesterday. Priogioni played and had 4 assists in limutes, but barely looked to score. Any upset over USA or Spain depends on at least three or four triples by our starting point guard, so we can only hope that he recovers in time. The Good Delfino decided to show up against Nigeria, and it was good - but Bad Delfino is always lurking around the corner, biding his time. Campazzo proved he is not a bad choice as a back up point guard, moving the ball around quickly and finding open shooters. Yet maybe the most encouraging aspect of the game was Chapu Nocioni, shooting 4-of-5 from deep and being his hyperkinetic self during the first half, before fading out into aimless energy as the game wound down. Any fan of this team knows how important Nocioni can be, a force of nature that could be just as chaotic as Manu in his youth. I am crossing my fingers.

So, we won. Argentina won. Yacaré Kammerichs showed London what a truly fierce beard looks like, Leiva danced around like an epileptic Julio Bocca, and at one point Leo Gutiérrez did something other than shooting a three. True story.

Now comes the Meme Team, fresh off a scare against Lithuania and probably as focused as they have ever been to this point. The expected loss would relegate Argentina to the third place and a quarterfinals game likely against Spain. more importantly, the winner would meet the USA in the semifinals, greatly reducing the chances of a silver medal. To avoid the USA, then, we must beat the USA.

I don't know how I feel about this. I don't think the US team is unbeatable, but I do believe that you can only capture lightning in a bottle once. Do we really want to find that magic at this point in the tournament? The loss to France looks just as bad now as it did when it took place.