As NBA Free-Agency starts up we all hope the Spurs can land the best players for peanuts. Or at least peanuts and good tune. One has to wonder how much future can San Antonio bet and still be able to compete in the present? As the Spurs golden age, as I'm now referring to it (literally, I just now started), starts to come to an end, how important is it for the front office to get guys that can help this team in the future? I think there are two schools of thought.

First, let's look at the "pie in the sky" scenario that pretty much never, ever, ever happens: Your team gets a once in a generation group of players and has arguably the most successful 10-15 year run in modern era of American sports. Then as that team begins to wind down, you magically get the next great player via a cunning trade or amazing late round draft pick and your team continues it's dominance for another decade. This simple does not happen, in any sport in North America. This isn't soccer, we do not have the ability to borrow hundreds of millions to buy guys from all over the world so that we can win titles. The closest thing to that in North America is baseball with the Yankees, but that hasn't really worked out for them over the last 10+ years.

So then, what should San Antonio do, besides dupe the NOOCH into a Blair for Anthony Davis trade?

Titles are rare. I know they don't seem that way since somebody wins one every year, but things have to break just right for your team. Match ups, health, luck, and many other variables play a roll in a teams chance to win a title. Not the least of which is talent. The job of a front office, as I see it, is to put their team in the best postion to win titles as soon as possible. Sometimes that means trading talent for prospects or draft picks. Other times it means giving up a guy who has a bunch of potential for a proven commodity. Whatever the case, the best in the business have to be emotionless in their valuations and calculating in their moves. Nobody is perfect. Nobody.

San Antonio has two options. First, they could simply start building for the future. Only look at and bring in guys who will be long term players here. This philosophy would likely mean trading current guys, like Tony Parker, in order to get a return on that player before they simply retire. I think the Spurs could likely get a very nice haul for Parker. Tell me the Nets, who have been rumored to be trying to trade for Joe Johnson* wouldn't leap at the chance to land Frenchie McWonderbutt. The Lakers would probably send the Spurs Pau Gasol for Parker. Houston, Dallas (if they don't get D-Will), Memphis, Phoenix, Portland, New York and others would likely all be interested. Some of those teams have some really nice players.

*A quick aside, I saw somebody said that Danny Ferry should automatically win Executive of the Year if he can get rid of Joe Johnson's contract. I'd have to agree.

The second option, they can go out and try to sign and/or trade for the players that would help put this team over the top and in postion to chase another ring. That may mean getting a guy like Marcus Camby who is, let's face it, old. He is not a player that this team would ever consider for the long term and probably wouldn't be asked to play more than 20 minutes a game. Most of the options that the Spurs could afford would be older players or unproven guys. It seems like a no-brainer to say, "Go for the younger guys, look at Danny Green and Gary Neal, ect.", but the reality is that doesn't always work and on top of that the right guys have to be available. If San Antonio wants to make a trade it would likely cost them younger players like DeJuan Blair, James Anderson, Tiago Splitter or Gary Neal. That certainly wouldn't seem like a move to help the future at all. 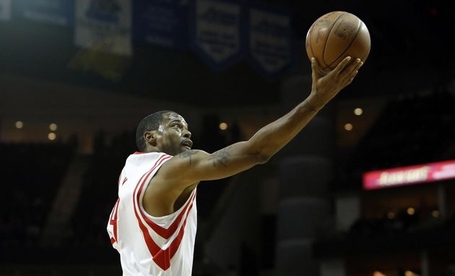 Could Camby become a Spur?
via cdn3.sbnation.com

So what should the Spurs do? For me, it's clear. Option two is the only viable way to know that you've got a chance at a title. If the Spurs were to start trading elite guys what's to say that they could even get equal value? That rarely, if ever, happens in blockbuster trades. The Spurs lost in 6 games in the Western Conference Finals. They are one of the 4 or 5 best teams in the NBA, as it stands today. Why would you break up a team that has had that much success recently when it appears that all they need is a player here or there to really boost them from a title contender to a title favorite? The clear answer, in my eyes, is you wouldn't and shouldn't break that up.

R.C. Buford and company are smart enough to realize that if a young guy comes along with the same skill set as an older player that for the sake of the future, take the younger guy. Problem is, that just doesn't happen very often. Which means the FO has to take a risk and to get that older player, who may break down or may end up being just what the team needed. The alternative is taking a risk on an unproven young player who may end up being the next Danny Green or may just be awful. Either way is a risk, but at least the reward for the risk is title contention and not lottery balls. Play for titles now and let the chips fall where they may. Guys like Tim Duncan, Manu Ginobili and Tony Parker deserve to end their careers as they started them, winning in San Antonio.