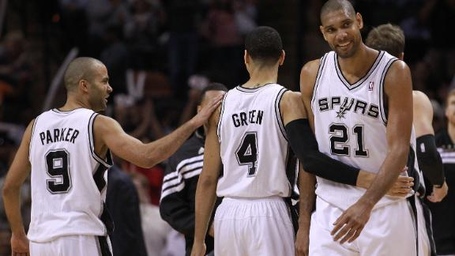 Okay. Let's get one thing out of the way:

[For a secret message to the referees, select the below, non-existent paragraph.]

FUCK YOU, REFEREES. I hope warts appear in dank, out-of-the-way zones of your shriveled bodies. You have singlehandedly encouraged every NBA conspiracy theorist amongst the Spurs fanbase for the next 20 years. As much as it irks me to complains about the calls, as if that should be beneath me, I felt for once that you truly helped decide the outcome of this game. Let players play in an elimination game of the Western Conference Finals. You killed every single ounce of momentum the Spurs had, and did your very best to take Jackson out of his game, on a night where he was invincible. You awarded free throws to Durant for a play that the rules say does not call for free throws. You pushed and prodded and butted your way into the thick of this game's flow, and did not call it evenly. Fuck you for not doing your job on a night where the dreams of thousands of fans partly depended on your performance. Fuck. You.

Regardless of the big hand they received in this particular game, the Thunder were worthy opponents. They wrestled control of this series from the Spurs playing with heart and skill, and Durant is certainly an all-time talent. I expect him and his group to dominate the Western Conference for many years, and if my Spurs are not there to confront them, I am sure I will enjoy watching them play. I have no love for the silly staredowns of Perkins and Harden, but young'uns be young'uns, and Durant is nothing but a star. He is the kind of nexus fans of basketball cannot help but be drawn to. Good luck in the Finals, Kevin.

And the Spurs... It is hard to find words that will resonate with us after such a hard loss. This season came out of nowhere, and both the impossible streak and the four straight losses ensured that the fall would be painful. I am just as shocked at the turnaround we suffered this week as the rest of you. But as the shock subsides, I will be right here, cheering for this team, enjoying every minute they give me. Our sexagenarian heroes have at least one more championship run in their creaky bodies, and I will hang onto every single minute that Tim Duncan, Manu Ginobili and Tony Parker give me, from today until the day they retire. They are magicians, entertainers, warriors, the kind of players that justify my passion for the game. Jackson's craziness was the salt of the earth, Green's emergence was the cherry on top. And Kawhi, that emotionless, inexplicably savvy rookie, carries our future with elegance. Make no mistake, guys. This team will be in the thick of it again next season, and maybe, just maybe, we will be able to challenge the Thunder once more. All the way.

This sounds like a goodbye, but to me it will only be a "see you tomorrow." I am closing in on 45,000 comments on this blog. It has been, and most likely will be, a consistent part of my life. The virtual sports bar I go to every night to share the ups, the downs, the Korean non sequiturs. I have met many good friends on this site, and expect to meet many more. I love this blog, because I love its members. So I will be around every day, stuck in those Loser Threads, posting random childish comments and just enjoying myself immensely with my friends. I hope you will be there too.

The Spurs are not dead, my friends. We will retool, tweak, tinker and fine-tune, and when October rolls around, we will once again be a force to be reckoned with. One more year, like always, refusing to go away no matter how much we probably should. And Pounding the Rock will be right there, to cheer and celebrate and mourn together.