Today is June 6, 2012. 6/6/12. Today our Spurs play the Thunder in Game 6 of the Western Conference finals, having lost 3 straight games. These are dire times for San Antonio fans. Our beloved Spurs, having had their greatest win streak snapped, seem to have been stuck in a funk. A deep, nasty and unabating funk. Tonight is heir last chance to get out of that funk.

I have been trying to write this preview for over two hours and I just finished the first paragraph. I'm afraid this is going to have to be a rather short and sweet. I do have a real job that requires my attention in just a few short hours. Tonight the Spurs will make their stand in a city that has tried to rip off the Alamo City's unique downtown, unsuccessfully I might add. It's not time to reminisce about how great a year it's been, it's time to get pissed and take it to those young punks north of the boarder.

Here's a few things the Spurs need to do better in order to win tonight:

In their last 3 games the Spurs have been very bad when handling the ball. San Antonio has turned the ball over 52 times in 3 games. When you're at this level you can't expect to win games when you're that careless with the ball. This team has made a living this season being smart with the ball and in order to extend this series and their season they'll have to get back to playing with the high BBIQ we know that they have.

The best players have to play the most minutes tonight. We can't afford to see another 15 minutes of -17 and 0 for everything from Gary Neal. That said, I think Jackson should start and Manu should come off the bench. San Antonio's bench has been rendered useless this series because they aren't as good as the Thunder's starters OKC has an 8 man rotation at this point and the Spurs can't afford to let Gary Neal's horrible play help cost them 17 points again. Of course, if Manu is going to just go off again, I'd be fine with him starting.

Tony Parker must play the type of defense we saw from him in the 4th quarter for the whole game. People, including myself, don't give Frenchie McWonderbutt much credit for his defense, but he really turned the pressure up on Westbrook and helped the Spurs have a fighting chance in Game 5. I hope to see that intensity from the outset in tonight's game.

Somebody in the front court, not named Tim Duncan, will have to play well. I'm looking at you Boris. The not so "Wee Frenchman" has not been agressive with his shot or drive in the last few games. This team is much better with Diaw going strong and making plays. If Splitter, Bonner or Blair see the floor they need to be agressive with their shots and/or rolls on offense and don't be afraid to knock a "young gun" on his ass on defense. 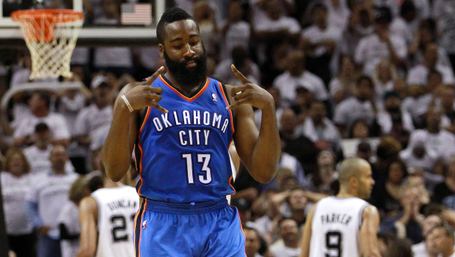 If I was getting to choose, this is the "young gun" I'd pick for being knocked on his tookus.
via i.i.com.com

This team is unlike any that I can remember. They don't have one truly dominante player. They are a team and they win and lose as team. I think you've seen an OKC that has truly tried to fashion themselves after the Spurs and have done a really good job over the last 3 games of doing their best Spurs impression. Imitation is the sincerest form of flattery after all. I miss the old Thunder, more of the old please.

I'm really hoping the Spurs don't get a bad call in their favor early tonight. It seems like the refs spend a large portion of the game trying to make up for that call and then they foul out Perkins who is my favorite offensive weapon for the Thunder. I'd like to see him on the floor late in games not watching from the bench. By the way, Pop, should you find that Perkins is in the game, you should double off of him, in my humble opinion.

As bad as the officiating has been, and it's been bad, the Spurs haven't really played well enough to win. At this level you can't play 24 minute games and expect to come out with a W. Tonight these Spurs will need to battle for 48 minutes and show the championship heart we all know they have.

I'd like to see more of Danny Green this game. I think he's a better option than Neal even if he can't hit his jumpers. Neither can Neal in case you didn't notice. Green's defense is so much better than Neal's. My wife can attest to the fact that I was calling for a permanent Neal benching on Monday, in very colorful ways. Green just brings more to the table.

Oklahoma sucks. There I said it. It's a state where cheating is celebrated (see: Sooners) and all their sports teams are full of Texans because they can't grow winners there. Come on, their state motto is "Oklahoma is OK". Who are they trying to convince, really?

Here is a song to get you pumped up:

Game Prediction: I'm going with my heart on this one. Spurs win in a tight one. Now let's go Spurs! It's time to pound that effin rock!

Tony must dominate Fisher, and NBA league pass is recommended for those who are willing to pony up the cash. Almost every Spurs game will be broadcast there, which is especially helpful for those of us who aren't in the San Antonio area. Please don't post links to illegal game feeds in the game thread. Links to illegal feeds are not permitted on SBNation, but you can probably find them out there on the internets if you're resourceful and desperate.