Share All sharing options for: Spurs fall, but one last chance awaits

It was inevitable just one week ago. The Spurs were easily on their way to an NBA Finals clash against the Miami Heat, and San Antonio would once again return to the championship glory that has evaded it for five years. The Silver and Black were operating like a machine, looking every bit as unstoppable as ever before, that is, until vulnerability suddenly hit. The seemingly invincible No. 1 seed was brought back down to a level of mortality as glaring and deafening as the silence that cloaked the AT&T Center at the final buzzer on Monday night, and the few orange-and-blue-clad Thunder fans' cheers harshly echoed past the thousands of stunned faces slowly and begrudgingly making their way toward the arena exits.

The Spurs spilled a single drop of blood into the water upon which they were so effortlessly cruising through Game 2, and Oklahoma City attacked.

The Thunder once again capitalized on a bevy of San Antonio turnovers and held off a throwback, dominant 34-point performance from Manu Ginobili for a crushing 108-103 victory on the road in Game 5 of the Western Conference Finals as they head back to the extremely comfortable Chesapeake Energy Arena for Game 6. The visitors had seen this all play out before, it was just a little different this time. Much like in Game 1 of the series, Oklahoma City managed to control most of the game for three quarters, keeping San Antonio at bay and responding to each and every run the Spurs launched. And just like the first game only a week ago, the Thunder entered the fourth quarter with a nine-point lead. But this script had been changed.

San Antonio went on the kind of late run you'd expect from a champion, improbably closing the gap to just two points on a Tim Duncan bank shot with 50 seconds remaining. But as the fan noise surged to the loudest it had been all night; as it crowded the (supposedly) young and inexperienced Thunder to the point of claustrophobia, 22-year-old James Harden calmly stepped back on Kawhi Leonard and drained a top-of-the-key 3-pointer that was not only the eventual game-winner, but a statement that this team had come of age right before our eyes.

"These guys are hard to guard, talented, hungry, athletic, and the bottom line is you can look at whatever you want, but you can't turn it over 21 times for 28 points against a team like that. They're too good," Gregg Popovich said. "Turnovers have been a theme throughout this entire deal, and part of that is us being sloppy or not delivering the ball at the right time, and part of it is that they've played really good defense."

The Spurs have given the ball up to the Thunder early and often in this series and Oklahoma City has taken advantage. Whether it's the youth and energy that have made the biggest difference or their length and athleticism, or a blend of all of these, the Thunder have forced San Antonio into uncharacteristically difficult situations all series, and the typically composed Spurs have seemed rattled. While you can't ignore the high giveaway rate, turnovers can be overcome if not committed at the most crucial times. Yes, there were a few badly timed mistakes, but Oklahoma City had a few of its own. The Spurs were right there in the end, however improbably, the problem was how they reached this predicament in the first place. And if you look at this game more closely, the Spurs played from behind the 8-ball for nearly the entire game for a reason very unfamiliar to them.

When Tim Duncan gets into foul trouble it spells doom for San Antonio. 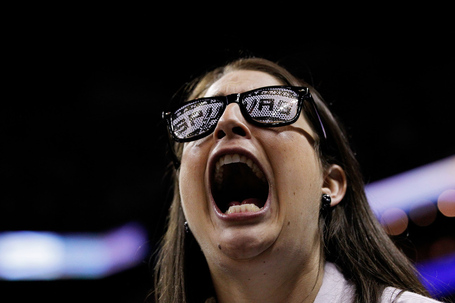 The narrative all season long has covered the maturation of Tony Parker (20 points, 4 assists) and his newly found leadership qualities that had him playing at the highest level of his career. And that's justified. He's been fantastic. But when the game hinges on every possession, and as great as Parker is, San Antonio's hopes hang from the No. 21 that marks the jersey of one of the greatest players to have ever lived.

Duncan's floor presence on both sides of the ball is as vital to the Spurs' title hopes as any player's in the league. He's still one of the NBA's best offensive threats from the post and his defense this season has been every bit as good as it's ever been. When the game slows down and the offensive cracks begin to shrink, his inside game alleviates most of the pressure. On defense, for a team in dire need of a rim-protector, he has been an absolute beast. But in terms of those qualities in a basketball player, he's all San Antonio has. Tiago Splitter and Boris Diaw have been very good, and Matt Bonner and DeJuan Blair have done their jobs providing fodder for the ongoing debate over which should be getting playing time (if either), but the falloff after the Big Fundamental is substantial. And on Monday night, it was too much.

Duncan received his second foul at the 4:34-mark of the first quarter with his team up 15-12, and the Thunder promptly went on a 16-6 run over the ensuing five minutes. When Duncan finally re-entered with just more than six minutes remaining in the half the Spurs were within five points at 41-36, but it felt like the damage had already been done. With Duncan on the bench the game had shifted, and the continuity of the rotation had been disrupted by the all-too-familiar and unsightly Bonner, Blair combination. The Thunder had picked up the momentum and reeled off a 9-0 run over the four-minute stretch directly following Duncan's reinsertion, though San Antonio was able to knock out an 8-2 run of its own over the half's final two minutes.

And it was a swing that put things back in the Spurs' favor. San Antonio ripped off a 23-9 barrage that had Oklahoma City on its heels for the first time since Game 2. The offense had finally found its rhythm and was flowing the way the home crowd had seen it all year. Spurs basketball was back, until Duncan's hard hedge on Durant resulted in the league's leading scorer falling over the big man's right leg. 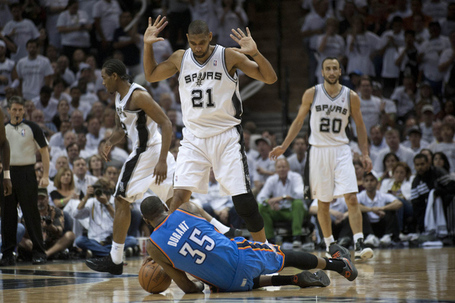 Duncan's fourth foul was a late turning point, as the Spurs' backbone watched his team relinquish the lead for good just minutes later.

He left again with 4:23 left in the third and Oklahoma City went on an 18-3 run that spanned into the opening moments of the final frame, and despite the Spurs' effort in an epic comeback bid it was too much to overcome in the end. The Spurs cut the lead to two points on two different occasions in the final two minutes, but the lead they had taken back was given up for good with 2:41 left in the third. Duncan still managed 18 points and 12 rebounds in 33 minutes of court time, but more was needed.

"I'm ready to play right now. It's a heart-breaking way to end that game. I'm ready to get out there and lace ‘em up again and go," Duncan said at his usual post-game interview spot, positioned against the corner wall of the Spurs' locker room. "They're a heck of a team. Very talented. They made some very tough shots when they had to and they executed their stuff.

"We played good for stretches but that wasn't good enough. Too much back and forth and not enough consistent play from us."

But Duncan said it: this OKC bunch is a heck of a team. The change in momentum we've seen during this series has been surreal. The Spurs had owned the young Thunder for the last several years, and through two games it seemed as if nothing had changed. But then it happened, like a light switch clicking on. Whatever "it" was, OKC found it. It was easy to chalk up the Spurs' 20-point, streak-ending loss in Oklahoma City to the crowd's emotion with their team coming back home and the understandable mental fatigue San Antonio had to be feeling trying to maintain the highest level of play. But it was more than that. Suddenly the Spurs were no longer invincible and the Thunder had discovered the machine's weakness. While this series is certainly not over it's important to keep a perspective on some things. Regardless of the outcome of the next one or two games, Oklahoma City has arrived and isn't going anywhere for a long time.

Manu Ginobili - who started for the first time since the opening few games of the season - was remarkable on this night. His 34 points, 7 assists and 6 rebounds in 38 minutes were just another reminder of how special he truly is when healthy. But even his brilliance was not enough to outduel the Thunder's young guns. His post-game comments fell in line with his teammates', praising the youth, energy and athleticism of his team's opponent as obvious reasons for Oklahoma City's success. And as the odds have suddenly become highly stacked against the Spurs, Manu was asked whether this team could possibly bounce back emotionally after losing three in a row following such an unbelievable win streak.

"Nobody is going to feel sorry for (us), we've just got to go compete. We know it's hard to beat them there, but it's what we have to do. We've got to step up and play the best game of the season."

As the media gathered in the locker room waiting for Tim and Tony to make their press appearances, Leonard sat quietly at his locker, wrapped with an ice pack on his lower back. He wasn't saying much, if anything at all, and just seemed to be staring at his locker as he waited for more ice to arrive for his left knee. He's always been a quiet guy, but on Monday night he seemed despondent. And with the media focused on Duncan standing at his corner, as Leonard fastened the final button on his shirt, he was met by the only person who might be able to get through to him right now.

Popovich entered the locker room - which he never does following a game amidst the media scrum - and walked right up to the 20-year-old rookie who is less than a third his age. He put his hand on Leonard's broad shoulder and said something that led the rookie to nod in acknowledgement. Whatever it was he said, and whatever the reason for the brief heart-to-heart, Pop showed he's not the rigid old man most see him as. He knows this was only Game 5, and more importantly he knows he needs his youngest player if this series is to continue.

For the first time all season this team looked human. Suddenly, this machine not only seemed mortal, it appeared wounded. But if there's one thing you hope vulnerability invokes, it's a higher sense of pride - perhaps the most important human emotion in sports. There's no shortage of that with this team, especially in certain corners.

"I definitely believe, you know me," Stephen Jackson said following his 13-point performance. "I'm not submitting to nothing. (We're) gonna go win this game. 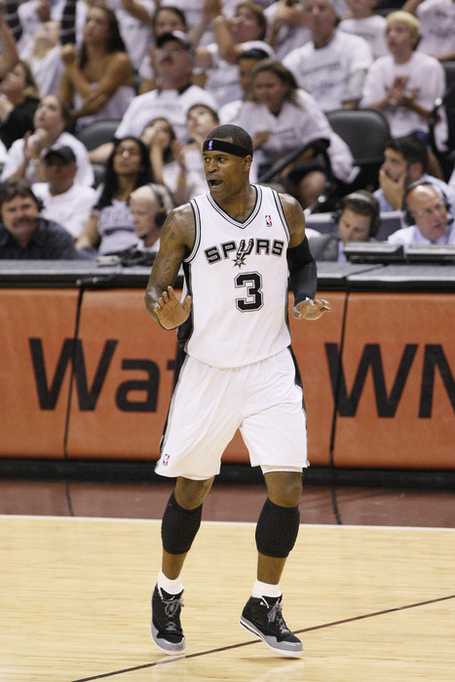 Will we see more heroics from Cap'n Jack?

Speaking of perspective, just a few great pictures of the important things in life. 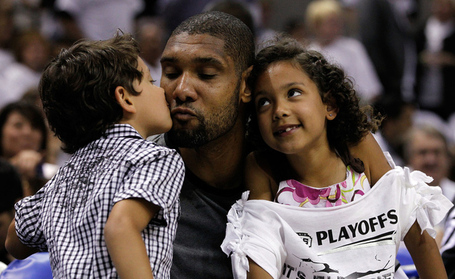 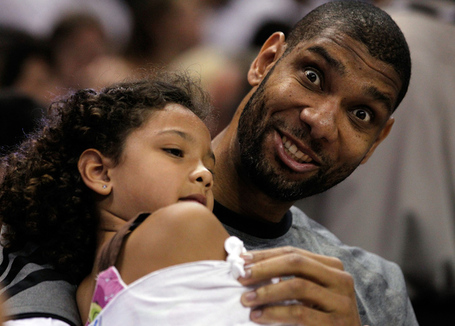