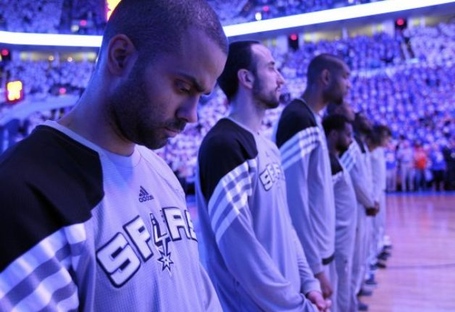 It was a perfect season, the stuff legends are made of. Winning streaks, developing role players, playoffs series swept with a flick of the wrist from the corner. The Spurs is a team that reinvented itself before our eyes, season by season, until the half-hearted elegies turned into grudging respect. We only needed the perfect ending to validate every single second of our magical run.

Then we lost, and the world is currently coming down around us. Lost 3 times in a row, too. Our first such negative streak since Pop lead the CIA team to a double overtime victory over the Mossad-MI6 combine in 1965. We lost game 3, and our reaction was a calm nod in the Thunder's general direction. They were a good team, yes. But it was okay, because we were a better team. (You cannot write TEAM without Tiago grEen Neal Matt, right?) Then we lost game 4, and we looked at each other, worried but trying to find strength in companionship. One more chance to regain the famous "momentum", that vague substance that many claim is responsible for tipping the scale when the BBIQ is comparable.

Now we lost the game 5. If there is one thing I cannot predict, that is the reaction of the fans in general, and this blog in particular. Pounding the Rock is mercurial, yet populated with lots of fans full of irrational optimism. If I had to guess, I expect lots of venting tomorrow, but a strong dose of hope built up before gametime on Wednesday. But you know who doesn't worry me? You know whose reaction I can predict with the accuracy of a half-crazed wizened seer living in a cave, of a mutant fusion of Nostradamus and the Oracle of Delphi, plus some random I Ching self-help book?

Tomorrow morning I plan to do my best to stay away from any and every major sports news source. However, I sincerely doubt that I will be completely successful in dodging the Devotees of the Odds, who will regurgitate something posted by the Elias Bureau as if ridiculously small samples and laughable extrapolation of basketball realities had any pull on this series. "34 of the last 15 teams blah blah blah. Spurs lose." It is irrelevant. How many of those teams had Manu Ginobili? Not. Enough.

We have seen what this team is capable of when everything clicks. We saw it not three games ago, in this series, during that magical run on the third quarter of game 2. We saw it last week. The Thunder have proved to be a formidable team, built on the shoulders of an unstoppable scorer - but I know the Spurs can match them. I know it, because I watched those first two games, and I watched them play for 66 games in a hellish regular season. If you are reading this, chance are that you know it too. Wherever Tony Parker is right now, licking his wounds in private or drowning his sorrows in smelly cheese and phallic bread, I assure you that he knows it too. I am sure that Tim Duncan is right now practicing his three-point jumper in his mind, taking the shot that he could've taken, running that final play over and over again. And I can imagine Manu, grinding his teeth as I grind mine right now to keep myself from cursing near my sports-challenged, drowsing Indian roommate, who views my obssession with basketball as something akin to malaria. Those three giants of the NBA are on our side, and they will play their hearts out for 48 minutes on Wednesday. How can you not hope?

Those of us who shared those forlorn game threads in the years post-2007 are grizzled veterans of the infamous elimination game. In previous years, I have asked the Spurs to go down swinging, to shoot for the moon and hit it right in the middle, to hell with the stars. I have asked for Popovich to put the game firmly in the hands of Tony, Tim and Manu, and let the Spurs go as the Spurs will, because to me those three embodied the Spurs. Everyone else was secondary. As I look at this year's do-or-die win-or-go-home game 6, though, my heart asks for something different. Despite his current struggles, I want Green to have a part in our victory, to rediscover that steady hand that led us through many similar comebacks. I wish Jackson and Diaw could prove their mettle once more, and transform a good rotation into a spectacular one as they have for aeons (or weeks, whatever). And I want Kawhi to soar for a dunk and come back down to shoot a free throw, nary a smile on his face. For better or worse, the 2011-12 Spurs are more than Tim, Tony and Manu. They are a team of great depth, and when the stars align and the wind fills our sails, they are the best team in the NBA.

It still is a perfect season. The stuff legends are made of. Now let's go out and win that fucking game 6.