The Western Conference Finals resume tonight with a hyped and hyperbolic importance that is, for once, justified. This game will probably come to define the season for the Thunder and the Spurs, and if the Western champion turns out to be noticeably stronger than the Eastern champion it could define the 2012 season as well. The only NBA narrative anyone is talking about goes like this: the Spurs represent teamwork and distributed responsibility in the mold of the 2011 Mavericks, while the Thunder and Heat stand for star power and the older, more established way of interpreting and marketing the NBA. For Spurs fans tonight is the crest of a familiar wave of hope and dread, the first real dose of playoff anxiety since the 2008 run.

San Antonio's fans have been here before, but the only remaining players from that roster are Tim, Tony, Manu and Matt Bonner, who played all of three minutes in the 2008 WCF and might be falling out of the rotation in this series. The Thunder have responded brilliantly to the danger of elimination so far and a lot of worry has been focused on whether players like Danny Green, Tiago Splitter and Bonner can be productive under all this pressure and against an opponent that has been countering the schemes that make them effective. I expect Pop to go with a shortened version of the Game 4 lineups: lots of Diaw with Leonard and Jackson getting most of the wing minutes. Bonner and Blair are a hot topic as usual but I don't think either will play much unless Duncan or Diaw gets in foul trouble.

This preview could run 500 pages, but in the interest of brevity and gimmicky formats I've settled on five points of articulation between the two teams based on what we've seen so far in the series.

Manu Ginobili has been limited to occasional dominance in this playoff run and with just 21 and 25 minutes in game 3 and 4 he's been unable to make the all-around impact that we expect from playoff Manu. As such it's up to Tony Parker and Tim Duncan to generate most of the offense and check OKC's best players. The increased workload has resulted in some inefficient numbers for the duo as they''ve been sharing 35 possessions a game. The offense that got us here starts with Parker and Duncan and the more danger they present the more opportunities for the three-point shooters.

Thabo Sefolosha has played, in order, 31, 15, 37 and 22 minutes in this series. Brooks has insisted on key minutes for Derek Fisher, and while the old man has had his moments, he doesn't have the defense of Sefolosha or the skill of Harden to justify leeching from their minutes. Fisher can hurt the Spurs with his play-making in small lineups but is certainly the guard we want to see on the court when both Tony and Manu are playing.

Obviously Ibaka isn't going to drop 26 on us on 11-11 shooting again, but what happened in game four was as much about a Spurs weakness and Ibaka finding his shot as it was fluky playoff randomness. All postseason the Spurs have welcomed big men to shoot the mid-range jumper and Ibaka can punish that with a surprisingly soft shot that has range comparable to Duncan's. In the regular season, Ibaka shot 46% from 16-23 feet, tied for fifth among power forwards on an above-average number of attempts. With Westbrook and Harden to defend the Spurs may have their poison picked for them and have to protect the paint as the number one priority.

#4 The roll to the basket

The Spurs thrive when they get their shots at the rim and at the three point line. A missing ingredient in that recipe is a threatening roll man to get some easy baskets and further collapse the defense. Zach Lowe compiled video and wrote about how the Thunder have started to realize which screens involve genuine threats towards the basket and when they have an opportunity to rush the ball-handler. Duncan and Diaw is not as specifically threatening in the roll to the basket as Duncan and Blair would be, and Splitter and Bonner was a regular season and early-round staple that got Tiago to the rim with frequency. However Duncan/Blair is weak on defense and Splitter and Bonner are both struggling in this series so it might be up to Diaw to be more than just a decoy in the screen game.

It might not mean anything at all, or it might point to a vulnerable bench, but the Spurs have struggled to score in OKC in the second quarter and are losing 2nd quarters 90-112 overall. The Thunder opened the second with a 17-5 run in game three and a 24-5 run in game four. This may not be the series to play ten or nine guys and more minutes for the versatile defenders like Jack and Manu might be in order to match-up while condensing the rotation. That's the strategy Scott Brooks will probably pursue, and while I have faith in Popovich to settle on the right strategy I'll be breathing easier if he goes with a similar approach. 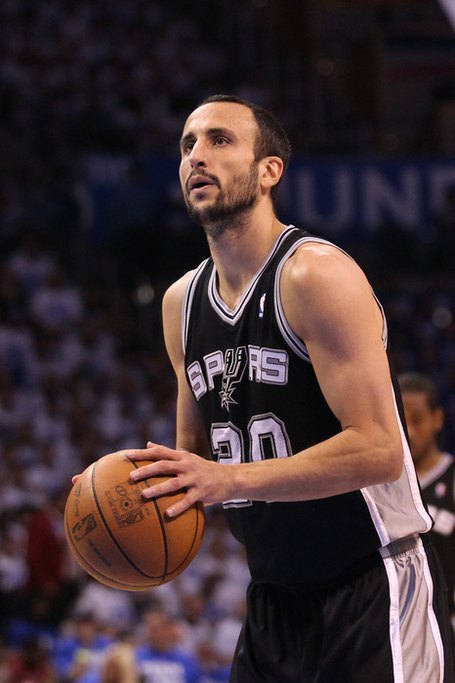 Game Prediction: I have no justifiable idea what's going to happen tonight, but my gut says the Spurs win a close one. All we can do is pay attention to what's happened so far and try and project it forward, and in this crazy series it's hard to reconcile the first two games with the more recent two. If you're throwing out the regular season and earlier rounds there's no prediction to make, just an opportunity to re-state which team you picked to begin with.

As always Tony must dominate Fisher, for real this time, and NBA league pass is recommended for those who are willing to pony up the cash. Almost every Spurs game will be broadcast there, which is especially helpful for those of us who aren't in the San Antonio area. Please don't post links to illegal game feeds in the game thread. Links to illegal feeds are not permitted on SBNation, but you can probably find them out there on the internets if you're resourceful and desperate.