Poker, Anna Kournikova and the Spurs

Share All sharing options for: Poker, Anna Kournikova and the Spurs

I enjoy playing poker. One of the more enjoyable things about poker, in my opinion, is all the crazy names people come up with for hands. A couple of random examples are a pair of 8's are called Snowmen (for obvious reasons) and a hand with three Kings is often referred to as The Wise Men, referencing the nativity story we often hear at Christmas. So you get the idea, many are clever, and others are just obvious and fun. My all time favorite nickname for a poker hand has got to be for the Ace/King pocket cards in Texas Hold 'Em. They call it The Anna Kournikova, because it looks great, but never wins.

Many of you will get that right away, but for those who don't follow tennis or sports pop culture, let me fill you in. Anna Kournikovia was a Russian tennis star. I use the term "star" very loosely here. She had talent and was also quite the looker. She got ranked as high as 16 in the WTA's World Rankings, but her popularity sky rocketed after a Sports Illustrated article and photo-shoot. Her fame took off, but her tennis game never left the ground. After making it reasonably deep into a few tournaments early in her career (thus the SI article), she never could or would get her game on par with her fame. She soon skipped the facade of even trying by retiring from tennis "due to injuries" and to "pursue" her other career opportunities. That consisted mostly being featured in a Enrique Iglesias music video or being caught dating different Russian hockey stars. She did a lot of "looking good", but actually did no winning...at all.

How you may be asking does this relate to the Spurs? I'm glad you asked.

The Phoenix Suns of the Mid-Oughts, or 2000's, were nothing if not a fun watch. They would slice almost any opponent in the famed 7 seconds or less offense. Steve Nash was a whirling dervish (I just looked that up, it didn't mean what I thought it did and it doesn't really apply here, but I'm using it anyway) of high octane passing while the likes of Amare Stoudemire, Shawn Marion and Boris Diaw were made to look like all-star world beaters. They were the hottest girl at the party - just ask the folks at ESPN back in the day. Of course we all knew how things went and where it was heading. They could look really good all they wanted to, but they didn't have the mentality or personnel to beat teams like the Spurs or Lakers.

Now let us look at the current incarnation of our beloved Spurs. Are they the same thing? Are they the current NBA equivalent to Anna Kournikova? They could be. They can score on or with anybody, but they are, at least, suspect on the defensive side of the ball. Two straight seasons with the top record in the West during the regular season: one early playoff exit and one deep run that ended in a 4 game losing streak. Many of us, myself included, wanted to believe that this Spurs team could play defense "when it mattered" and get the all important late game stops, but the fact of the matter is that they couldn't against a athletically superior team in OKC. 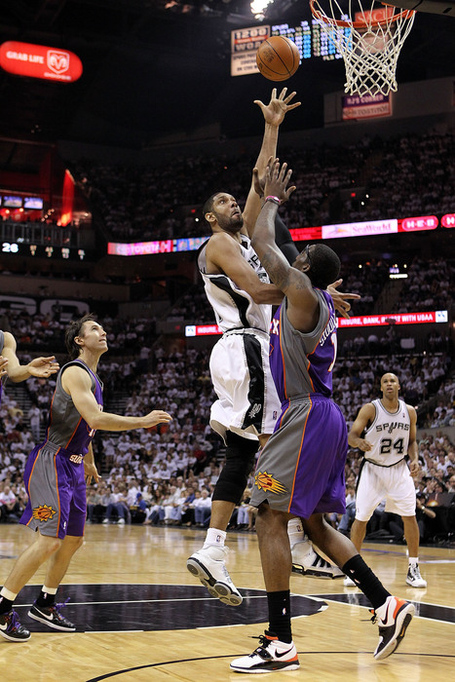 The Spurs in my estimation have become what the Suns were. They are very good, but they no longer have that elite defense that can help them get the stops necessary to win games against teams like OKC or even Miami. The Spurs do boast some very good defense wing players with Danny Green and Kawhi Leonard. They even have serviceable defensive wings in Manu Ginobili and Stephen Jackson. Our defense at the point guard spot is lacking, but it has been since Tony Parker weaseled his way into our Spurs heart. The biggest deficiency is the lack of quality defensive big men. When teams can get to the rim and there is nobody there to oppose them, even the best perimeter defenders are limited.

Tim Duncan is still a very good defensive big man. He isn't what he once was, which was an all-time great, but he's still got game. The issue is, he's really the only good big. The other Spurs bigs are all very limited in their role. Boris Diaw can guard the smaller more finesse guys and Tiago Splitter can bang with the low post players. DeJuan Blair can do something, but I forget what, and Matt Bonner proudly wears his winter shoes. Bottom line is, despite how well Diaw played for the Spurs, and he did play well, he isn't a great rebounder or shot blocker. Splitter has been a bit of a disappointment in his playing time. He's good against the likes of Pau Gasol and Andrew Bynum, but he can't keep up with Chris Bosh or Serge Ibaka. Worse yet, Splitter has yet to show that he can punish smaller guys on the offensive end making him even more limited.

Problem is there isn't an easy fix like "just get Dwight Howard". If guys like Splitter and Leonard can improve, it will do nothing but help this team, but I doubt that will be enough by itself. There likely isn't a quick fix in the draft, at least that the Spurs can get. I'm pretty doubtful if any of the Euro Stash will bring a significant improvement on the defensive side of the ball. So what can the Spurs do to improve? Likely they'll have to take a risk on a lower tier free agent or gamble in a draft day deal like they did last year. This team is still very good, and I think they are a player or two away from really getting back to being a very good defensive unit. Keep in mind, they don't need to become the defensive juggernauts they once were, they just need to get better. They just need to be able to get those vital stops against really good teams.

At this point the Spurs are holding an Ace/King, the Anna Kournikova. They're looking good, but can they find those cards to beat the stacked hands the Thunder and Heat are holding? I'm not sure, but let's be honest, winning sure beats having to be in anything with Enrique Iglesias or his former mole.