Share All sharing options for: The Foreign Market, Part I: European Draft Prospects 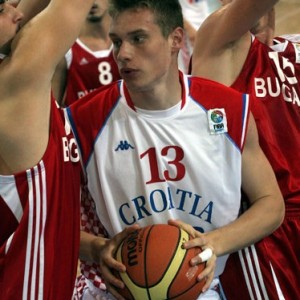 This is Leon. He must break you.

So, here we are in yet another offseason that came too soon. I can't speak for the rest of you, but the mourning period has finally ended for me, and I'm ready to talk offseason moves. As the guy who got the job of PtR's European basketball "expert" (a term used loosely, I assure you), it's my duty to guide the conversation about the Spurs' international prospects this offseason. In a later post, we'll talk about the team's options for free agent signings from overseas. But, with the draft coming up in two days, let's talk about some of the guys the Spurs might be looking at.

The Spurs currently possess only the 59th pick in this year's draft. With a pick that low, they typically will spend it on a draft-and-stash type of player. However, the Spurs are rumored to be interested in trading up this season, so I've included all the draft-eligible international prospects I could find in a list of likely candidates. Well, at least the ones with a more than a snowball's chance in Phoenix of being drafted. I'll be honest, I don't know much about most of these guys, but that's half the fun.

With that in mind, I'm drawing every name on this list from Draft Express's top 100 prospects list. I've seen a few of these guys play, but I'm relying on stats, highlights and reviews from both DX and some of the European guys at Spurstalk for the rest of my info. Without further adieu, here are your 2012 international draft prospects:

This 6'7" French wing is one of the best scorers at the position in the French LNB. Currently projected as a late first-round pick, he's a good slasher with the ability to create for himself and others. At 19 years old, he has plenty of time to add range to his shot, the only glaring hole in his offensive game.

Another Georgian combo forward with good size who seems to duplicate Sanikidze's skill set, with the exception of being less prolific on the boards. Currently predicted to be picked in the mid-second round.

I like this guy. He's a real jack-of-all-trades type, and at 6'8" he has good size for his natural position of SF. If you can imagine Danny Green 2 inches taller, that's basically who Papanikolau is. If the Spurs weren't already set for the foreseeable future at the wing, I'd be in favor of picking this guy up.

Here's a post player and rebounder at the PF position, who's only 20 years old. He did well in limited minutes with Euroleague newcomer Galatasaray this past season, and he has the potential to be a very good role player in the NBA one day. Right now, he's projected to be drafted in the mid-second round, well ahead of the Spurs' pick.

DX has been projecting the Spurs to draft this guy for quite some time. I think they may be wrong, but maybe they've heard something. The 6'9" big man plays for Milan (Malik Hairston's team) and has struggled to find minutes behind Ioannis Bourousis (remember him?) and Mason Rocca. As a 22-year old, he is automatically eligible for the draft, but if he doesn't get drafted he'll simply become a free agent as far as the NBA is concerned, which is why if he's still on the board with the second-to-last pick in the entire draft, I think the Spurs will look at a younger player. (more details below)

This 7'1" Bosnian spent most of last season in Spain's second-tier league, but recently signed with perennial Euroleague squad Unicaja, where he'll have the chance to prove himself at a high level of competition. He put up good numbers across the board at lower levels and could be a good risk, even though he reportedly doesn't want to be drafted.

This 6'3" point man is a ridiculously good shooter. He also boasts a great turnover-assist ratio, even though he's not known for his court vision. He just signed a new 3-year deal, and Greek players are somewhat notorious for not wanting to leave Greece, but I could see someone taking a chance on him.

Here's a 7'1" Turkish big man with ballhandling and shooting skills who has trouble getting minutes for a Eurocup team. Think of him as a less athletic Ryan Richards. Pass.

Here's the biggest draft-eligible prospect around. At 7'4", he's been putting up good numbers on a bad team. His sheer size makes him intriguing, but it's questionable whether he'd be able to keep up with today's NBA athletes.

A smart combo guard with great size (6'7"), Satoransky recently impressed at the Adidas Eurocamp. But after a lackluster ACB season, it's questionable whether he's really an NBA prospect. He doesn't really stand out in any one area of the game, but his ability to dominate opponents with superior size still makes him interesting.

This Frenchman has prototypical shooting guard size at 6'6" and seems inconsistent at best. But if any NBA team knows his game, it's the Spurs, since he happens to play for the team owned by one Tony Parker.

A 6'9" small forward who excels at rebounding, Karaman is pretty enigmatic at this point. Playing in the lower leagues of Europe will do that for you. He's a good shooter from inside the arc, but only shoots about 30% from the European 3-point line.

A 6'11" center with a great shooting percentage (68%) and so-so rebounding, Planinic might be worth a look. I know next to nothing about the Adriatic league, but I think this guy could be a dark horse pick for the Spurs, and he's auto-eligible for the draft this year.

This auto-eligible French point man is pretty good at scoring, distributing and getting steals. So, what's the problem, you ask? He's 5'10" - not exactly NBA size. Still, his speed could cause mismatches on the perimeter.

A 6'11" PF who's a decent rebounder but poor shooter. How someone can shoot 42% from a power position and still be on the top 100 prospects list is beyond me.

This 6'10" Center is the second-best shooter in the German league, but isn't exactly athletic. Nor does he possess the size needed to make up for that athleticism disadvantage, though his 7'3" wingspan helps.

This Spanish PG won't be drawing any comparisons to countryman Ricky Rubio any time soon, but like the next prospect on the list, he stayed in the draft despite being projected to not be drafted at all. I saw him play against Barca in one of Lorbek's games earlier this year. Poor shooter, decent passer... color me not impressed.

Here's my pick for the Spurs to draft at 59. This guy is 20 years old, a legit 7-footer who's not projected to be drafted at all, but declared for the draft and stayed in past the cutoff date anyway. This makes it sound like he has a promise, and since the Spurs are well-known for their European scouting, as well as their penchant for taking players that aren't projected to be drafted (Hanga, anyone?), I suspect the big Bosnian could be their target.

So that's it. Knowing the Spurs, they could go for some other Euro not even on this list. But if they pull the classic draft-and-stash strategy, there's a pretty good chance their pick comes from this list.