The Players Might Change, but the Roles Should Stay the Same

Avoiding the Trap of Orthodoxy

Now that the season is over, we are all looking at the future, trying to figure out what went wrong, but most importantly, how can it be fixed. I don't believe the Spurs are going to suffer a steep decline next season, but the continued excellence of the Thunder and the emergence of young or retooled teams won't make things any easier.

Like every year, there is talk of blowing it up, but I believe that we will only see some minor changes going into next season. What I'm terrified of is PATFO panicking and forgetting that creative, progressive thinking is what brought the Spurs here and going back to a more traditional approach.

For most of Duncan's run, the Spurs employed highly specialized role players. During the glory days, it was mostly defensive-minded guys (Nesterovic, Oberto, Bowen, etc) which resulted in a slow-paced team with smothering defense and just enough offense to get things done. As Duncan's skills and dependability in the post eroded and the league became more perimeter-friendly, the team adapted by bringing in offensive-minded players (Neal, Bonner, Mason, etc.), better suited for a free flowing offense predicated on movement, spacing and shooting.

Looking at the success the Spurs had when they were a defensive juggernaut and the disappointments of varying degrees with their new-found offensive identity, it's very tempting to say that the Spurs should revert back to trying to win with defense. Unfortunately, that would be overlooking the fact that the team is more than a couple decent defensive role players away from that goal.

I don't need to tell you this, but Tim Duncan was a defensive beast in his prime, an all time great game-changer who was strong enough to guard the post, tall and athletic enough to contest every shot, and agile enough to defend the pick and roll. Today's Tim is still a great defensive player, but his body has changed and so have his abilities. He can still check players in the post, but he can't shut down the better post scorer on his own since he had to slim down to preserve his knees. He gets blocks without jumping because of his timing, but can't play above the rim and might be a little late to rotate at times because of his diminished speed, which doesn't do him any favors when defending the pick and roll, either.

While Manu and Tony were never elite defensive players like Tim, they didn't have to be. The Spurs had one of the best defensive wings in the history of the league in Bruce Bowen and the era of speedy point guards wasn't as established as it is now. The other contenders at the time employed Derek Fisher, Steve Nash, Chauncey Billups and Jason Kidd. The first time the Spurs faced a speedy PG in the Parker mold in Devin Harris, they suffered mightily to contain him. 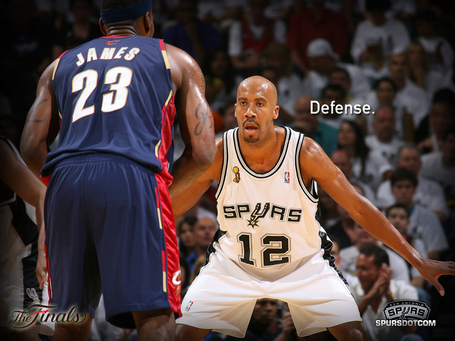 Unless Pop has a time machine, the good old days of defensive dominance are far gone

Basically, the game changed and so did the Spurs' stars ability to play defense. After guys like Oberto, Kurt Thomas and Bowen himself couldn't keep the team a contender and after the failed Udoka, Bogans and Rattliff experiments, Pop changed his philosophy.

The Spurs got creative and changed their whole approach, looking for players that could score and make life easier for the stars. Instead of employing a traditional back up point guard that needs the ball in his hands, they got sweet-shooting combo guards (Hill, Neal), which allowed Manu the freedom to run the second unit. Instead of finding defensive centers to flank Duncan, they got him jump shooting bigs (Bonner, Dice, Diaw) to take pressure off him on offense or attempted to go small. And instead of using highly specialized offensive or defensive wings, they went for players with a more well rounded game (Leonard, Green, Jackson). All those moves paid off to some degree and allowed the Spurs to continue to enjoy success both in the regular season and the playoffs.

The only recent move that backfired? The Spurs trying to be orthodox and getting a prolific, high-usage wing scorer to attempt to match the firepower of other teams. Richard Jefferson was the Spurs' attempt to keep up with the league instead of continuing to do what they did best: find good role players that work in their schemes.

Now, after falling to the Thunder, a lot of voices are asking for heads to roll, but more worrisome than that is the, perhaps inadvertent, yearn for a return to orthodoxy that in my eyes would doom the Spurs.

Even some of the brightest of Spurs fans want a defensive big and a "real" point guard. Is that predicated on something observed throughout the playoffs or on what we might think a championship caliber roster looks like? It wasn't the lack of an interior defender that killed the Spurs. In fact, the Thunder went small quite a bit and their interior players are not offensively gifted. Splitter, the Spurs other defensive big, played only 53 minutes in the whole series of the available 288 and OKC outscored the Spurs by a wide margin in that time. In those very limited minutes, though, the Thunder shot only slightly better than usual in the paint but absolutely torched the Spurs from the corner and mid-range. Hardly something a better defensive center can prevent on his own. At the opposite range of the spectrum we have Boris Diaw. The team was much better with the French forward on the court. Is Diaw a prototypical defensive big? 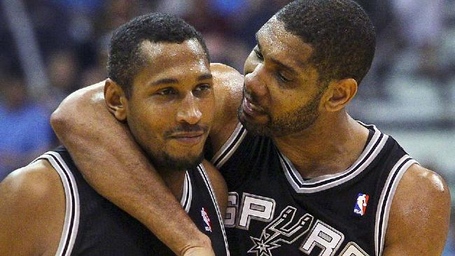 The Spurs bigs on the whole did an OK job defensively on their counterparts, but it was on offense that they struggled the most. Duncan is not automatic from the left post anymore and the Thunder did a fantastic job containing the Bonner-Splitter combo. Diaw is not a natural scorer but did a decent job of exploiting the cracks in the defense. Overall though, our bigs didn't make a big enough impact on offense, which made the team dependant on outside shooting and perimeter defense that was not up to par. How is a rim-protecting, post defending 7-footer going to help there?

As for back up point guard, I addressed this before, but Gary Neal does a solid job of complementing Manu's playmaking with great shooting and can work as a secondary creator on the pick and roll in a pinch. He might not look like a point guard and occasionally struggles to get the ball up court against pressure defense, but he does what the Spurs need of a PG: doesn't turn it over too much and can hit the outside shot. In the playoffs, Neal's turnover percentage is much, much better than that of all the other guards and wings on the team and he shot a very good .444 from 3. His assists percentage wasn't stellar, but when you have Manu, a shooting guard that assists his teammates in 23% of their shots when on the floor, you don't need that much from Neal. That being said, the Thunder outscored the Spurs pretty badly when Neal was on the court, relying mostly on mid-range jumpers. Considering Neal turned the ball over only 3 times in the entire Thunder series, was it Gary's ball handling and passing skills that hurt the team or was it being a part of a pretty flawed defensive second unit?

As I see it, the Spurs were not eliminated because the roles on the team were not the correct ones or some of the type of players they used were not conducive to success. No, the players that filled those roles didn't show up when it counted, the coaching staff failed to give them enough time to play through their mistakes, or a combination of the two. Throughout the season and for the first 10 games of the playoffs, the Spurs thrived because of their unorthodox approach of spacing bigs, shooting combo guards and high efficiency-low-usage wings, not in spite of it. If the Spurs want to get new players, the motivation should be finding ones that fill those roles better, not returning to archaic positional structure that don't fit the current play style of their stars.