Maybe I'm wrong, but I think the majority of the Silver and Black faithful didn't expect Stephen Jackson to perform quite as well as he did. We certainly expected him to defend with toughness and nail a few big shots; he did that much and then some. He went from "additional SG-SF depth" to "top seven in an elimination game" in no time flat. It was an amazing performance by the Cap'n, and he'll be back - at least, we're all hop'n.

If this guy could do so much for a contender in such a short span of time, what could he do with a training camp and a full season to work with? Or, more poignantly, what would he have done with that same contender for the past nine years?

What-if games are usually fraught with unrealistic, best-case scenarios. But what would the history books look like if Stephen Jackson had stayed put? Sure, maybe he doesn't knock down threes to the tune of 75% in the playoffs for nine years running, but in the 2003 offseason he was a known quantity. He had shown himself on a championship team. The two-time reigning MVP sung his praises. The city loved his gumption, his fire, his willingness to take the big shot. And, confound it all, he left it all behind. For Atlanta. In a particularly dreadful year, even by Hawks standards. And he did it for less than 1/3 the salary the Spurs had offered him to return.

For their second crack at a title defense, the 2004 Spurs had some roster spots to fill. Granted, most of the departed Spurs didn't see a lot of floor time in 2003 (Danny Ferry, Steve Kerr, Steve Smith), but David Robinson's leadership and defensive prowess were going to be sorely missed. There was no easy replacement for a player like the Admiral, but the Spurs did an fine job replacing Cap'n Jack. For Danny Ferry's expiring contract, the Spurs received the heralded Hedo Turkoglu and the once-promising Ron Mercer in return. Mercer, despite drawing a higher salary than every Spur not named Tim Duncan, didn't pan out - but Turkoglu proved to be more than an adequate replacement for Port Arthur's own. In 2004, Turkoglu finished fifth on the club with 6.7 Win Shares despite finishing sixth on the club in minutes played, with 2073. In 2003, Stephen Jackson was sixth on the club with 4.8 Win Shares, despite placing fourth on the minutes played list with 2254. Comparing the two seasons, it seemed like the Spurs had solved their Stephen Jackson problem and then some. 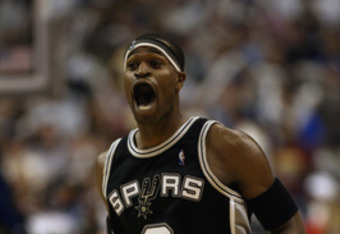 Then came the playoffs. When the going got tough, the Turk got choking, and the Cap'n got balling. The advance stats showed that Jackson's offensive game took a bit of a hit despite his heroic clutch shooting, but his defensive work was superb - he was second only to Tim in Defensive Win Shares for the 2003 champs. But in 2004, there wasn't a single metric one could point to that didn't show that Hedo Turkoglu didn't dramatically underperform in the playoffs. Which begs the question: with Stephen Jackson in Hedo Turkoglu's place, would the Spurs have followed the Lakers three-peat with one of their own?

To help answer this question, let's turn to a couple of Round Two Game Fives. They were played in the AT&T Center played against the Lakers on May 13th: the first in 2003, the second in 2004. Both playoff series saw the Spurs go ahead 2-0 and the Lakers strike back to tie the series. Your 2003 starters: David Robinson, Tim Duncan, Bruce Bowen, Stephen Jackson, and Tony Parker. Your 2004 Starters: Rasho Nesterovic, Tim Duncan, Bruce Bowen, Hedo Turkoglu, and Tony Parker.

This might suggest that these players were basically interchangeable, but consider the following:

Of course, one could dissect these things in a variety of ways. The larger point here is that in what was effectively a Jackson-for-Turkoglu swap, the Spurs came up short in the deal despite Turkoglu's apparent advantages over Jackson. Although younger AND more experienced than Jack, Turkoglu failed to contribute effectively in the playoffs in his first year as a Spurs starter.

With all that in mind, does anyone think that Stephen Jackson gives the Spurs more or less what Turkoglu did? Or, with two years in the system and a championship already under his belt, does Stephen Jackson raise his game in the 2004 playoffs and help the Spurs vanquish the Lakers again? San Antonio and Atlanta were worlds apart in the standings in 2004, but as one of the few bright spots on a terrible team, and by extension a marked man, Jackson had a very effective season on an individual basis. In nearly 800 more minutes than he played in San Antonio, most of his statistical ratings were about the same except his turnover rate. It dipped significantly. On the Hawks, his was third-lowest in turnover rate and first in usage. All in all, it was a fine season on a bad ballclub.

I don't want to rehash all of this again for 2006. With the Great Collapse of 2012 fresh in our minds, I hate to recount that one year. You know, the one where Gregg Popovich backed up Tony Parker with a distance-shooting defensive liability in the playoffs and refused to use any of the size on his bench. Oh, but 2006 was way different than 2012. Gary Neal is right-handed.

But I have to ask: if the Cap'n was still around in 2006 and we face the Dallas Mavericks again, would things have turned out different? If 2007 is any indication, yes. When the Golden State Warriors mattered for that nanosecond in history, they shocked the world due in no small part to their defense on all-world scorer Dirk Nowitzki. The league MVP scored 24.6 PPG during the season while pulling off the rare 50/40/90 (50% FG, 40% 3FG, 90% FT). In holding Nowitzki nearly five points under his season scoring average, the Warriors hassled Dirk into a rare-but-for-the-wrong-reason 38/21/84 line. And Stephen Jackson was the first line of defense against the German scoring machine. I don't know that Jackson would have had that kind of defensive success for an entire series against Nowitzki, but is it likely that Jackson slows Dirk's roll enough to tip a seven-game set back in the Spurs' direction? With Cap'n Jack and Bruce Bowen tag-teaming Nowitzki, I have to believe Nowitzki would have had a tougher time getting his. In a seven-game series featuring many close games (games one and three through six went plus two to the Spurs in total score, and game seven was an overtime contest), Jackson might have made the difference.

Let's not drag this out. Nine years is a long time, and there were any number of ways that all of these contests could have gone. It's certainly not a done deal that the Spurs have missed out on championships because Stephen Jackson was gone. But in those dreaded even years of 2004 and 2006, the line separating victory and defeat was even thinner, much thinner, than it usually is. And with a proven playoff performer in the fold, a versatile, intense, passionate performer with dogged defensive determination and a willingness to take the big shot, the Spurs might have ended up on the other side of that hair-thin line. Like I said before, what-if scenarios are fraught with wishful thinking, and what I've put forth here may be nothing more than that. I may not be able to see that I'm guilty of it myself. But based on how history transpired, was a five-peat (2003-07) really so far away, if not for some bad advice from an agent?

But life happened and, better late than never again, Stephen Jackson was fearlessly launching threes and bodying up the greatest scorer in the world. And he did it wearing the Silver and Black. Watching him do everything in his power to keep the Spurs alive reminded us all that what might have been isn't always so abstract.