Share All sharing options for: Morning Rehash: Spurs Get Paddled by Thunder

Nothing quite as invigorating as picking your teeth up the morning after a beat down. It's only one loss but it was an embarrassing one. Get your frustrations out, Spurs fans - and run through a condensed road edition of the Morning Rehash.

If you haven't read Fred Silva's recap of last night's game, you'd be better off doing that now before reading any further.

Some people are superstitious whether by choice or through conditioning. I've found that a large number of these people are sports fans. I find myself in this grouping but it took me awhile to figure some of it out:

And You know what all of this does? Not a @#$! thing. I don't do any of that nonsense at the AT&T Center and I haven't been in attendance for a loss there since last year's playoffs. Yet I still find myself sucked into all of this voodoo, ritualistic habits.
Anyways, I'm buying a French wine next time. Lets look at some brief thoughts from last night's thrashing game.

I made light fun of Coach Brooks pre-game talk about "play better" and how it seemed painfully obvious and dry. But it seems his young team took it to heart and would accept nothing less than a vicious, unadulterated victory. For the first time in what feels like forever, the San Antonio Spurs looked shell shocked on the court. The Oklahoma City Thunder played a great game, some of their best basketball of the post-season, and we all knew it was coming. So did the Spurs. When facing the possibility of a 0-3 death sentence, most playoff teams will fire every cannon they have in the arsenal. Sometimes the effort just isn't good enough (Clippers) but sometimes, as it did last night, it just levels the competition to the ground.

Despite a strong San Antonio response after the Thunders' opening 0-8 statement, the Spurs just couldn't keep it together. They looked disorganized and lethargic which is what a blitzkrieg attack like the Thunders' (and the Spurs) can do to a team. With acting and reacting, the latter is always the slowest. The Spurs were reacting to the Thunder, rarely taking the action to them.
For long stretches, there was little to no communication on the floor. The defense was slow on rotations and half a court away when the Thunder possession found the open shooters. San Antonio was also very lazy on the glass at times, watching the ball instead of boxing out and attacking the ball.

Some people might be wondering where the heads of some of the Spurs' young players might have been last night - I have the answer.

That attitude is why I like the Spurs' chance to get to 22, then 26. It's the same take-care-of-business approach that permeated a brief locker room conversation between Leonard and Gary Neal as they dressed following the game.

First of all, the conversation was between Kawhi Leonard and Danny Green, not Neal. I know this because I was closer to the conversation than Adande was and I pay special attention to open chats between players. Secondly, the true context of all of this was missing. There was a wisp of arrogance in Green's comment which was followed by an unexpected (but also somehow also expected) response from Kawhi Leonard. Green then continued to talk about looking forward to a "real vacation" without any of the additional summer work in between seasons.

When I heard it, I didn't think that exchange between the young starting guards boded well for the Spurs. And it was all I could think about when I watched the duo go a combined 2-6 FG for 5 points while letting their assignments absolutely humiliate them. They didn't declare themselves champions or directly insult the Thunder but their minds were not on Game 3 and definitely not on the impending, and obvious, OKC fury to come.

Hopefully now, their mouths are shut and their brains finally back with them in Oklahoma. 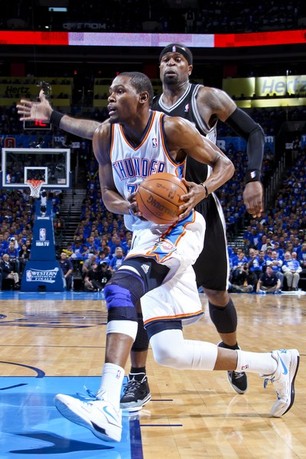 This Thing Was Over...

...with 7:59 remaining in the 3rd quarter (17 PT Thunder lead). San Antonio was slow on both ends of the court and reacting two steps slow to every Thunder action.

Thabo's length and hustle on defense and the boards was killing the Spurs at every turn. Didn't hurt that he was wide-freaking-open on nearly every 3PT attempt. Expect Thabo's defense on Tony the entire game on Saturday.

I don't care if he became the all-time leading blocker in playoff history. Tim Duncan was just awful on every spot on the court. If there is any good to come out of this, its that Tim is likely going to take a few scalps on Saturday night. The man has pride.

Thabocating - Like suffocating except the trauma is from a neutral country.

@Mos_Heff: There is only one person to blame for this loss...Richard Jefferson.

@CoachGodwin: POP made his starters watch this blow out.

@dailythunder: I'm kind of afraid DeJuan Blair is going to remind Pop that he absolutely destroys the Thunder in these next four minutes. 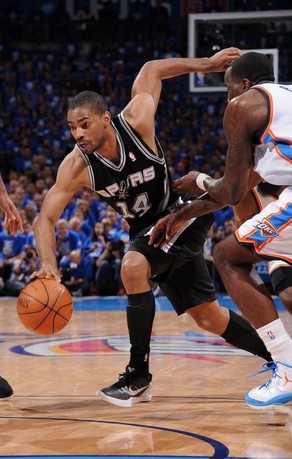 Show of hands - How many of you wanted Gary Neal banished to the Phantom Zone after this one?

Forget game 3. No doubt the Oklahoma City Thunder are a great team but this is was one of the worst losses the Spurs have suffered all year... and by a team they've dominated in recent years. San Antonio fought back early but they allowed themselves to be completely taken out of their own offensive element. In essence - they quit.

Flush the memory and go out there and play your game, Spurs - shove it down OKC's throat if you have to. Spurs also need to light a fire on defense. Too many poor decisions and rookie-grade mental errors.

Don't react - go out there an set the action. Fight for the 50/50 balls and play with an edge. Get in the Thunders' face and remind them of what this team can do.

Note: J.R. Wilco will be taking over the Morning Rehash for Game 4. Looking forward to it.