Anyone who has followed the Spurs knows that they use a pick and roll heavy offense, utilizing both Manu Ginobili and Tony Parker as ball handlers. We've already seen how Tony uses the P&R and now it's time to look at the way Manu Ginobili keys the Spurs offense's pet play .

Manu is probably the best shooting guard in the league as a pick and roll ball handler because he can both score himself or assist the screener, and he does each in a variety of ways. Right now I'll simply focus on Manu's passing using his destruction of the Utah Jazz as an example. To show Ginobili's versatility, I chose P&R sets featuring three different big men as screeners: Tim Duncan, Tiago Splitter and DeJuan Blair. 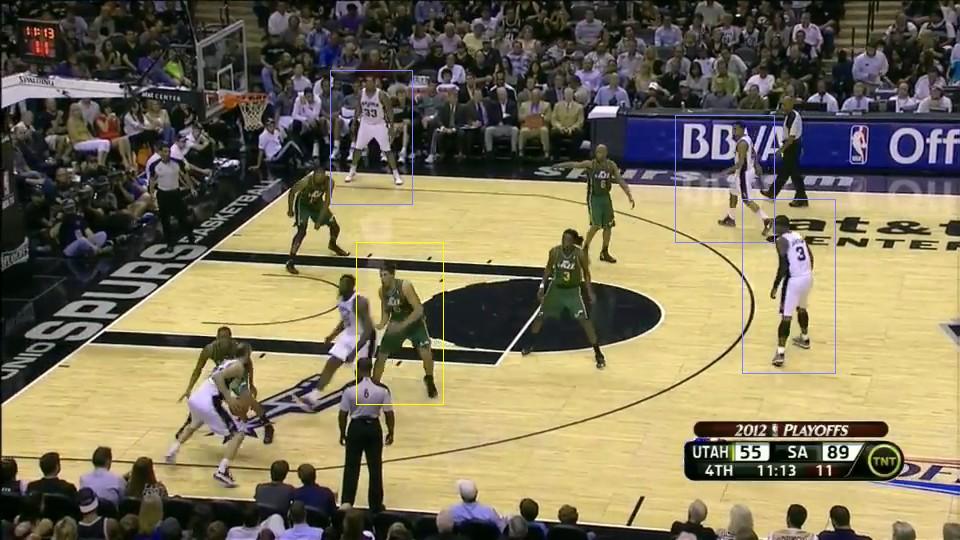 The play starts with Manu on the left corner. DeJuan Blair comes over to set a screen. Alec Burks and Enes Kanter are defending the play. The key to this play working is proper spacing. Boris Diaw is drawing Paul Millsap away from the paint, while Stephen Jackson and Patrick Mills have Demarre Carroll and Jamaal Tinsley on them, respectively. When they shared the court in the past, DeJuan and Manu used to run a lot of P&R sets starting on the side instead of the top of the arc. 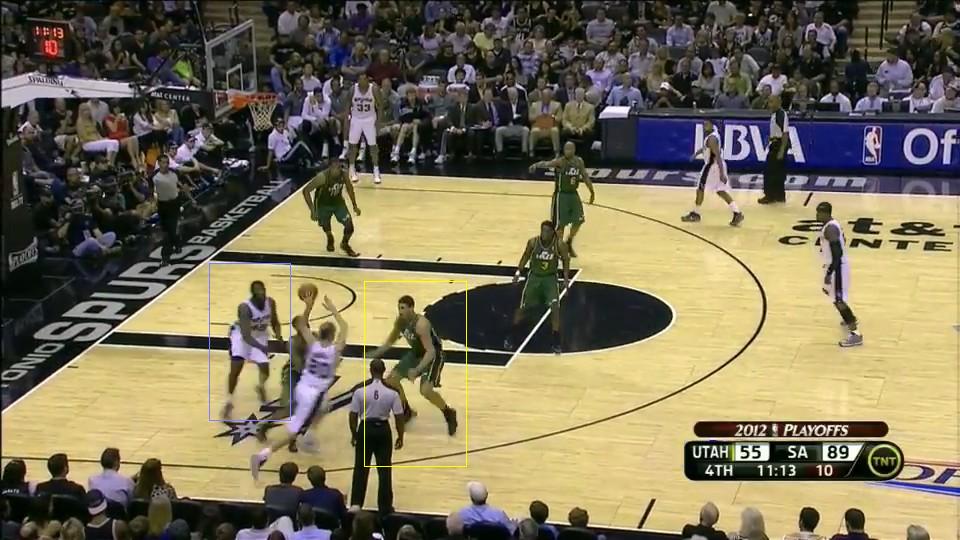 DeJuan appears to set the screen to free Manu going to the right but then does what he prefers to do: slip the screen. Kanter decides to hedge, and stop Manu's potential drive to the basket while Burks recovers. It's not a particularly good decision since Manu wouldn't have had a good angle to penetrate from that direction, not to mention that he's not as comfortable going to his right. Instead Manu sees an angle to hit the rolling Blair with a pass. 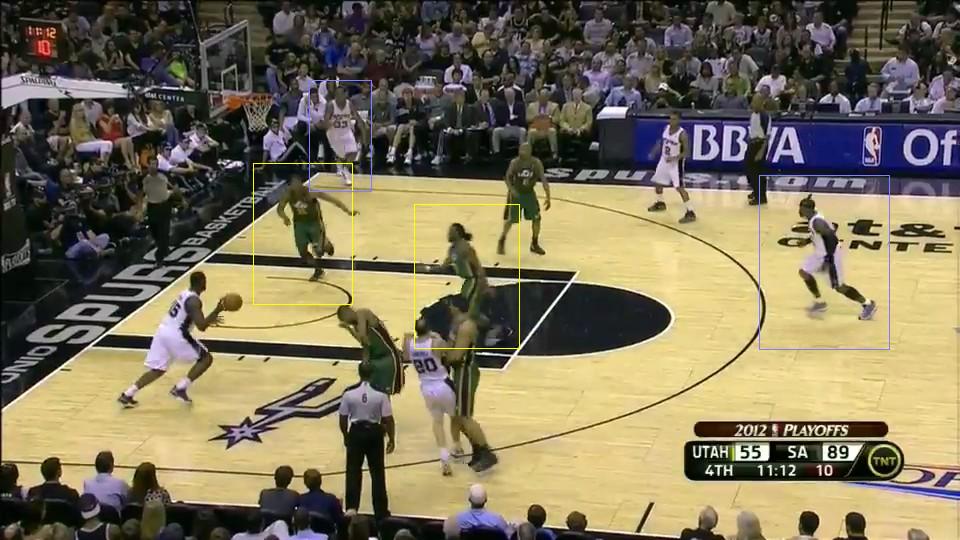 And that's what he does. Blair's slipping the screen usually doesn't work this well with Tony, who prefers a good screen that allows him to explore his scoring opportunities, but Manu is more likely to react to opportunities the screener's actions present. DeJuan is open and can go to the basket or wait for the defense to scramble and make the extra pass. Both Jackson and Diaw are cutting to the basket as soon as DeJuan catches the ball. He passes to Jackson who gets to the rim, but can't finish.

Tiago sets an early screen, Manu uses his length to lob the ball over the defenders 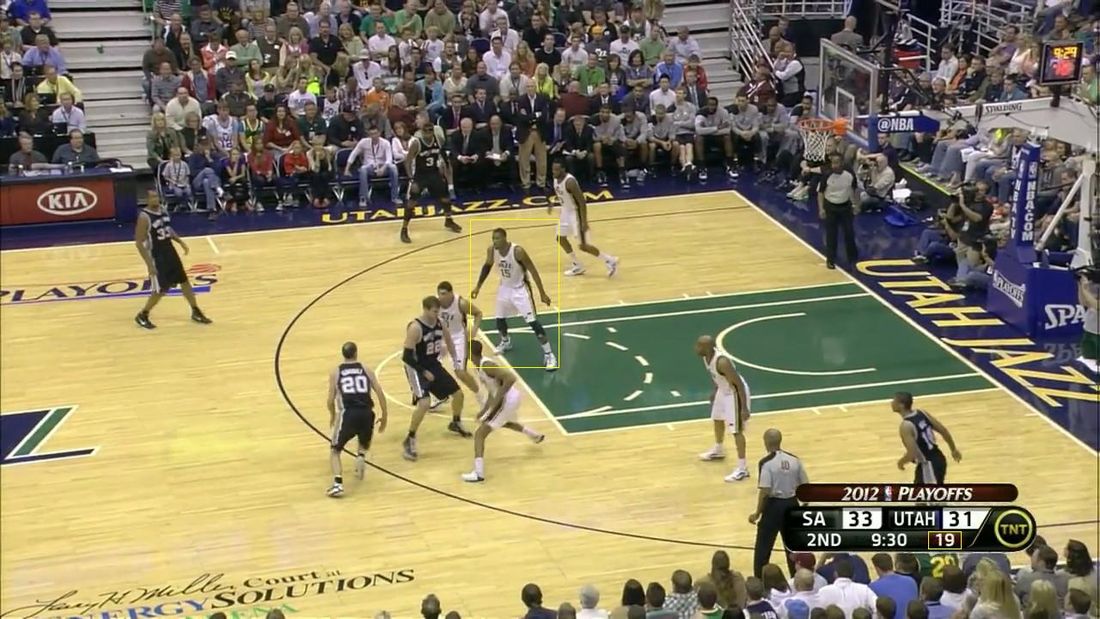 In this play Splitter does something I've seen him do a lot. He sets the pick before the defense is completely set. You can't see it but the shot clock is at 19 seconds. Diaw, Neal and Jackson are spacing the floor. Kanter and Burks are the primary defenders but Manu attacking the plodding Kanter with his strong hand worries Favors enough to have him focused on getting in position to stop the penetration. Not a bad decision considering Diaw is an inconsistent 3-point shooter. 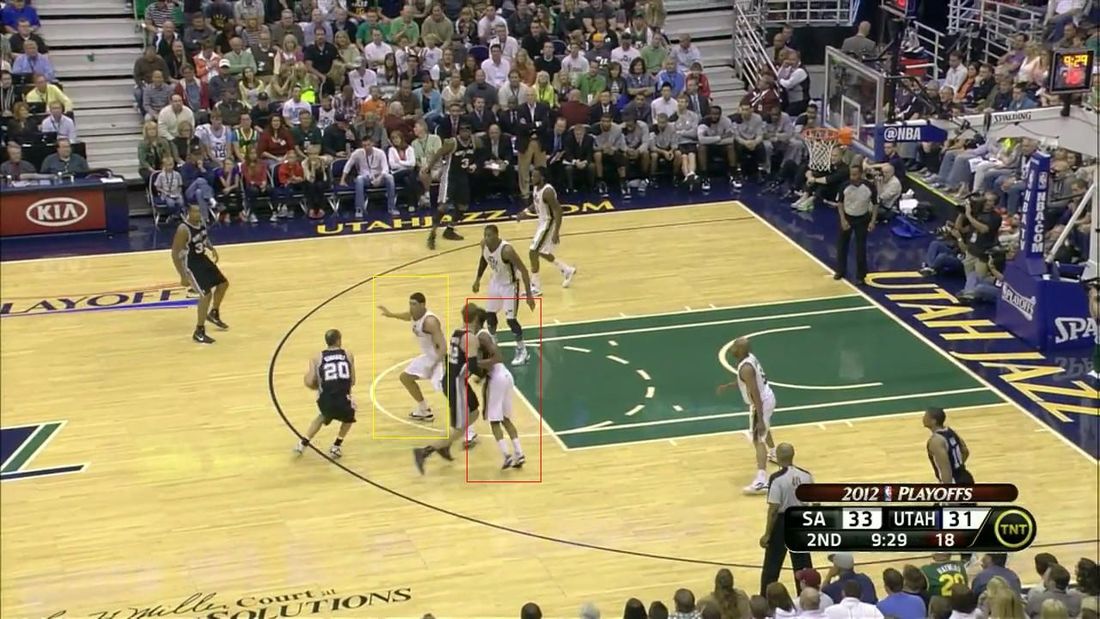 Kanter defends the play well here, showing hard to deter penetration and to bother a potential shot. But Splitter's screen is good enough that Burks is caught for a second before he can recover. Tiago is starting to roll to the basket with Burks smartly bumping him to slow him down before recovering to Manu. With both Jazz players on him, Manu should have a hard time finding an angle to pass to Tiago. 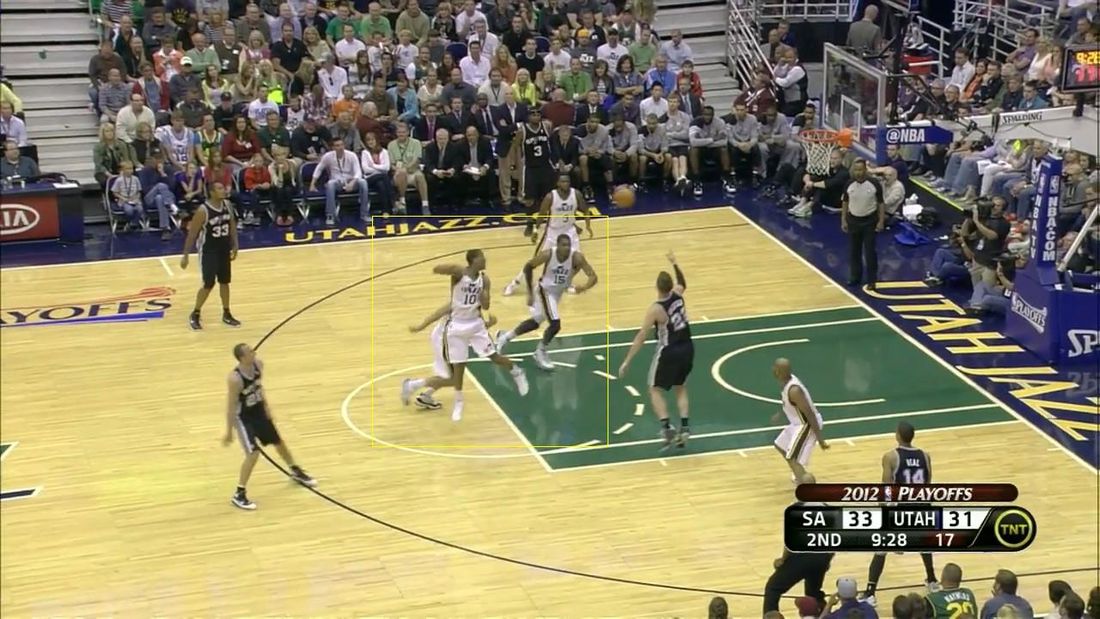 When Burks leaves Splitter to go back to Manu, Ginobili simply lobs the ball over the defenders to an open Splitter. This is possible because of two things: 1) Manu is tall and can both see the floor and pass the ball from a height a traditional PG couldn't, and 2) The Spurs' spacing. You'll notice that the two Jazz players that are not involved in the play are guarding players parked beyond the three point land which makes it hard for them to help after the pass is made. The Spurs are making Utah's players cover a lot of ground when they rotate to help. The Jazz were so concerned with Manu penetrating with his strong hand that three players tried to stop it, leaving a lot of space for Splitter to attack. Tiago gets the ball and lays it in before Favors can help.

Tim and Manu expose Jefferson on the pick and roll 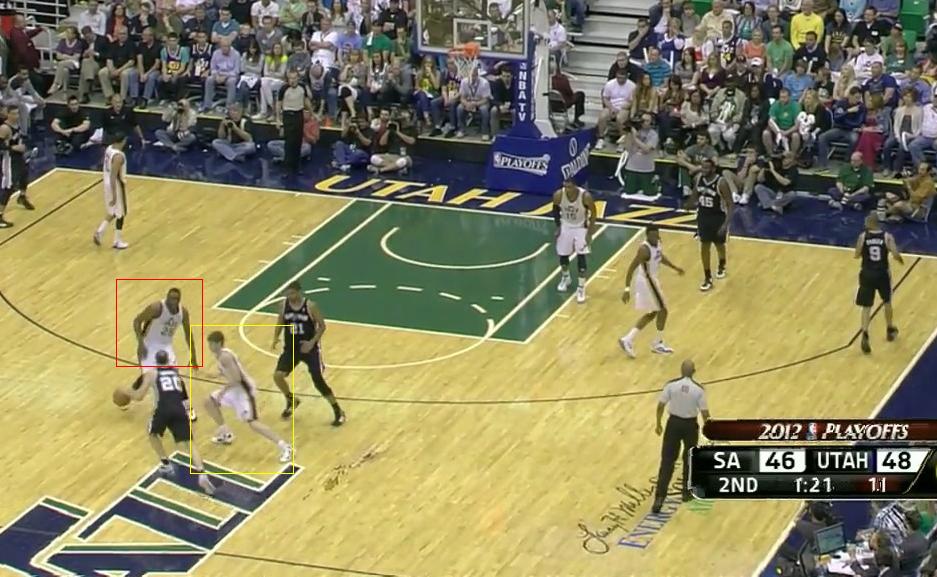 Here we have the classic 2-5 high P&R play the Spurs love to run with Manu. Most centers are too slow to guard anyone that far from the basket, but they're still forced to show because Manu can pull up from 3 or drive at full speed once his man is caught by the pick. This play is difficult to defend for just about any center, but particularly for Jefferson, who is really quite poor defending pick and rolls. Big Al does everything wrong here. Before Hayward gets caught on the screen, Jefferson is already showing really far from the basket leaving Duncan a clear path to the rim. 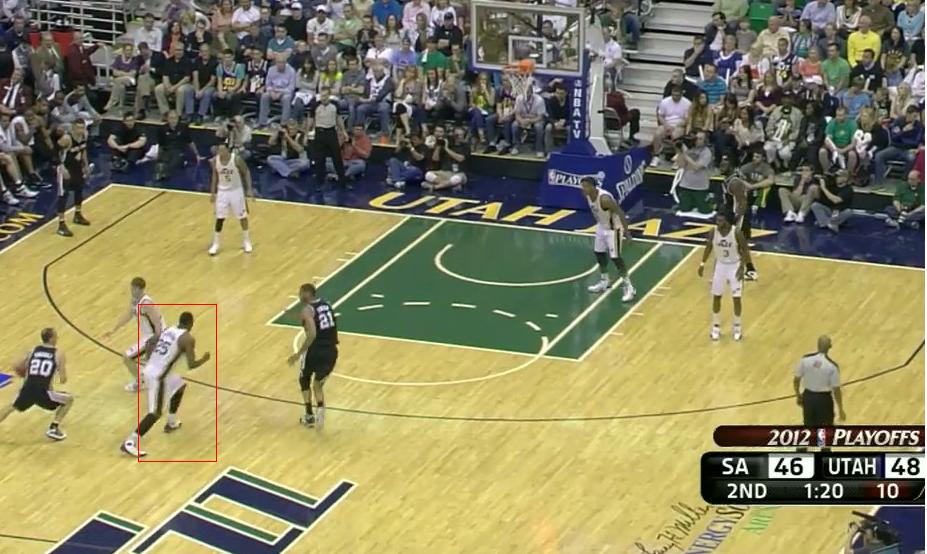 Without even setting the screen, the Spurs got Jefferson to commit to Manu. Tim already has a couple of steps on Jefferson, who is simply too slow to recover. Had Jefferson stayed with Manu and attempted to trap him (something he did in the game 4), Manu would have probably had to pick up his dribble or at least had a tougher time finding Tim, but Al just turns around looking for Duncan instead. 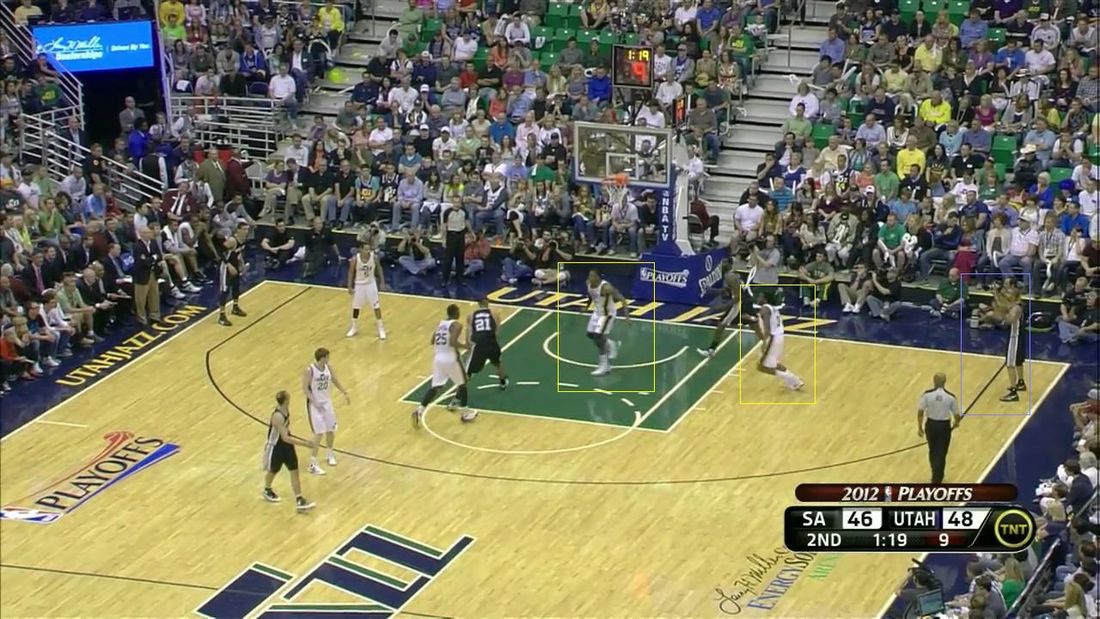 The gap between Hayward and Jefferson is so big that Manu just throws a regular pass instead of a lob or a bounce pass. Duncan catches the ball and goes to the basket with Jefferson trailing him. Blair's man, Favors, jumps to help and Parker's man, Harris, rotates to cover DeJuan. Duncan simply takes it to the hole using the momentum he has on Favors to lay it in, getting fouled in the process for the And-1. The Spurs relentlessly attacked Jefferson with pick and rolls all series long, and it's easy to see why.

Finally, these plays demonstrate how Manu got ten assists in game 3, and how he is such a threat, even when his shot is not falling. He uses his court vision, length and chemistry with the bigs to find them at the right time in the pick and roll. While I would like to see Manu looking for his own shot a little more in the semis, it's unquestionable that he can hurt teams with this passing as much as his scoring. As long as the spacing is there, expect Manu to keep racking up assists and making defenses pay for any lapses while defending the pick and roll regardless of who the Spurs end up facing.