Well here we are, pounders. Do you recall all the naysayers at the end of the regular season saying "Remember what happened when the Spurs were the top seed last year?". Yeah, neither do I. And those people sure shut up in a hurry - I wonder what happened to make them change their mind? Oh wait, that's right, the Spurs have thoroughly dominated this series, and look like every bit the juggernaut we know them to be. Every game has been a double digit win, including when they took Utah's best punch two nights ago and still put them away in the second half.

Let's start this off with some tunes.

Instead of talking more about the Spurs' statistical dominance of the postseason(It really is quite impressive), I'm going to give you all a lame personal anecdote about my personal experience with the Spurs against the Jazz.

On my 4th birthday, my dad took me to my very first Spurs home game at Hemisfair Arena. The opponent that night, fittingly, was the Utah Jazz. Seeing as the Gervin era had ended, and the Robinson era was still a few years away, the Spurs were not the better team that night. 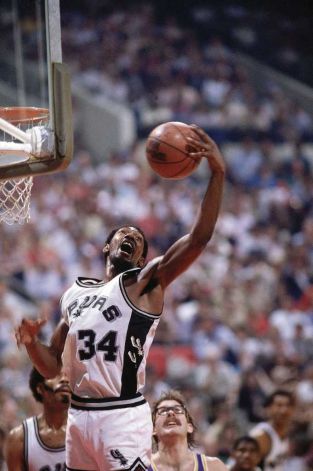 I have to admit, after seeing my favorite team get dominated over the final three quarters by the likes of Adrian Dantley and a young(but still dirty!) John Stockton, you can probably forgive me for hating the Jazz for the next 12 years. Over that time frame, the Jazz repeatedly stood in the Spurs way(including one Tim Duncan's rookie season), and I didn't yet truly understand the way basketball works. All I knew is that Stockton(and, to a lesser extent, Malone) were always giving cheap shots, and the Jazz would always bully their way past the Spurs. They were enemy number one in my mind for the longest time - "anyone but the Lakers" used to be "anyone but the Jazz" for me.

As I grew older and started to gain a better understanding of the game, I learned to appreciate what the Jazz did well, and the fact that they cared more about substance and results than they did about style. I learned to love crazy old Jerry Sloan for never compromising, and I even came to appreciate Karl Malone(never Stockton though - hate that guy). I was sad to see Sloan go, but happy to see that they're still not compromising their identity. The Jazz are just as Sloan-y as they were when Sloan was still the head honcho, and I happen to think that's good for the NBA. They also have one hell of a bright future.

But that bright future is still at least a year away, because the Jazz ran into a buzzsaw in the form of the 2011-12 San Antonio Spurs. They gave it a great effort the other night, but the Spurs absorbed their best shot and ran away with the victory for a commanding 3-0 lead. The Jazz know the odds against them, and as such, I don't think they'll put up as much of a fight tonight.

As always, Tony must dominate Fisher, and NBA league pass is recommended for those who are willing to pony up the cash. Almost every Spurs game will be broadcast there, which is especially helpful for those of us who aren't in the San Antonio area. Please don't post links to illegal game feeds in the game thread. Links to illegal feeds are not permitted on SBNation, but you can probably find them out there on the internets if you're resourceful and desperate.