The Spurs enter tonight's game with a 2-0 series lead, sky-high confidence, and all the momentum. It's a good thing because Utah is never hospitable to visitors. We can count on watching the most physical game of the series thus far. Since Utah was able to get away with rough play in San Antonio, we should expect them to get away with everything tonight in Salt Lake City. That's fine though. The Spurs will be ready to take full control of this series.

Before this series began, I thought boards were going to be the critical statistic. I didn't think the Spurs needed to out-rebound the Jazz to win, I just thought they couldn't allow them to dominate. In Game 1, they lost the battle 45 to 39 but managed to pull away in the fourth. In Game 2, they won 44 to 43 and cruised to victory. I understand it can't be as simple as studying one line on the stat sheet, but do pay attention to the battle on the boards in Game 3. If they're holding their own, the Jazz will be in trouble.

During the regular season, the top three Jazz players in PER (Player Efficiency Rating: a measure of per minute production standardized such that the league average is 15) were Al Jefferson, Paul Millsap, and Derrick Favors registering PERs of 22.8, 21.8, and 17.1, respectively. In their first two playoff games against the Spurs, they have PERs of 14.0, 13.9, and 15.3, respectively. I think the majority of the credit needs to fall on Boris Diaw.

Before Diaw joined San Antonio, Tim Duncan was alone defending the paint and controlling the boards. He was on a desert island and DeJuan Blair ate all the food. Now that he finds himself on the floor with another competent defender, the Spurs' defense has shifted from ‘getting by' to ‘getting stops.' It's a dream come true for those of us who suffered through the 'Blair and Bonner as Starters' era. As great as Tim Duncan has been all season, he couldn't do it solo. He needed help all season, but starting Tiago was not an option because that left us with the wretched Blair/Bonner combination coming off the bench. So Tim was cursed by circumstance.

As soon as Pop realized Diaw could play, Tim's production on both ends has come much easier. And so, I credit Boris Diaw. I readily admit that I did not realize Boris was going to have the impact that he has had on our team. I was hopeful he could take the place of Blair, but I had no idea it had the possibility of becoming our reality. Watch Boris in this game. Pay special attention to his presence. Watch him fight players for position 15 feet from the basket. Watch his help-rotations. Appreciate his basketball IQ and enjoy the effect that he has had on Tim Duncan. 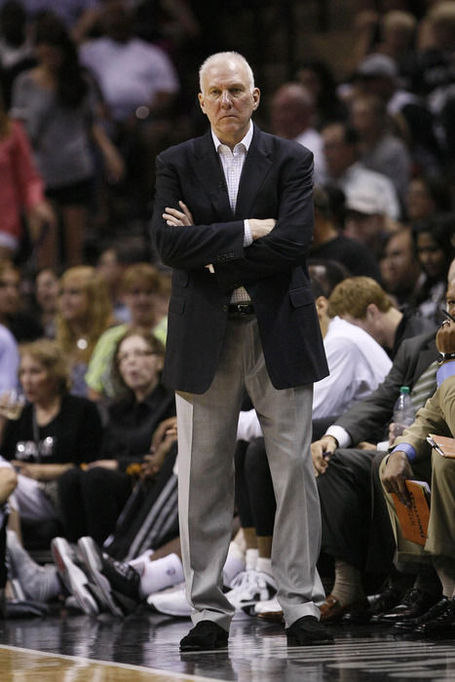 Offensively, the Spurs are following Tony Parker's lead. He's simply unstoppable. I wrote that Tony should be the MVP. Honestly, JRW asked me to write that post and I wasn't even fully convinced that he should be in the MVP conversation. But any doubts I had have been erased. Tony creates everything the Spurs do offensively. It's Tony's drive that puts the rest of the team in a position to take a high percentage shot. Without Tony, I don't know what our offense would look like. He simply does everything for the Spurs; so imagining life without him is impossible.

Quietly, Manu Ginobili has been having a horrible series. The Spurs are playing so well that they have covered up Manu's struggles. During the regular season, Manu led the Spurs with a 24.1 PER. Now, understand that in the majority of the regular season games that Manu played in, he wasn't at full strength. He was either playing with an injury or recovering from one. The fact he earned a 24.1 PER while dealing with injuries is nothing short of superhuman.

After the first two playoff games, Manu's PER is 5.4. He went from first in PER during the regular season to dead last on the Spurs' roster, (James Anderson has the next lowest at 10.2.) Most of Manu's problem is that he's turning the ball over at a ridiculous rate. Per 100 plays, he's turned the ball over at a rate of 29.3. So, in these two games, he's turned it over nearly one third of the time. The Spurs will need a productive Manu to win it all. Expect for him to play much better tonight. Everything regresses to the mean. He will eventually play well and that is why I believe the Spurs will win easily tonight. If we can add a productive Manu to this juggernaut, get the brooms out.

Part of me wants this game to be close. I think we need to be tested and so far that has not happened. Each round should give the team something to build on. Thus far, Utah has been a push-over. We need a test in the first round. Don't get me wrong; I don't want a competitive series, buy a single competitive game shouldn't be too much to ask for. I want a moment like this one to give us the confidence that we can win the close ones. Every one of our championship runs had those moments where the guys fought through adversity and emerged victorious. If the adversity doesn't happen now, I don't know how our guys will react when it inevitably punches them in the nose.

As always, Tony must dominate Fisher, and NBA league pass is recommended for those who are willing to pony up the cash. Almost every Spurs game will be broadcast there, which is especially helpful for those of us who aren't in the San Antonio area. Please don't post links to illegal game feeds in the game thread. Links to illegal feeds are not permitted on SBNation, but you can probably find them out there on the internets if you're resourceful and desperate.