Share All sharing options for: Spurs power through bitter dose of own medicine, take 2-0 series lead

The Spurs were cruising on Tuesday night. It wasn't a matter of if they would beat the Thunder, but how badly the beatdown would look in the final box score as the team comfortably hit the road up 2-0 in the Western Conference Finals. But this is the NBA, and as they say, everybody in this league makes a run. San Antonio was able to hold on for the 120-111 win, but it appeared a dose of Gregg Popovich's own medicine nearly broke his team's surreal streak and made for a sleepless plane ride to Oklahoma City.

San Antonio was scoring at will, flipping behind-the-back passes to wide-open shooters and finding cutters on their way to the basket - they were toying with the Thunder and making this look like a short series. Even the Coyote was calling it. But Oklahoma City made a run that caused a silent anxiety to spread throughout the AT&T Center, nearly erasing what was once a 22-point Spurs lead behind a combined 88 points from Kevin Durant, James Harden and Russell Westbrook; it just wasn't quite enough.

Facing a 17-point deficit and a possible 0-2 Western Conference Series hole as Tiago Splitter entered the game for San Antonio with a little more than two minutes to play in the third, the Thunder resorted to the newest variation of the Popovich special as Scott Brooks employed the hack-a-Splitter technique, slowing down the pace of the game and forcing the young Brazilian to make his freebies. The Spurs' offense was rolling in near-perfect harmony at the time, and whether it was the strategy to foul the backup big man or otherwise, the parade of Splitter free throws (just 5-of-10 went in during the one-minute stretch Pop left him on the floor) appeared to impede the free-flowing San Antonio attack.

"I've never done that before. I think it's a really lousy thing to do. It's unsportsmanlike," a smiling Popovich said at the podium. "It was a good move. I might have done it.

"They felt there was a reason to do it. So it's a good move."

Oklahoma City managed to cut the Spurs' lead to six points with 5:40 remaining in the game, but cooler heads and hot hands prevailed as Tony Parker and Manu Ginobili did what they've done for this team for years: close. The long-time backcourt mates combined to score 18 points in the final quarter and put the game away with two huge shots that we've seen their careers defined by. With the two champions leading the way, San Antonio held off Oklahoma City 120-111 to win its 20th in a row and take a 2-0 lead in the series as it heads back to ‘Loud City' (as they call it in Texas' neighbor to the north).

But this game belonged to Parker from the opening tip. The team's MVP and 2nd Team All-NBA selection had it all going, dropping 34 points on 16-for-21 shooting in nearly 40 minutes of action. Once again he was the model of efficiency for a team not lacking in that department.

"It was just one of those nights. I felt in a good rhythm early on, I was making my outside shots and just trying to be aggressive," Parker said after the game. "The first game after I didn't play for a week, I was a little too much in a hurry. So this game, I took my time and waited for my moment, especially on the pick-and-rolls when they doubled me."

As for the foul-fest on Splitter, Parker said it did seem to have some effectiveness.

"That's the reason you do it ... to kill the rhythm," he said. "I think it got us out of our rhythm and got OKC back in the game."

As Parker mentioned, the outside shot was falling. And we've seen this TP before. When he's hitting from the perimeter he's about as unstoppable as any point guard in the NBA. His eight assists also showed his involvement in the flow of the offense and meant his teammates were hitting their shots, something they hadn't done so well in the series opener. San Antonio finished the game shooting 55 percent from the floor, including 42 percent - 11-for-26 - from behind the arc. It was the Spurs team we've seen all season - the one that finally showed up in the fourth quarter of Game 1.

There were plenty of abnormalities in the opening game of the series. The Spurs committed 14 first-half turnovers, Serge Ibaka didn't play in the fourth quarter, James Harden was quite inefficient and Derek Fisher was nearly perfect. But in Game 2 there was both a progression and regression back to individual means. But, really, it had already happened in the fourth quarter on Sunday night, when San Antonio rolled off 39 points in the deciding frame. Since Pop unleashed his "I want some nasty" timeout speech, the Spurs have outscored the Thunder 159-138 over the past five quarters of basketball, a number that seemed like it might be more uneven at the start of the final 12 minutes of Game 2.

Manu Ginobili was once again playoff Manu, scoring 10 of his 20 points in the fourth quarter and helping rescue his team from the brink of a collapse at the hands of a Thunder team that smelled blood. Popovich said after all this time, there's a trust level he has developed in his star tandem. 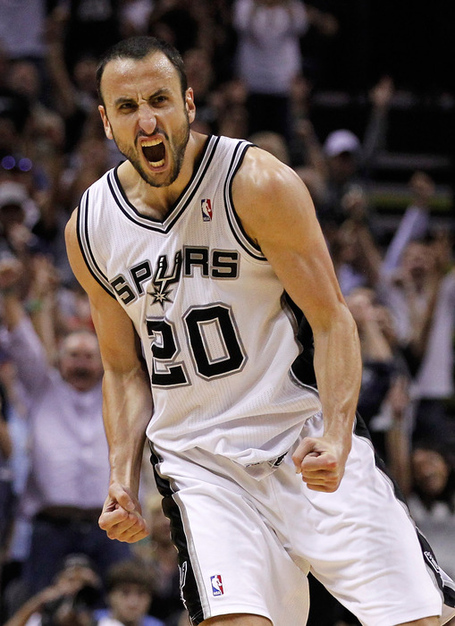 Manu Ginobili has appeared to save his strength for the playoffs, when his team needs him most.

"You can get tired working as hard as they do, and taking turns with it seems to work pretty well," Pop said about the strategy of keeping one or the other on the bench much of the time. "They've been here a long time, and their decisions are usually better than what I'm going to tell them to do. So Tony carried it for a while and Manu carried it for a while.

"But I think everybody spread the floor well, they executed, because everybody else has to do their job."

And it's that trust that has blossomed into what we're seeing in these playoffs, amidst this ridiculous 20-game winning streak. Manu's always been known as the closer with Tim Duncan providing the foundation, but Parker's been in and out at times. After a sub-par playoff last season in which his team was unceremoniously eliminated by the eighth-seed Memphis Grizzlies, Parker has become the team's identity. After perhaps pushing the envelope too intensely in Game 1, he was cool and collected on this night. It's been a work in progress, but the fruits of his labor are becoming more evident as the lights get brighter.

"I think over the years I got better at it."

The Thunder can vouch for that. 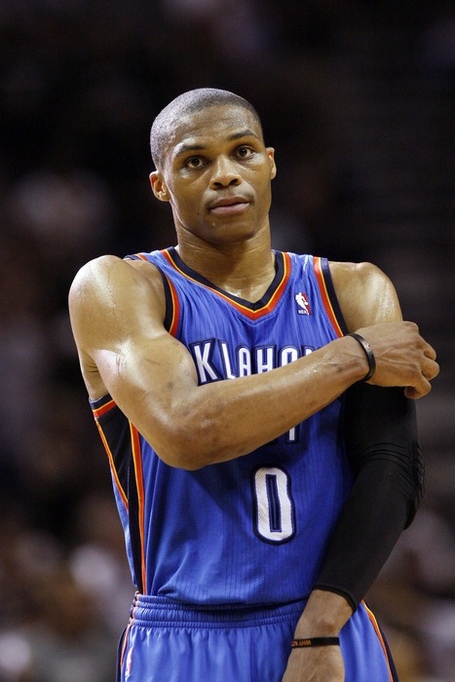 Back to OKC, Mr. Westbrook.

- Kawhi Leonard was fantastic for San Antonio, notching a double-double with 18 points and 10 rebounds while getting the primary defensive assignment on Durant. His versatility on the boards and ability to shoot from behind the perimeter has made him a mainstay in the lineup for what looks like the next decade-plus.

- Duncan had an off shooting night, but his contributions defensively couldn't be overlooked. His four blocked shots put him in second place all time in career playoff blocks, pushing him past Hakeem Olajuwon with 473 rejections ... and counting.

- While the OKC Big 3 combined for an eye-popping 88 points, the rest of the team didn't do a whole lot to help out with only 23 points spread out among the seven others who logged minutes.