Share All sharing options for: Wednesday Loser Thread, For The Ultimate NBA Losers 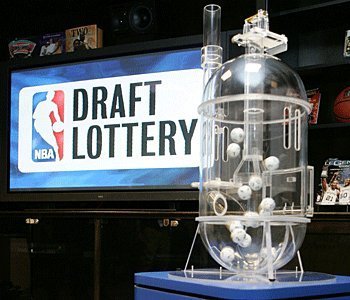 I know this is probably the furthest thing from the mind of Spurs fans right now, but the 2012 NBA draft lottery is being held tonight. And if you think we're losers, you haven't seen some of tonight's "competitors" in the Anthony Davis Sweepstakes being losers on purpose. The epic tanking race to end the season was as entertaining as it was predictable, but tonight it all comes down to the whims of David Stern a swirling cauldron of ping pong balls.

So first, let's go over some of the picks that could change hands tonight. I marked these with a * in the poll:

As of right now, Portland owns the Nets' first-round pick, but the Nets will get it back if it becomes a top-3 pick.
Similarly, the Jazz will get Golden State's pick if it lands outside of the top 7. There's a decent chance another team moves up and makes this happen.
The Hornets own both their pick and that of the Timberwolves, marginally increasing their chance of moving up. As far as I know, Minnesota did not protect that pick at all(KAHHHHHHN!).

So, who do you want to win? My pick is New Orleans. Despite being a division rival, they have strong Spurs connections in Monty Williams and Dell Demps, plus they tried so hard to win every game this past season, when they could have just tanked. They deserve the happiness that can only come from Unibrowdom.

Also, there's another crummy Eastern Conference Finals game tonight in Miami(7:30pm Spurs time), also on ESPN. Not sure why anyone would feel the need to subject themselves to that kind of torture, but it's an option.

And now, some crazy Swedish music.

May the streak never end.