Welcome to the (late) Morning Rehash! Apologies for the delay, Spurs fans. Take the jump to see my notes, quotes, and other thoughts on last night's Spurs' 120 point romp at the AT&T Center!

If you haven't read MatthewTynan's recap of last night's game, you'd be better off doing that now before reading any further.

Looking Back on Trial and Error.

The last few years for the San Antonio Spurs have recently been defined as a transition phase from the gritty, stalwart defense of the last decade to the high-octane, offensive minded squad of 2011-2012. After their second round sweep delivered by the Phoenix Suns in the 2010 playoffs, Coach Popovich knew a drastic change was needed in the way the Spurs played their game. The game was faster, more athletic, and featured more high quality scorers than it had ever seen before. "As we got a little older and personnel changed, we were going to go from one of the best defensive teams to a more middle-of-the-road defensive team," said Coach Pop during a pre-game interview before game 3 of Spurs-Clippers series. "Something else had to change if we wanted to continue to win at a high level, so we went to the offense about two years ago and shifted it to pick up the pace to shift a little bit. Went a little bit from Timmy to Manu and Tony, and more attack early in the clock - kind of Mike D'Antoni-ish."

The 2009 trade for Richard Jefferson obviously pre-dates the beginning of this transition. The idea then was to swap a few older defensive pieces in Bruce Bowen, Kurt Thomas, and Fabricio Oberto for a wing player who can both attack the rim and provide solid defense on the perimeter (as Jefferson previously did early in his NBA career and at Arizona). The idea of the Spurs "Big Four" was born and it was a greatly celebrated one. The question then was whether or not Jefferson could grasp the "Spurs system" which was supposedly so complex and unforgiving that inferior human beings would be banished to an alternate realm filled with pain and mockery. The question should have been, "Is our system outdated?"

Back then, Tim Duncan looked older then than he does now and was no longer the primary engine. Tony Parker wasn't taking over the team as many claimed he was doing and was dealing with the wear and tear of international play. Manu Ginobili expectantly almost spent as much time on the injury report as he did in on the court. Along with all of that, the team no longer had the defensive-minded role players in place to grind opponents down and the lack of a bench become more evident as the seasons grew long. Richard Jefferson was in a spot he was in a role he was incapable of living up to. Jefferson was not a spot-up shooter. His career wasn't made in the half-court offense or catching last second corner threes and trying to create on the baseline. Richard was a transition guy and a cutter who needed a lot of touches early to create his offense from the top of the key. On top-of-that, he wasn't able to re-focus on defense as he once did ages ago. The 2009-10 San Antonio Spurs was not the place for Richard Jefferson.

Riding on the hopes of a specialized off-season with Coach Pop (and the lack of a better option), the Spurs resigned Jefferson to a contract of 4-years, $38.8 million. Many people slammed the Spurs for over-paying the underwhelming forward but the high price gamble appeared to be a successful one in the early portion of the 2010-11 season. The Spurs enjoyed an unprecedented streak of success, going 28-4 before the start of the new year, with Jefferson benefiting from the early boon of offensive production. But his contributions to the team tailed off with each passing month. The offensive structure still didn't incorporate his position into the new aggressive mode of attack and Jefferson's production became limited to mostly kick out 3PT attempts or getting out on the break. By the time the injury-plagued spring of 2011 hit the San Antonio Spurs, it had become apparent that Jefferson was never going to became anything more than just another spot-up shooter for the Spurs. When the big guns went down, Jefferson was incapable of stepping up his game to take over one. His most exciting nights were ones where Spurs fans glanced at the box score and said, "Wow, RJ had 14 points?" Somewhere along that season's road, the concept of the "Big Four" had died. The 2010-11 San Antonio Spurs was not the place for Richard Jefferson.

When the Spurs drafted young Kawhi Leonard out of San Diego State, there were many talks about Richard Jefferson getting the axe through use of the amnesty clause. But with the outlook of the season appearing to be that of closer to rebuilding than one of hoisting another championship banner, the Spurs decided developing the rookie behind a veteran was the smartest way to go. The year started off rocky start - an abysmal road record and early injury to Manu Ginobili fueled the fear that the Spurs Championship window had indeed closed. But with adversity comes opportunity, and the young talent on the Spurs squad lived up to their chance. Gary Neal was proving his previous season was no fluke. Danny Green provided a spark off the bench while also putting in steady production on both ends during Manu's absence. And most importantly, Kawhi Leonard was developing into a starting rotation-quality player - fast. With Leonard, the Spurs finally had a long, athletic wing who could run the floor, grab the boards, play dogged defense, and even (surprisingly) hit the long range shot. Even with the lack of a training camp and regularly consistent practices, Leonard was still molding to the Spurs' quickly evolving plan of high-speed execution - and all in 1/5th the time of Jefferson's total tenure with the team.

And thus, the 2011-12 San Antonio Spurs was no longer the place for Richard Jefferson.

We didn't come up with any newfangled defensive miracle or anything like that.

National Broadcast Note: Steve Kerr is a pretty nice guy. Can't say much for a two other TNT members.

In Attendance: Goldstein was wearing a black & white getup last night. Didn't see anyone else of note.

Show of Force: Slow start for Spurs fans. Must have been free food outside. 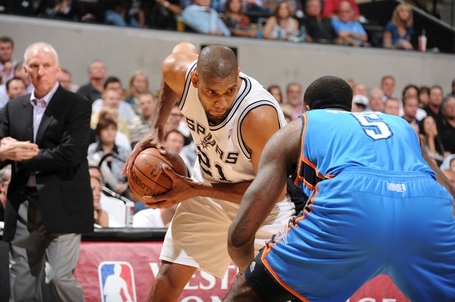 In the Game One Rehash, I wrote "If it wasn't for the turnovers, San Antonio would have found themselves up with a decent margin at half. Spurs players produced an evenly distributed 46.5% shooting, also hitting 4-5 from deep. As expected, most of Oklahoma City's scoring was outside the paint off of contested spot up shooting (Durant) and high pick and roll sets (Westbrook)." Last night started off to the same beat with one major difference: the turnovers. San Antonio only gave the ball over three times in the first as opposed to the fumble-fest of Sunday night and set the offensive tone early but hitting the Thunder hard with the high pick and roll. Oklahoma City did themselves no favors early by sitting back on the screens and letting Parker have all the space in the world. Tony scored 10 of the Spurs first 19 points on 5-7 shooting and contributed to seven other points in San Antonio's 28-22 first quarter sprint.

Oklahoma City spent most of the first half scrambling to make defensive adjustments - they even threw Nazr Mohammed out there to see if he could clog up the paint. But San Antonio was so successful at moving the ball and making the defenders chase the threat, everything between the rim to the AT&T Center ticket windows was wide open. Five Spurs scored in double digits while the other five on Pop's deep playoff rotation each contributed in the point column. Oklahoma City was able to keep things within striking distance for a portion of the 2nd quarter when the Spurs got a bit too care-free with the ball but more so through the herculean effort of the Thunder big three in Durant, Westbrook, and Harden (combined for 36 points in first half). But the Spurs, led by old man Tim Duncan's grumpiness, pushed the lead back up to 11 at half.

5-5 FG for 13 points. That is how the 2nd half opened up for San Antonio. Even though Oklahoma was getting offensive production themselves, it just wasn't at the pace and efficiency of the Spurs. San Antonio opened up the throttle and was up as much as 22 points with less than five minutes remaining in the third quarter. But the rhythm of the game changed very noticeably as soon as Scott Brooks applied Popovich's Hack-a-Shaq strategy on Tiago Splitter - five times in a row. Although Splitter hit half of his 10 attempts and had increased the Spurs lead, the tempo had shifted in favor of the Thunder.

From there the Thunder ran micro-ball with Durant, Westbrook, and Durant playing nearly all the 4th quarter. The Spurs high pick and roll began to break down as Oklahoma City's tiny lineup was able switch off on assignments and press the ball handler with ferocity. To their credit, the Thunder players were everywhere; Diving for loose balls, crashing into crowds for rebounds, and making almost each possession on their end an efficient one... but then Tony and Manu happened. After a Westbrook 3PT cut the Spurs lead to 7 with just around 4:17 remaining in the game, Tony Parker and Manu Ginobili took the Spurs sputtering 4th quarter offense into their own hands - scoring a combined 12 of the Spurs' last 17 points (remaining five belonged to Kawhi Leonard). Manu's aggressiveness was the catalyst in the game-end explosion, proving once again that the Thunder just have no concrete solutions for the Spurs' backcourt. 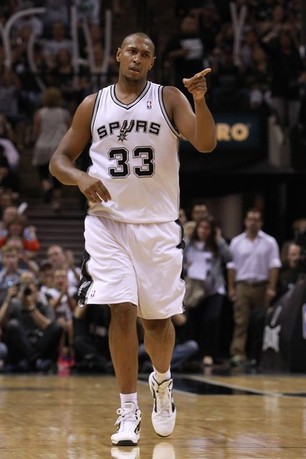 Let me put it to you this way: There were shots that I thought had no chance and they went through, barely touching the net. Tony got where ever he wanted, whenever he wanted. That five minute setup for the corner 3PT was just an epic crowd reaction from start to finish.

We have probably have already seen the last game of this series that will feature Perkins in +20 minutes of court time. Kendrick is a great paint presence but is a huge liability in this series.

"You just got chalk lined." - Considering the 1st three quarters and what Duncan did to Ibaka, this seems appropriate.

@HPbasketball: Perkins should not touch the ball unless he's blocking a shot.

@dailythunder: The Thunder are simply in over their heads right now. No other way to put it. 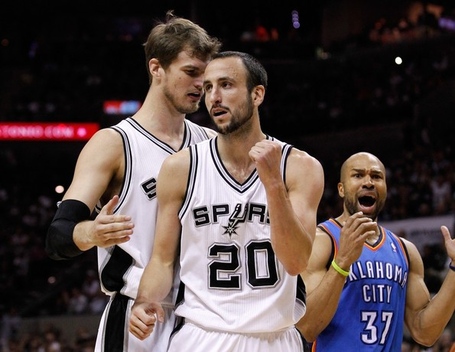 Stay level headed. While the Spurs, historically, don't have many problems playing on Oklahoma City's home court, they will be walking into a nest of 18,203 very loud Thunder fans. Chesapeake Energy Arena is one of the loudest venues in the NBA and the fans there realize that there very well may be only two more games played there. Plus this series is about to get even more physical.

Stay tight on the shooters, especially James Harden. There is a reason people compare Harden to Manu Ginobili. San Antonio can't afford to let him run wild and energize the team and home crowd.

Get ready for small ball deluxe from the Oklahoma City Thunder. It's the only way they'll be able to switch on the pick and rolls.

Get inside Westbrook's head again. Russell Westbrook is his own worst enemy and the Spurs know this. Bump him, attack him, make him do too much, and get him to take tough shots. That last 3PT attempt from Russell was one of the dumbest things I've seen during this post-season.