As Tony Parker darted in and out of the lane, scoring at will while slinging the ball to perimeter shooters and cutting big men during Game 1's ... meh, mundane 106-91 San Antonio win over Utah, it was clear the Jazz were in dire need of a change of plans. They had to stop Tony Parker. And while that hasn't been an uncommon technique this season, it has rarely produced the fruit its practitioners had hoped. You see, what many failed to talk about following the opening-game victory was that the Spurs, while handling business appropriately in the win, didn't really play well themselves. They, too, had adjustments in store for their playoff foe. And when a young Tyrone Corbin and his youthful Jazz team try and match wits with the wily Gregg Popovich and tenured Tim Duncan, they learn a valuable lesson: Right now, San Antonio is a place where the opposition's game plan goes to die.

Jazz point guard Devin Harris, already a villain of yesteryear to Spurs fans, mentioned following this series' first game that Parker may receive "a hard foul or two." Now, it wasn't a statement made with malicious intent, and it certainly was one the San Antonio point guard has heard before, but it clearly wasn't the answer to Utah's problem. As I wrote in my game story from last night, the Jazz approached this game differently in regard to defending Parker. It was indeed a defensive game plan aimed at slowing the Spurs' All-Star, but, again, it didn't matter. Sometimes it just comes down to talent, depth and experience, none of which Utah owns the edge in against the superior Spurs. You might have your fresh game plan; a new look to throw at the No. 1 seed in the West. But it matters little when you're up against Pop, his marker and a whiteboard.

So what did go wrong with the game plan?

"To be honest, we won't figure it out until tomorrow in practice with film session," Jazz forward Josh Howard said following the game. "Overall, they ran the pick-and-roll well. They hit the open guys and knocked down the open shots. When they are making three's like they did tonight it is tough to win."

And that's just it. Much of the time, a plan centered around X's and O's is only as good as the personnel on the court and the basketball abilities those individuals possess. And you've heard it throughout the annals of NBA history, from any coach, player or assistant who's ever been involved in the game. Sometimes, when the shots are falling, there's just nothing you can do about it.

Still, it wasn't as if the shots were all contested for San Antonio last night. There were plenty of open looks for the Spurs, almost all of which were a result of Utah's new approach for Game 2. And this is why, when the shots are falling, the silver and black are nearly impossible to defend.

"They shot, I don't how many 3-point shots, but they made perimeters shots. We did a pretty good job of what we talked about in the beginning of the game of keeping Parker off making layups and turning him to a jump shooter," Corbin said. "He made some jump shots but he broke us out a little when he kicked it out and those guys had wide open shots on the perimeter and they made them. We came down and we couldn't make shots especially at the end of the second quarter.

"It took our spirits but we'll be fine."

It's a difficult task, trying to defend the Spurs. Take away Parker and you must deal with the inside-out passes to the perimeter. Take away the 3-ball and you leave Parker in one-on-one situations, whether it be in the pick and roll or in isolation. Utah chose to make its focal point squarely on Parker's chest, hoping that the farther the Spurs got from the basket the lower their percentages would be in the final box score. Hey, when you have to pick your poison you might as well choose the less potent of the two and hope to have a fighter's chance, right?

But it didn't work out, and now it's time to move forward, for both teams. The Jazz have the worst road record of any playoff team (11-24 if you count the last two games), so the two losses to one of the league's best home teams isn't all that surprising. And there's no doubt they play much better in front of that notoriously rowdy Salt Lake City crowd. But the Spurs - currently rolling along on a 12-game winning streak, their longest of the season - have found little trouble regardless of game location. Stopping this team at this juncture seems to be a task inappropriate for the rest of the league, save for a couple of the NBA's most glamorous contenders ... maybe. 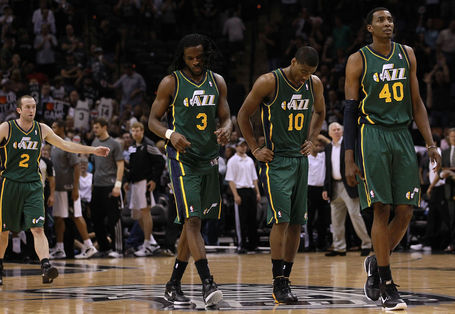 Can Utah feed off its home crowd, or does this season end in Salt Lake City for the Jazz?

Still, Utah must find some way to battle, to keep their hopes alive even if the sun seems ready to set below the Rocky Mountains. There must be some solace in the fact these two games have passed and Jazz are headed back home, even if yesterday might have been their last taste of the road until next season.

"Like I said, they played well and we didn't. That was every facet of the game: defensively, offensively, and transition," Jazz forward Gordon Hayward said. "(It was a) tough game for us but they are the number one seed for a reason and they are playing in their home arena.

"We play a lot better when we are at home."

And that's a very good thing for the Jazz, being back in Salt Lake City. Because this season in San Antonio, game plans, as well as the title chances dependent on them, tend to perish along the way.