That was a thrilling ride on Sunday. Nice to see this team has its own Memorial Day Miracle. There are so many things that you can say about last game, and so many things we shouldn't say about it. I've been rolling the entire game over in my mind and I keep flip flopping like Stephen A. Smith about whether or not this game should bode well for the Spurs or not. The very least we can say is, we protected HCA so far. Without further ado, here's some random thoughts.

On the one hand, the Thunder forced 16 turnovers and scored 19 points off those turnovers.
On the other hand, if the Spurs don't turn the ball over that much, this game is most likely a win by 20.

On the one hand, the Thunder should've won 3 out of the 4 quarters. It took a super human effort by Manu to have the Spurs up 6 at the end of the first. The Thunder then outscored the Spurs by 15 in the next two quarters.
On the other hand, the Spurs only needed 1 good quarter to beat the Thunder by what should've been 7 (without some garbage 3's). And the reason they lost the third quarter was because the Thunder made shots while the Spurs didn't. If you take a look at the shot chart, we took 8 shots in the paint, and hit 3. We had 4 wide open corner 3's and made 1. The Thunder had 5 shots within 5 feet and made 3, while hitting 2 of their 5 three pointers. Not to mention hitting a good % on their midrange shots. It reminded me of game 3 against LA where we couldn't hit the broad side of the barn.

On the one hand, Derek Fisher channeled 0.4 again and decided to show Matt Bonner up for voting him off the NBA players union going 6-6 at one point.
On the other hand, Neal still outplayed him and it's highly unlikely Fisher ever does that again.

On the one hand, Westbrook and Harden are going to have much better games the rest of this series.
On the other, so will Tony Parker and Danny Green (I'm leaving off Duncan because I think that will be a familiar statline for him this entire series).

On the one hand, Kevin Durant is like a 7 foot tall Gary Neal.
On the other: 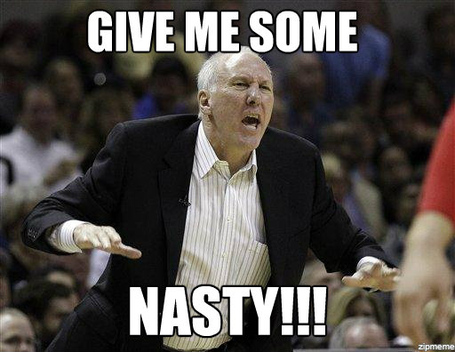 What does this all mean?
A comfortable win for the Spurs, and by comfortable I mean 14 point win with Duncan showing off against a weak onball defender in Serge Ibaka. Think 20pts, 13 rebs, and 4 assists. This includes a huge dose of nasty from Jax, Green and Manu.