Share All sharing options for: Manu carries Spurs through slow start to win 101-98

SAN ANTONIO - The San Antonio Spurs have had more than a couple of different players step up from the supporting cast all season long. There have been numerous ‘heroes' in each of the team's 58 victories, but this is the stage of the playoffs that requires a level of fortitude not common in most NBA players. For the Spurs to secure win number 59 they needed their closer to have the kind of game we've seen in title runs past. They got it.

Manu Ginobili turned back the clock, and in doing so may have ruined the Thunder's best chance.

‘El Contusion' erupted for 26 points in his best performance of the season to lead the Spurs to a 101-98 come-from-behind win over Oklahoma City and a 1-0 series lead in the Western Conference Finals. And his contributions couldn't have been more welcomed in a playoff contest that saw Danny Green go 0-for-Sunday night, 14 first-half turnovers and a bevy of missed shots. Of course it's impossible to tell, but without Ginobili in the lineup last night San Antonio may not have won its nineteenth consecutive game.

"No Manu, no championship" has been a commonly used phrase in San Antonio since the star guard broke his shooting hand in Minnesota during the fifth game of the season. As the Spurs continued to win despite Ginobili's absence, others began to fill in the different roles left vacant with Manu's injury and produce at an unexpectedly high level. Though the high level of play lessened the intensity of the sentiment that the Spurs couldn't win without their Argentine star, it didn't eliminate it. They know they need this guy.

"That's Manu's game. He's a scorer. He's somebody who we depend on to create and make things happen," Spurs coach Gregg Popovich said at the podium following the game. "Whether it's shooting or driving or assisting somebody else. That's what he's done for us his whole career.

"And it's very important to us. Without that we have a tough time winning."

Each facet of his game was on display in Game 1, but it was the scoring that turned out to be the most crucial element. Ginobili has made a career out of timely plays. Without them there would most likely be fewer banners hanging in the AT&T Center rafters. But here he was again as we'll always picture him, twisting and turning his way to the hoop, lining up and uncoiling on that funky-looking jump shot. The word ‘competitor' is most likely overused at times, but Manu defines the term.

Down 71-62 heading into the fourth quarter, Ginobili took the game over at a time when his team desperately needed him to do so. His 11 points in the final frame helped pull the Spurs out of a cold spell the No. 1 seed just couldn't seem to shake. San Antonio shot less than 39 percent from the floor through the first three quarters, but when the home team finally broke loose there was little Oklahoma City could do to stop it.

The Spurs exploded for 39 fourth-quarter points and committed just one turnover over the final 12 minutes to seal the deal. Not only was he good, Ginobili was perfect from the floor. He hit each of his three shot attempts and connected on all five free throws as he outshined the newly crowned Sixth Man of the Year James Harden in the win. Manu reminded everyone exactly why he's regarded as one of the best sixth men of all time.

"He's just left-handed and crafty," James Harden said after the game, not exactly sharing any breaking news. "He can get to the rim. He made plays in the fourth quarter. We've got to do a better job of containing him and make him make passes.

"Like I've said, he had a very good fourth quarter. We've just got to control that and come back in Game 2 and be ready."

But Ginobili contributed all night long. It was the inspiration of Pop that seemed to really set the wheels back in motion.

"I need a little bit more dose of nasty," Pop demanded during a fourth-quarter timeout with his team trailing by nine points and the TNT microphones rolling. "I'm seeing a little bit of unconfidence, a little hesitation. It's not supposed to be easy. Every round gets tougher.

Pop got what he was looking for. Contributions began coming from every angle and outlet, just as the case has been over the entirety of the NBA season for the Spurs. Tiago Splitter triggered the run at the start of the fourth prior to Ginobili's re-entry. He fed off his point guard and capitalized around the rim off cuts and the pick and roll on his way to seven points in the quarter. And while the offense certainly picked up, the Spurs needed stops. San Antonio had attempted to send several different bodies at Durant throughout, but in winning time it was Stephen Jackson who drew the final-stretch assignment. Jack's length and smarts gave Durant fits, and his lone basket of the game - a 25-foot bomb from the top of the key - gave the Spurs a 91-84 lead with three minutes remaining in the game. 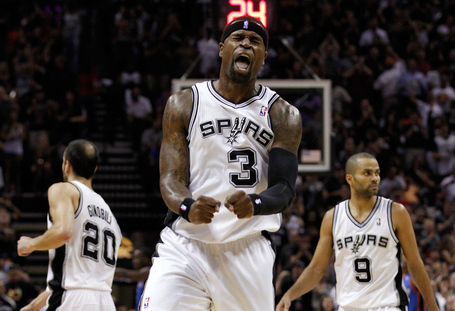 Jack came up huge for San Antonio in the fourth, defending Kevin Durant and hitting a back-breaking three-pointer late in the game.

And once the energy picked up, so did the confidence. Parker had a rather chilly shooting night from the floor, but the scoring became contagious. The Spurs continued to cut into the lead the Thunder had built, but as the score got close Parker was able to find his way back to his usual level of effectiveness. Parker's 19-footer from the top of the key tied the game with about eight minutes remaining, and his difficult, turnaround floater in the paint (plus the foul) gave San Antonio its first lead since the second quarter just moments later. Throw in some big shots from Gary Neal (12 points) and a 16-point, 12-rebound effort from Tim Duncan, and the Spurs earned a hard-fought victory at the AT&T Center for their ninth straight playoff win.

"We knew as a team we were not playing our best basketball in the third quarter," Parker said afterward. "Then in the fourth quarter we played a lot better, made some shots. Made the stops that we needed.

"And Manu was great tonight."

And it all comes back to that. Ginobili was the difference last night. Sure, Pop's motivational techniques are perhaps unrivaled, and it was just a matter of time before the supporting cast started connecting, but Manu's game kept this team in it while everyone else struggled to put the ball in the basket. And if you're Oklahoma City, this should be a concern.

Each player admitted the week off builds a layer of rust that isn't always easy to shake off, and the Thunder might have just missed a golden opportunity. San Antonio turned the ball over left and right in the first half, which allowed Oklahoma City to play its game, to get in that comfort zone out in the open floor. But the visitors didn't take advantage enough of the situation. They weren't able to land that early kill shot that might have taken the hungry fans out of the equation.

(I tweeted about it earlier, but that crowd was going bonkers as the Spurs closed in on the lead in the fourth. The people had been looking for an excuse to explode all night, and once the blood was in the water it was over. That crowd fed the fire.)

As many times as San Antonio coughed the ball up in the first half, 10 points off turnovers is something you can live with. The Spurs' transition defense played well in recovery, and once Oklahoma City was forced into running its half-court sets they just weren't able to execute and hit shots like they expect to. And for the kind of athleticism the Thunder boast, being outscored 50-26 in the paint seems inexcusable. This team shoots a lot of perimeter jumpers, and when shots aren't falling it generally means trouble. It's difficult to maintain a consistent field-goal percentage when you rely too heavily on the jump shot. Kevin Durant scored 27 points on 8-for-19 shooting while teammates James Harden and Russell Westbrook went for 19 and 17 points, respectively, on 7-for-17 and 7-for-21 shooting.

Yes, it's only one game, but San Antonio didn't really play that well, at least until the fourth. You can't imagine they'll turn the ball over that many times again, and it's unlikely the Spurs will shoot that poorly for as long a stretch as they did.

It was just the first game of what could be a long series, but the Thunder might have just lost their best opportunity to seize any early momentum. And on a night where the bearded, award-winning reserve from Oklahoma City was in town, last night it was the Spurs' sixth man who led his team to victory.