It's been over a week since my last home game post. Three Spurs games have occurred within that time frame: Two resulting in the sweep of Chris Paul and the Lob City Band and the last being the most electric win so far in the 2011-12 Spurs playoff run. Grab your Irish Coffee - it's time for the Morning Rehash.

If you haven't read MatthewTynan's recap of last night's game, you'd be better off doing that now before reading any further.

On Friday, I joined Thunderground Radio, the official podcast of DailyThunder.com. for a little discussion on the Western Conference Finals. In it, I mentioned two things vital to the success of the San Antonio Spurs in this series.

The first one has been a team constant throughout most of the season; staying the course. We see it so many times with NBA teams. When the game is slipping away, someone takes it upon themselves to take ownership of every offensive possession. Sometimes we see a Herculean effort of scoring production that results in a win but the usual result is a high-volume, low-percentage bombardment of ill advised shots. You will never see this with the San Antonio Spurs. Regardless of how the game is going, the Spurs will always play their game. Whether up or down big, on the wrong side of a hot streak, or in the middle of a cold streak, they always have the patience and composure to keep pounding that rock.

There is a difference between a player demanding the ball, like Manu did last night, and a black hole on offense, like Kobe Bryant. When the ball was in Manu's hands, the Spurs still ran their sets, working together to give their guard the best chance of getting to the basket. In those closing minutes, Ginobili didn't sit on the high wing, jab stepping for an eternity, only to brick up a heavily contested jumper. The high screens still existed, the ball still moved, and the best scoring option was still found. There may have been some slight changes to the method but the fundamentals, and usually the results, never changed.

The second item key to the Spurs success in the Western Conference Finals is one Emanuel David Ginobili. It's been a rough year for Manu. With a broken hand and the hip injury keeping him sidelined for half the season, Manu was never able to return to his "true form." Even in the first two series, Manu's production was rather sedated (but solid) during a time many Spurs fans eagerly describe as "Super Manu." For the Spurs to counter-act the intensity, drive, and production of James Harden, San Antonio is going to need Manu to return to that "Super Manu" form as soon as possible. There haven't been many players in Spurs history, or in NBA history for that matter, that can turn a game and a series around on their intensity and madman-like hustle on the court.

Last night, both of those much needed elements, the mental steadiness and the power of Manu, were present.

Everyone he guards in the league, it's an education for him. He's not Bruce Bowen. He's learning quarter by quarter and he'll learn more about Kevin Durant tonight. That's just the way it is for a kid who went o college for one year. He'll do the best he can and give the effort. I'm sure, at time, he'll do some good things and other times Kevin is gonna drill him.

- Coach Popovich on Kawhi's growth as a defender.

Crowd Gimmick: The "Electrifying" signs as mentioned in the Clippers' series. Most people use them for fans.

Show of Force: AT&T crowd was a little slow piling in but their number was in full force by the time of the 4th quarter run. 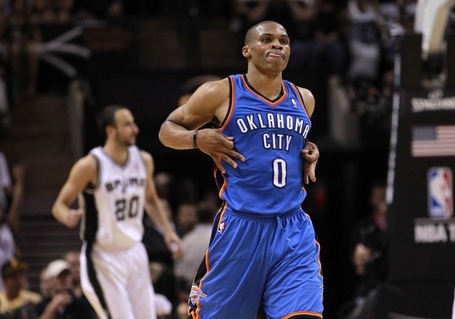 via (Photo by Tom Pennington/Getty Images)

The nipple pinching doesn't bother me as nearly as much as the location of the nipples do.

The San Antonio Spurs should consider themselves lucky to walk away with this one. The poor shooting by the Thunder limited the damage of the 15 points scored off of 14 Spurs first half turnovers. If it wasn't for the turnovers, San Antonio would have found themselves up with a decent margin at half. Spurs players produced an evenly distributed 46.5% shooting, also hitting 4-5 from deep. As expected, most of Oklahoma City's scoring was outside the paint off of contested spot up shooting (Durant) and high pick and roll sets (Westbrook). The Thunder also suffered from the turnover bug in the 1st quarter (6) but managed to right the ship (1 in 2nd quarter) while the Spurs kept bumbling it away. The result was a swing from +6 Spurs advantage in the 1st quarter to a +1 Thunder halftime lead. That change in ball control also saw a change in Thunder shooting efficiency from 27.3% and 54.2% respectively. It's amazing how different a game looks as soon as a team cleans up their simple mistakes.

Give credit to the Thunder though for the Spurs turnovers. They are good at reading the passing lanes and use their size and athleticism efficiently on defense. But despite all of that, the Thunder are not what some believe a "great" defensive team. They get lout-of-place in ball motion too easily and the off-the-ball defenders will too often lose their man. With the exception of Nick Collison, who curiously only played 17 minutes as compared to the non-existent Perkins 28, the Thunder front court is a massive liability away from the paint and usually incapable of defend the roll man on the pick and roll sets. Serge Ibaka is a good glamour blocker (help defense blocks) and a decent rebounder. That is about it. The "defensive player of the year" and "1st Team" votes are bit over the top, in my opinion. Otherwise he would have had more than 22 minutes in this game... and the Spurs three most efficient scoring plays wouldn't have been cutting to the basket (63.6%), posting up (57.1%), and the P&R roll man (47.4%). Oh yeah, San Antonio was also 5/7 for 10 PTS off of the offensive glass. There is a reason why the Thunder wants to counter with small ball, early and often (even though it isn't that wise).

The 4th quarter outburst led by Tony and Manu wasn't a revelation of scoring. With the exception of the cold shooting in the third quarter, San Antonio was living in the paint all night. In the third, the Spurs did a much better job of controlling the ball (only 2 TO) and finding the open man but the shots just weren't falling. The Spurs were 6-24, including 2-11 from 3PT range. A great portion of these looks were wide open and just too good to pass. Even as good as a shooting team San Antonio is, sometimes the rock doesn't drop in their favor. This is one of the many reasons taking care of the ball is vital. 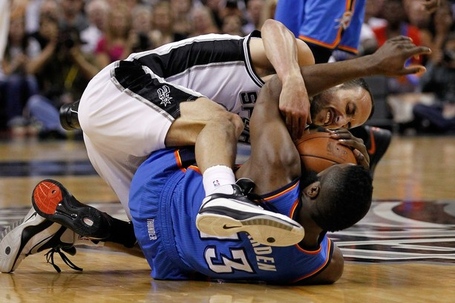 When Stephen Jackson made his two free throws at the end of the game. Even when the Spurs were up as many as 10 with 1:57 left to play, I just didn't feel the lead was safe. Oklahoma City hitting 4 of their last 6 3PTA in the final two minutes helped support that feeling.

Two game bosses this time around. Manu took over the 4th quarter, scoring 9 of his 26 points in a fashion we haven't seen in a long time. This was Manu's best performance of the year, in my opinion. He hit all three of his attempts in the 4th quarter while also recording a pair of assists and rebounds.

Stephen Jackson was placed on Kevin Durant guard duty late in the game. The result was an 0-2 FGA, 6 points (5-5 FT) 4th quarter performance from Durant. Jackson did a great job not only defending the isolation plays but also the incoming passes. Several of the Thunder plays ran late because they just couldn't get the ball in time to Kevin. Great defense leads to good offense. Stephen's fire and grit on the defense end help fuel a Spurs come-back victory.

Honorable Mention: Tony Parker, who scored 7 of his 18 PTS in the 4th quarter.

You're the starting center on a Western Conference Finals playoff team. Your personal fouls should never equal the amount of points in a near-30 minute time frame. Also, two rebounds. Tony Parker had 8. Only Danny Green (2) and Gary Neal (1) had as many or less rebounds for the Spurs.

OMGMANUWELVOEYOUOO. I think that is the best way of explaining that emotion.

@netw3rk: I hope the Celtics and Sixers watch this game and feel ashamed.

‏@awfulannouncing: Stephen Jackson has to rate pretty high on the "insane athletes who turn into clutch role players late in their career" list.

@steven_lebron: Seriously, what happened last: A Spurs loss or a Bobcats win. 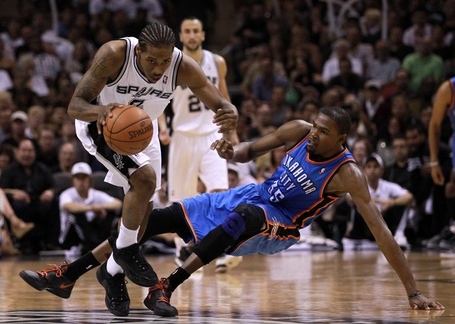 Maintain control of the ball. You can't give the rock away 14 times in one half and expect to be able to win a playoff game, let alone a series, against the Oklahoma City Thunder. San Antonio only turned the ball over three times n the second half and that needs to be the constant from here on out. The Thunder are too good at making teams pay for their mistakes (19 points off turnovers). San Antonio also needs to keep Thunder on the outside looking in. The San Antonio Spurs had 50 points in the paint while Oklahoma City only managed 26. Off that stat alone, it's easy to see which team is likely to have a more efficient scoring night.