IndiManu Jones prepares to take his prize
Universal Studios: Indiana Jones and the Raiders of the Lost Ark

It's a story of a man in search of a priceless treasure that belongs in a museum at the AT&T Center. It's a conflict against countless powers that rise up against him, stand in his way, and force him to face his greatest fears, and rely on his trusted allies to secure the prize: the trophy of LarRé Ob-Rhine. The summit of all myths and legends, and the goal of his entire life's work.

IndiManu Jones traipses through the NBA playoff jungle in the search of that elusive golden idol, the trophy of LarRé Ob-Rhine . His journey has been fraught with peril, having already escaped the giant rolling Clipper ship. Will his frantic grab for the trophy end with success? Alas, who does he find upon his exit from the Temple of the Basketball Warriors but his dreaded nemesis, Westloq! Laughing maniacally, the Thunderous point guard uses his team's superior firepower to make his own power grab for the golden trophy.

Once again, IndiManu, what was briefly yours is now mine.

Temporarily deterred, IndiManu searches the world for help in his quest to reacquire the trophy of LarRé Ob-Rhine. He heads over to Europe, looking for his basketball love, Tiarion Ravenwood. Tiarion is not receptive to IndiManu's overtures, not wanting to part with the headpiece of the Staff of Euroball. During their argument, James Beard Toht, an elusive agent of the OKC, enters and demands to know the whereabouts of the golden idol, but IndiManu manages to escape his "persuasive" tactics - although, Tiarion is captured.

On the run, IndiManu heads to San Antonio to pick up other members of the team, Tony Round and Matty Scott and heads out to rescue Tiaron. However the team takes the wrong train and ends up in the lair of the Thundees. IndiManu, Matty, and Tony Round watch as the High Priest, Perka Ram, sacrifices a Laker to his god in the hopes of finding the ever elusive championship ring. As Matty fails to defend himself properly, all three are captured, with Matty about to become the next human sacrifice.

The speedy Tony Round manages to escape, using his crossover to reverse the trance that had subdued IndiManu. The Maharajah tries to use voodoo to bend IndiManu to his will and prevent the escape, but as always, Tony Round dominates Fisher.

Tony Round leads the trio on a OMFB train out of the lair, with IndiManu dipping, diving and not braking along the way. A shell-shocked Matty holds on for dear life. 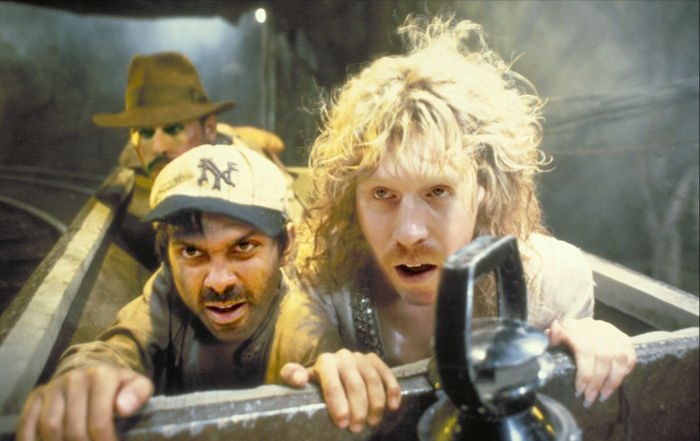 IndiManu realizes that if he is to find Tiaron and recapture his prize, he needs to acquire the help of his relative, Professor Timmeh Jones, who has made the search for the LarRé Ob-Rhine artifact his life's work. However, unbeknowst to the team, his work has been funded by one Walter Durantvan. Knowing how close IndiManu is to finding his holy grail, Durantvan sends Professor Jones on a trip to Utah to prevent the two Joneses from meeting up. Timmeh soon realizes that his journey is a ruse, and makes Utah nothing but a brief detour.

IndiManu and Tony Round track down Timmeh, as the Professor has rebounded his way back to San Antonio. On their way yet again to OKC, the trio (historical documents make no comment on Matty's sudden disappearance) is trapped in the Castle L'Angeles, forced to survive the onslaught of fiery lobs. Whatever will these heroes do?

Tony Round solves the problem by running so fast around the flames that he pulls all the air from the room. The fiery lobs die down and the intrepid trio resume their journey to OKC. After arriving in the land of the Thunder, Professor Timmeh deduces the location of Tiarion - she can only be in the Well of Goals!

Trapped in the well with his greatest fear, injuries snakes, which can't be avoided even with his patented Eurostep, both IndiManu and Tiarion lament ever escaping to claim the golden prize. Yet whose head should pop through the ceiling, but that of IndiManu's good friend, Kawlah. The San Diegan is just the shooter and defender the duo need. Kawlah lowers down a rope, allowing the intrepid team to continue its quest.

Just then, another obstacle rears it's head, the giant soldier Sir Chewbacca. IndiManu must beat his stout defense before continuing on - not an easy task. Sir Chewbacca blocks every attempt by IndiManu to reach his goal. Seemingly defeated, IndiManu finally is able to explode past the giant man, using his pinpoint shooting to wreak havoc along the way.

The team races after Westloq in pursuit, but Westloq thinks he's found a way to make the trophy his forever, by outgunning anyone else. Soon he discovers that a rocket launcher is not infallible. IndiManu leads his team in surrounding Westloq and his cronies with the winds of multiple passes and the mists of backdoor cuts. As a dread glow surrounds his men, Westloq's head explodes.

"How does this happen?", screams the irate Durantvan. "I have youth on my side, I have athleticism, I have superior scoring ability!" "How can this ragtag bunch of old, boring players beat me to my grail?" The quiet, subtle, unspoken reply is clear to those who can read between the lines: it's the quiet guys you should fear.

Author Note: This is a mashup of the three Indiana Jones movies. If haven't seen them, you should - they're good. In fact, go buy the DVDs. And just remember that it's only a trilogy. THREE movies in all, and no more.

Photoshopped Images - DrumsInTheDeep (There are no words - these previews would be lost without his work.)