SAN ANTONIO - Pre-game chatter prior to the tip of Game 2 in San Antonio centered mostly on the Jazz' efforts to slow down the Spurs' best player, specifically calling for "a hard foul or two." But therein lies the problem with that kind of game plan against the West's No. 1 seed: if you focus your attention on slowing Tony Parker, you open the passing lanes to the perimeter. And when San Antonio's shooters get open looks, well, there's typically a pretty consistent result. San Antonio shot 57.3 percent from the floor to Utah's 34.4 percent, which makes the 114-83 Spurs victory a little more explainable.

For a Jazz team hoping for better results in the second game of this opening-round series, the start of tonight's game couldn't have been any worse. As Utah came out clearly more physical in their defense of the Spurs' MVP candidate, Parker did what he's done all season to teams looking to cut him off: torch them with his court vision and passing. The Jazz tried everything from denying him the ball, going under screens to force the long jumper, trapping and hedging hard on the pick and roll and collapsing on him at every opportunity. But it didn't matter. San Antonio was too much for Utah on both sides of the ball.

Parker had 18 points and nine assists, Kawhi Leonard had 17 points and five other Spurs scored in double figures as San Antonio blitzed the Jazz at the AT&T Center. Utah might have changed its game plan on TP, but when you're as outmatched by an opponent as this particular eighth seed is, it simply doesn't matter.

"Yeah, they were aggressive, you know, in the first half. (They were) really aggressive and playing hard, and it was different from Game 1," Parker said at the podium following the win. "But they were not shooting the ball well. I thought defensively we played pretty good and we matched their energy." 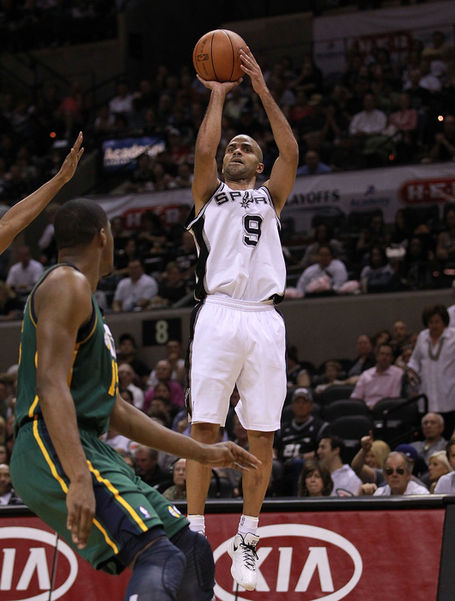 Despite a new game plan against the Spurs' All-Star, Tony Parker still got his.
Photo by Ronald Martinez/Getty Images

‘Pretty good' might be the right phrase to describe this team's defense tonight. San Antonio took Utah's adjustment and raised them one of its own as Game 1's virtual non-factors Danny Green and Kawhi Leonard came up big in the first half, combing for 25 points before the break. The Jazz had 28 points as a team in that span. Green finished the game with 13 points.

With Utah's strength being its interior presence, San Antonio swarmed the ball whenever any of their bigs caught it inside. Al Jefferson was 5-for-15 from the floor for 10 points, Derrick Favors 3-for-9 for nine points, Enes Kanter 4-for-8 (the most efficient of the group, though most of his eight points and 10 rebounds came in garbage time) and Millsap 4-for-11 for nine points. The Spurs held the Jazz to 28 first-half points, just three more points than the franchise low for an opponent in the first half (San Antonio held Portland to 25 points in the second half on June 4, 1999).

Despite the fast start, San Antonio fell into a bit of a slump early in the second quarter as the Jazz began crashing the boards against the smallish Spurs front line. After falling behind by as many as 13 points in the first quarter, Utah cut the lead to five points with seven minutes remaining in the second. Then came the onslaught. San Antonio finished the half on a 22-2 run and went into the half with a 53-28 lead. The game, at that point, was over.

Tim Duncan, who had 12 points and 13 rebounds, called it an all-around great game, especially after the second-quarter lull. As the 36-year old sat at his locker following the game, he acknowledged the young players who were getting their first taste of postseason play. (Green had a few minutes last year, none of which were significant.) Still, he knew who the fire-starter was.

"(Green and Leonard) played great. They really set the tone early on; I think Tony was the one who really set the table for them, though. He really drew the defense ... found them for some shots," Duncan said. "(The Jazz) were playing defense really well and getting some stuff in the open court. But bottom line, as a team, we moved the ball really well and those guys made shots for us. It's great when it comes from all kinds of different areas." 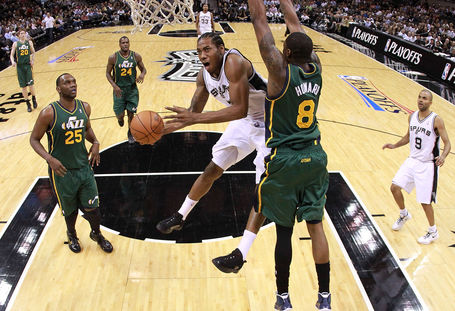 For Pop, the contributions from the two young players have come as a surprising luxury.

"Kawhi is someone who ... surprised us. When you draft someone you do your best job to research it, and when that player comes in, that's when you really learn about him," the coach said. "In Kawhi's case, he's absorbed information really well. He performs his role, he plays (defense), he rebounds, he runs the floor and he's got a way about him where he's not so anxious to show us that he's got every move in the world.

"He's levelheaded and takes things when they come. A lot of rookies can't do that."

As for Green, Pop sees his emergence as an example of a little trial and error.

"He came into training camp and he played great. He was aggressive, he was physical, he was determined, and some of that had been lacking in the past where he was a little lackadaisical," Pop said. "He's gone through some tough times, or some situations where he's been cut ... and this time it clicked for him."

It was obviously a great night for the Spurs and the complete opposite for the Jazz. But speaking of being levelheaded, Pop will never be accused of failing to keep things in perspective.

"I thought we came out aggressively. It's still a basketball game, and we had a good night, they had a poor night. This was just a matter of them having a bad, bad night," he said. "We have to be very careful about that. It's nothing to be satisfied about. When we get up to Utah the balls will fall for them, so we'll have to play a lot better."

Whatever "a lot better" looks like, I doubt the Jazz want to find out. 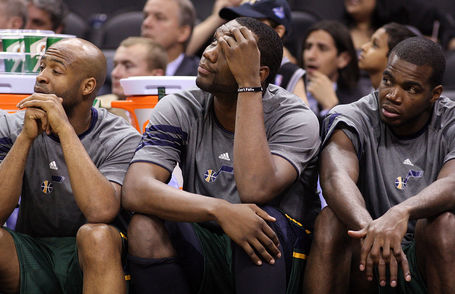 "Do you think it's too late to ask for a re-seed?"
Photo by Soobum Im/US PRESSWIRE

- San Antonio's biggest lead was 38 points and they never trailed in the game.

- The Spurs won the rebound battle 44-43 against the deep Jazz front line.

- After losing the transition battle in Game 1, the Spurs outran the Jazz 29-18 in fast-break points.

- The win gave San Antonio a 12-game winning streak, its longest of the season.