The Spurs and Jazz played a close game for the first half of Game 1 but the Spurs blew it open in the 3rd. Led by the veteran play of Tony Parker, Manu Ginobili, Tim Duncan and Stephen Jackson, the Spurs forced Utah to play at San Antonio's pace. The question for Game 2 is what adjustments, if any, the two teams will make.

The Spurs and Jazz played a close game for the first half of Game 1 but the Spurs blew it open in the 3rd. Led by the veteran play of Tony Parker, Manu Ginobili, Tim Duncan and Stephen Jackson, the Spurs forced Utah to play at San Antonio's pace. The question for Game 2 is what adjustments, if any, the two teams will make.

What can we expect from the Spurs in Game 2?

Tony, Tony, Tony. He has taken over the leadership mantle of the Spurs. His steady presence has been felt all season and will need to continue after a dominating performance in Game 1. The guard play from the Jazz has little hope of slowing the wee Frenchman down. "He is the reason that we have been successful thus far this season," Pop said at the end of Game 1. And he will be the reason for any continue success of the Spurs in these playoffs.

Not to be forgotten, Tim Duncan will be there as well, being once again the defensive anchor of this well-seasoned team. The future Hall-of-Famer may be on his final tour of the playoffs, but the way he has played this season could be an indicator of a returning Tim Duncan. One player in particular has enjoyed playing against the "old man." Before the start of Game 1, Al Jefferson told Tim Duncan that it was a great honor to play against him in the playoffs. And although the pundits will continue to marvel at the ability of Duncan to play at this level, Al Jefferson expressed that Tim is not as old as everyone seems to believe.

So what will the Jazz attempt to do in Game 2?

The arguments have been made, Here and Here that in order for the Jazz to win this series, they are going to have to slow the Spurs offense down. Yet, it is much easier to know what to do than to actually implement it.

Considering that the Jazz are a talented, up and coming team, they will have some growing up to do in this series if they have any hope of knocking of the heavily favored Spurs. They will be looking to slow down the smaller, faster Spurs. San Antonio loves to run and cut through the opposition's transition defense before they have a chance to set up. On the opposite side, the Spurs' transition defense is great at getting back and defending before the opposing offense can exploit them. Generally only one big man is left to rebound a missed shot by the Spurs. The other big man is already running down the floor with his other three teammates to set up the defense. Poor offensive rebounding is a direct result of Pop's tactic. Although poor offensive rebounding is a weakness, it is a detriment that Pop has chosen. 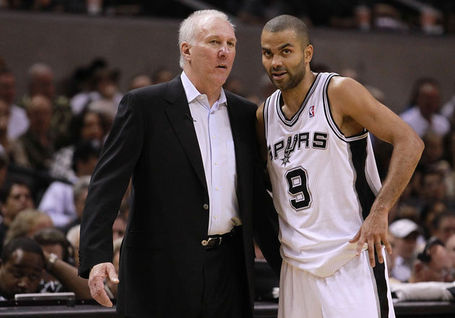 In order for the Jazz to slow down the Spurs they will be forced to counter-act this tactic of Pop's and change how they play their own game. Will Ty Corbin be willing to change his transition defense to slow the running Spurs? As a rookie coach, we have already witnessed his willingness to alter his starting line up to accommodate a superior foe. By startingJosh Howard, Corbin left a familiar, winning line up for an attempt at an advantage with an experienced veteran. Unfortunately for him, that experienced veteran had almost no positive impact on the game.

Corbin also failed to play his big lineup for an extended period of time. "I had to change it a little bit because they went small a couple times, and I didn’t feel good about our big lineup," he said. "They ran out a little bit on us and then they spread the floor." Given that Corbin has no playoff experience as a coach other than Game 1, and he has already shown a tendency to adapt, it appears that Corbin would be willing to not only change his starting line up again but to also change how his players play their game. And once again, Corbin will be twisting and turning in the trap that he set for himself all the while second guessing himself with his hypnotizing mantra, "This team (Spurs) is great at taking advantage of any mistakes."