I really don't know where to begin. We have won 16 straight games. That would be amazing in itself if we didn't win all by 3 by double digits. That's just incredible! I'm so glad that Pop is the one in charge of keeping the Spurs focused and no one on this blog, or Blair might've died from Koolaid poisoning as the playoffs began. There's really not much more for a guy like me to say about this team. Well, not much more than has already been said. So, I'll do my best to put some perspective on this series with an emphasis on game 3.

It sure is nice to have the second round completely underway. I was worried the Spurs wouldn't play again while waiting for the Clips and Grizzlies to finish duking it out. It would have been a shame too, because I have never had so much FUN (yes, I just said that word) watching basketball as I have watching this team this year. They're truly something special on Offense. I mean, in this series alone, the Spurs are averaging about 1.17 points per possession (a mark that would go down as the best offense ever in NBA history if it was sustained over the course of the entire season). They're also holding the Clippers to under 1.00 points per possession on defense. This is a very special team.

But alas, I must water down the Koolaid we've all been sucking in with a few stats: 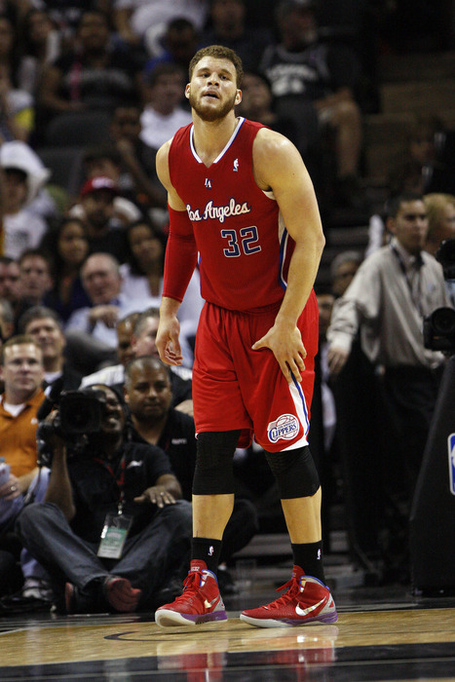 These are the two Clipper stars that are banged up the most. The drop-off of Chris Paul is almost Richard Jeffersonesque and unfortunately, I don't think the Spurs can be fully credited for this. We must remember that the Clippers were playing their 3rd game in 5 nights starting with game 7 against the NBA UFC fighters and they're "defense". We know as much as anyone how physically exhausting the Grizzlies are. So, I must agree with Pop that the Spurs haven't done anything special against Chris Paul. The guards have been aggressive and done fantastic at forcing him out of his comfort zone, but even a 50% Chris Paul is a dangerous Chris Paul, and kudos must be given to Pop for keeping this group focused. As Spurs fans, we know how fast an injury can change the scope of a contender (see 2000, 2008, 2009, 2010, 2011, I'm sure I've forgotten others). We can only hope that we don't catch the injury bug from the Clips (and be thankful we aren't playing against Bynum). At any point, Chris could get a shot of neuropozyne (Deux Ex reference; +1 nerd cred) and look like the MVP candidate that he was before the injury.

I think that Paul and Griffin play better this game. This is a do or die game for the Clippers and I don't think they are weak willed at all. They will come out with the kitchen sink (or they should) and it's up to the Spurs to weather that storm. Thankfully, games 3 and 4 are SEGABABAs. Wait! You're actually happy there are SEGABABAs in the playoffs? Why yes, yes I am... And I shall explain why. The Clippers are banged up, and every extra day of rest allows them to heal and treat their injuries. If they don't have a day of rest in between games, those hips and knees start to stiffen. Therefore, I think that even if the Spurs lose game 3, the odds are definitely in the Spurs favor for game 4.

Game Prediction: I think this game is close the whole way, with the Clippers leading at halftime. Pop will make his second half adjustments and the Spurs will win their first close game since the final game of the first round. Why do I think it'll be close? Because every ESPNer and their mother are trying to jinx us. Here is a list of people who hated on the Spurs up until last game:

1. Stephen A Smith
2. Bill Simmons
3. EVERY ESPN PERSON EVER

Each one of those has put out an article in the last 2 days telling everyone how awesome these Spurs are. Simmons even stating he'll wipe away the 2012 asterisk if we are successful in bringing home the Larry O'Brien trophy this June. Oh, gee thanks, so glad the best team in the NBA this year finally got your approval. So I expect the Spurs to win a close game as the Clippers play all out with the talking heads deciding that the Spurs can't beat the Clippers, thereby nulling any championship that they might win in June.

As a last note, I would encourage people not going over to Clipsnation after a Spurs win. Not because they haven't been gracious (which they have) but because members of that blog might think you are trolling them. Remember back when Manu broke his hand against the Wolves and we had a Wolves fan come to PtR. While he wasn't "trolling" per se, I don't think it was the best idea to come over to an opposing blog that just lost their best player of the season to date. Just use good judgment all around and we can continue to cultivate community between the two blogs. "Be above reproach" is what my old man used to say to me, and I think it's a good idea when thinking about commenting on stories.