And for those who missed any of the previous posts, here is:

These guys may be a little down on their luck lately, but they’re seasoned professionals and smooth operators and this ain’t their first rodeo. Taking home the trophy would be the heist of the century – are they up to the task?

These jailbirds don't get much love, but they've been getting results. Is this year's quest for gold more than just a suicide mission?

IN THE SECOND REEL OF... 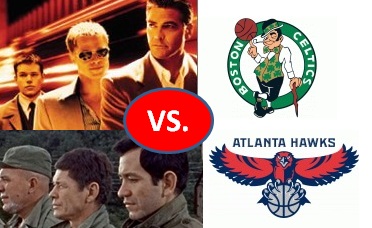 Getting in had been almost too easy. The guards appeared confused by Danny Ocean's arrival, but made no attempt to stop him as he strolled through the front doors of the chateau and up the grand staircase.

Ocean deftly retrieved his moustache, which had migrated to his left cheekbone, and reinstalled it upon his upper lip. "Willst du bis zum Tod, der scheidet, sie lieben auch in schlechten Tagen," he demanded.

The Nazi squinted quizzically. "Everything okay, Mr. Clooney? I didn't know you were even in this picture."

An ethereal voice cried out, "He's not!"

Danny Ocean spun on the heel of his pilfered jackboot and found himself staring into a pair of eyes as hard and cold as a producer's heart. The ghost of Lee Marvin waved a finger under the veteran con man's nose.

"I'm warning you, George!" Marvin's spirit scowled grimly. "This one ain't yours. Not ‘The Dirty Dozen', not this time. You can rob Frankie's grave, but you ain't robbin' mine!"

"Young whippersnapper." Taking a pull from a ghostly hip flask, Marvin looked Ocean up and down with withering scorn. "You've got some nerve, thinkin' you could pull off a Rat Pack remake. You think you can fill Frankie's shoes? Not by a country mile. I remember, back when we were shooting ‘Not as a Stranger', Frankie and me ended up in the Bronx zoo with a case of rye and a couple of sideshow freaks from the Barnum and Bailey Circus. When the booze ran out we took a penguin hostage and beat the shinola out of it when the reptile house attendant refused to take us to Cuba. Later we found out that it was Olivia de Havilland the whole time." The late Marvin sniffed. "That was a man. Not like you, ya smug pansy."

"Freude schöner götterfunken," Ocean retorted. Then he stepped hurriedly back as the shade of the venerable thespian advanced on him.

"You ain't the only one with an Oscar, sonny," hissed Marvin's specter. "And you ain't the only one who knows how to put together a marquee cast. You got Pitt? I got Bronson. You got Damon? I got Borgnine. And I'll put John Cassavetes and Jim Brown up against all the other creampuffs you've assembled. Hell, Donald Sutherland's a glorified extra in this picture! I wouldn't let Telly Savalas shine my shoes, but let's see you carry a series that runs as long as ‘Kojak'!"

Chill breath stung Danny Ocean's cheek as he pressed himself against the wall, shrinking from the ire of a bygone generation.

And then, in an instant, Marvin was gone. He vanished like breath from a mirror. Ocean blinked, and realized that a production assistant was pressing a decaf no-foam latte into his hand.

"You need anything, Mr. Clooney?"

The production assistant shrugged. "You mean the Trophy? Far as I know, it's in Vegas. Why?"

"Oh, okay. No reason." Ocean did that squint-smile thing he likes so much to do, and bustled hurriedly away.

They're fun, they're a charismatic ragtag band ... but are they in over their heads? Also, tell me that Blake Griffin isn't Buzz Lightyear. He's not flying, he's falling with style.

Who but a Bond villain could reliably bully organizations that should, in theory, be far more powerful?

IN PARTIER DEUX OF 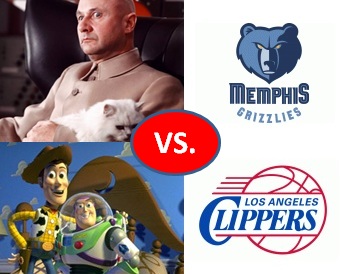 "So, this is the great Buzz Lightyear?" Blofeld dangled the battered hunk of articulated plastic by one heel. "I must confess, I am somewhat ... disappointed."

One could have described the Space Ranger's daring descent from his perch atop the lair's domed ceiling as either ‘flying' or ‘falling with style'. Regardless, the crash-landing had seriously reduced his retail value. Helmet cracked, right arm missing entirely, Buzz hung helplessly in the supervillain's grasp.

"I suppose," Blofeld continued, "you are here to rescue one of my little pets, eh? One of the children. Which one, I wonder?" The evil mastermind slammed the captive plaything against the wall with a cruel thud. "Come now, don't play inanimate with me."

"You monster!" Concussion had addled Buzz Lightyear's never-too-firm grasp on reality. Spitting paint chips, he glared into the eyes of his tormentor. "Do you expect me to talk?"

Blofeld pressed the red button on the action figure's chest.

"To infinity, and beyond!"

Cackling like a maniac, Blofeld gripped the petroleum-based interloper's ankles and yanked suddenly in opposite directions. He studied the sole of one newly-severed leg. "Andy, is it? Oh, what fun." Turning to the bank of monitors, he bent to study the image of a small boy who appeared to be ransacking his bedroom, searching ... searching...

"Tsk, tsk." Blofeld shook his head. "Did you really think you could save him, Mr. Lightyear? You? A mere trinket?" He frowned. "What? What's so funny, toy?"

The battered, dismembered plaything was laughing - and it was laughter not of hysteria, but of triumph. "Toy I may be," Buzz Lightyear replied, his voice drawling and deepening as a cracked battery slowly gave its last gasp. "But even ... a toy ... can lend a hand."

That was when Blofeld saw the pinprick of red light dancing across the control panel. He turned quickly - there, in Clint Eastwood-esque silence, stood a loveworn cowboy doll with a painted expression of grim determination. Woody was holding his friend's lost right arm - the one with the realistic laser-gun action.

"Somethin' you oughta know about us toys, partner." A fluffy white streak shot past Woody. "We may break easy, but we never, ever die." The red dot jiggled seductively on the lair's massive SELF-DESTRUCT button. "A toy can be fixed. But when you humans break..." The streak meowed in triumph as it pounced upon its prey. " ...you stay broken."