Share All sharing options for: Spurs cruise as Parker comes of age

SAN ANTONIO - Any weakness the Spurs might have - even those previously thought to be in existence - are becoming less identifiable by the game. Force them out of their initial set, they have enough great passers to continue with their secondary offense. Change the pace of the game or alter the look of your lineup and they adapt and match easily with the league's deepest, most dynamic bench. Since April 11 no team has figured out exactly how to beat San Antonio, and after a 105-88 win over the Clippers on Thursday it seems the blueprint remains undiscovered.

The Spurs were once again methodical in taking a 2-0 series lead after a 17-point dismantling of Los Angeles at the AT&T Center. And after being held to one field goal in the series' first game, Tony Parker was back to his MVP-caliber self. The Spurs point guard celebrated his thirtieth birthday with a 22-point performance while helping force all-world guard Chris Paul into eight turnovers in the matchup billed as the main event. Perhaps he was trying to prove he was still one of the young guys, but if you ask Manu Ginobili he'll tell you his long-time teammate passed the initiation for the prestigious 30-and-older fraternity.

"I welcome him to the club," Ginobili said with a smile, noting that he didn't think Parker liked it all that much. "(He's) one of the few from the good old Spurs that was below 30. So, welcome to the club."

Whether he's a fan of it or not, Parker now comes with the "old guy" label, one several of his teammates were tagged with long ago. But this squad doesn't resemble at all what you'd expect an old team to look like. Instead, it's a group of experienced players connecting with the prevalent youth movement in San Antonio. Those veterans know the importance of a great supporting cast, and alongside it have developed something special.

Systematically, the Spurs are operating to near perfection right now. In any efficient system, a glitch here or minor failure there can always be corrected or at least compensated for while the issue is solved. And while the Spurs' offensive efficiency has been the catalyst that has driven this group to a near-untouchable level, it's been the defense that has allowed all the kinks to work themselves out.

Not that there are many kinks to be found, but the defense has remained steady as teams continue to throw the kitchen sink at San Antonio to get stops on their own end. The Spurs might go through shooting lulls or brief periods of sloppy ball-movement, but with a 10-man rotation (even in the playoffs) full of skilled, high-I.Q. players these stretches of time are nothing more than temporary.

After building an early 15-point first-quarter lead, the Spurs went cold. San Antonio shot 38 percent from the floor during the second quarter, including 16 percent from the arc, but eventually it didn't matter. Despite the Clippers closing the gap and threatening to tie or take the lead, the Spurs' defense continued to play as crisply as it had all year. Outside of his decent shooting numbers, Paul was rendered ineffective in the best aspect of his game. It's not often you see the former Demon Deacon commit eight turnovers to only five assists. But it happened on Thursday. And when Paul isn't on top of his game, whether it be mentally or physically, the Clippers stand little chance against the best team going right now.

And even if the opposition uncorks an effective game plan against San Antonio, it's almost always going to be neutralized by the time the third quarter comes around. While the Spurs will undoubtedly make the requisite adjustments at the break, sometimes it just comes down to hitting shots. You might keep pace with this team for a while, but once the buckets start falling, hang on. San Antonio scored 32 points in the third quarter alone on a ridiculous 76.5 percent shooting, handing the Spurs the 11-point advantage heading into the fourth quarter. The Clippers were simply unable to keep up. When you outscore a team 50-18 in the paint while creating open shots from the outside at the same time, you're looking at a recipe for success.

The victory gives the Spurs 16 consecutive wins, during which they've been defeating opponents by an average of just more than 17 points per game during that stretch. In other words, they've been dominant. And, really, they only seem to be getting better. Still less than two months into his tenure in San Antonio, Boris Diaw is becoming not only a serviceable piece of the team, but a dangerous one. His ability to either shoot, penetrate or distribute makes him such a threat in the middle of the floor when one of the opponent's big men chases Parker on the pick and roll. Diaw finished the night hitting all seven of his shots on the way to 16 points, four rebounds and four assists. His rapid adjustment to a system notorious for complexity has been brilliant, and there's no question his teammates have taken notice.

"It's not easy to pick up a player that, that quick, can contribute so much (and be) so important," Manu Ginobili said. "He's starting, he's guarding one of their best players and doing it very well. He's scoring, passing the ball; I would say, for me, he was the player of the game today. He's just very solid and is making us a way better team."

Diaw's offensive talents have always been evident. It's his defense that has proven to be far better than anyone had ever thought. While it's true it's probably difficult to get a gauge on a player's defensive ability while playing for the 'seven-seconds-or-less' Suns under Mike D'Antoni, he had never before been labeled as a plus defender. On Thursday night he held Blake Griffin, one of the league's most explosive athletes, to only one rebound in the entire game. And as for notion the Spurs' system has always been difficult to learn, Diaw felt differently. After playing with Parker on the French national team he developed an understanding that made his decision to play in San Antonio an easy one.

"It's pretty easy to adjust to this team because of the way they play. They play smart basketball and it's easy to recognize and to see what to do," Diaw said. "I'm just trying to be an addition, so it's a pretty easy role. I'm just trying to do my best, I'm here to play good defense and not turn the ball over too much." 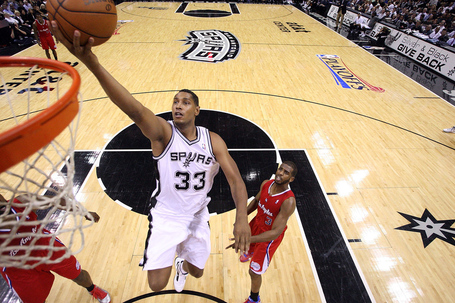 Simple. Just the way Pop wants it. There's not always a need for complexity in this game, and right now the Spurs are proving that. Learn your role, know it well, execute properly and the rest will fall into place. And because of this mindset, San Antonio is making this look easy. Even when faced with a small deficit or close game, there hasn't seemed to be a concern that the outcome was ever in doubt during this 16-game jaunt.

Following the game, Pop was asked if he could talk about the hot streak his team has been on during the run that has sustained itself for the last 37 days. Popovich, ever the loud-mouth, had a quick answer.

Even sitting so prominently on the national stage, some things in San Antonio will always be left unsaid. On the other hand, there are some things that need to be dealt with. There is some air that must be cleared, some sense of denial overcome.

With the post-game presser dying down, Jeff McDonald of the Express-News asked Parker if now, in the midst of his eleventh NBA season, he finally felt old.

One year older. One year wiser. The best he's ever been.

-- Danny Green was awesome, especially during the third quarter. The Spurs' starting shooting guard scored 13 points, including 4-for-6 from beyond the arc. Ten of those points came in the game-changing third frame.

-- The Clippers managed to shoot nearly 70 percent from the three-point line, but poor interior scoring and 18 turnovers prevented them from making any threatening runs throughout the game.